Having only seen a sparse few (but always having been intrigued to catch up with them), I figured now was as good at time as any to accept a friend’s prodding and begin to catch up on some of the wonky output — made by that cabal of eccentric, often crazily inspired filmmakers — of the European sci-fi apocalyptic rip-off craze that those ever-shamelessly enterprising Italian financiers were frantically rushing to cash in after the international success of John Carpenter’s Escape From New York and George Miller’s The Road Warrior. 2019 also had the added pedigree (for me, anyway) of being directed by one of the constantly working maestros of the Italian exploitation era Sergio Martino, a director who may never have reached the heights of (deservedly) worshipped directors Dario Argento, Lucio Fulci or Sergio Leone, yet was able to cut as wide a swath of success (admittedly, along with a pile of serious dreck along the way) across the many varied 60’s/70’s/80’s exploitation subgenres as any of those greats. To name just a few, his Your Vice is a Locked Door and Only I Have the Key is a brilliantly bonkers giallo, Mannaja/A Man Called Blade is a solid later spaghetti western and The Violent Professionals is as tough a poliziotteschi as any I’ve seen (though admittedly, I haven’t seen a ton). 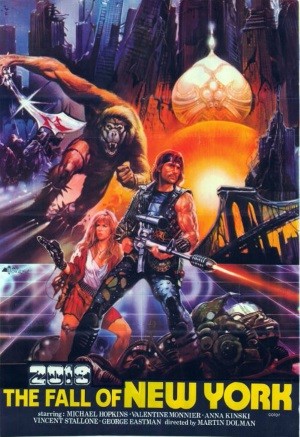 Apparently plucked from the world of international fashion modelling, 2019 lead Michael Sopkiw may be unable to act his way out of a paper bag, but he’s certainly a competent enough of a stand-in presence for the Snake Plissken role herein (with 80’s head band instead of eye patch – man, for films supposed to be set in the future, those Italians never fail to reference bad 80’s fashion) that I’m surprised he never got on that Italian exploitation assembly line to make any real further splashes in the scene.

The extended action sequences, shoot-outs and gory bits are shot with that particular gung-ho excitement familiar to the best of the Italian exploitation masters, and yet 2019 sets itself apart by having a genuinely intriguing premise; the story follows the Sopkiw character being tricked by the shady government/corporation named the ‘Federation’ (always love the overt distrust of the wealthy powers that be — long before the Occupy Movement brought that term, and all that it entails, ‘the 1%’ to everyone’s attention — these Italian guys bring across the entire spectrum of their exploitation efforts) — into sneaking into nuclear-ravaged New York City to retrieve the final hope for humanity – that is, amongst the contamination, a last, healthy fertile woman. In fact, it’s a premise so intriguing that major Hollywood filmmaker Alfonso Cuaron used it in 2006 for his visually stunning and profound Children of Men.

Like so many of these films (though not always with quite the same enthusiastic directing prowess that Martino brings), 2019 manages to creatively turn it’s low budget into an off-the-wall, unashamed aesthetic, with the odd costumes and the crude yet amazingly inventive optical trickery (that the Italians had been doing brilliantly since forever) creating a highly enjoyable milieu that, despite the shortcomings, remains consistent throughout. I mean, does Children of Men have Italian genre vet George Eastman as a very large city dwelling mutant (vaguely looking a bit Planet of the Ape-ish) who our hero is constantly having to fight off from putting his greasy paws all over that last fruitful (comatose) female? I don’t think so!