“In the year 1990 the Bronx is officially declared No Man’s Land. The authorities give up all attempts to restore law and order. From then on the area is ruled by the Riders”.

The 17 year old female soon-to-be heiress of the massive world-controlling weapons manufacturing giant, The Manhattan Corporation (which, even in this simplified presentation, comes painfully close to an accurate representation of the insidiously corrupt and perverse corporate/military/weapons industry today and the path of worldwide destruction it’s causing – hiding, of course, behind that great Orange Boogeyman to blame everything on; with the US media excitedly frothing at the mouth over weapons celebrations like the dropping of the “Mother of all Bombs” and MSNBC’s Brian Williams reverentially mis-quoting Leonard Cohen as missiles shot off behind him reigning down death and destruction upon the wicked and righteous alike in the Middle East, can a nuclear apocalypse really be far behind? I say bless these Italian exploitation-makers their socially-anarchic hearts) runs off into the lawless concrete jungle of the Bronx to hide… only to be caught and ultimately protected by the leathered out biker group, the Riders, who end up in internal conflict with their leader Trash, as his desire to protect the little lady leads them under assault by the psychopathic (and you know he is, because he bursts out in maniacal laughter whenever he causes mayhem) hitman Hammer (played by one of those character actors with a great face always willing to do anything for a buck or two, the late Vic Morrow – who also happens to be actress Jennifer Jason Leigh’s Papa Bear). 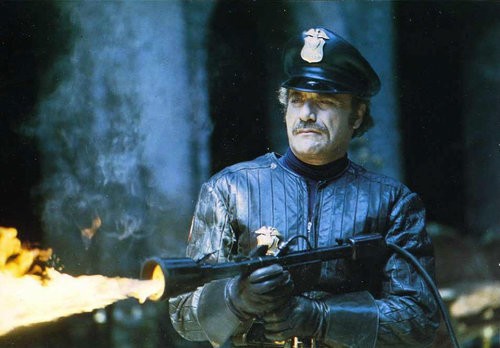 The unabashed way this Italian sci-fi wannabe epic heists from John Carpenter’s Escape From New York and Walter Hill’s The Warriors (and a bit of Mad Max, just without an official nuclear or climate apocalyptic background, but rather some kind of economic, fascistic one) is, as usual with these Italian knockoffs of so many stripes, a major part of the charm. Important Italian exploitation genre filmmaker Castellari’s simple, muscular approach to action scenes and storytelling, as well as the barebones narrative (common to all three films that make up his post-apocalyptic-ish trilogy) may not be as atmospheric (or anywhere near as intriguing premise-wise) as the Sergio Martino entry in the genre I watched previously, 2019: After the Fall of New York from 1983, it still remains a more than engaging viewing.

The various ruthless gangs are even more colorfully and flamboyantly absurd (with each heavily armed with their shtick, such as the roller skate crew with hockey sticks — hockey sticks! — and wearing flimsy fiberglass protective gear) than in The Warriors, with the underlying homosexual question marks of that previous film brought so much more out of the closet with the all-male muscular boys fighting and friending across the landscape, with lots of swishy gangs along the way (and if there’s any question about Castellari going this way with the films, just watch the last film in the series The New Barbarians, where you can almost imagine him yelling “Don’t forget, be-a gay, gang members! Be-a all a-gay!”). It’s hard to quite gauge director Castellari’s take on all this — other than to say it’s certainly amusing.

The very young Mark Gregory as Trash is one of the oddest intriguing ducks of an action leading man I’ve ever come across — I mean, he certainly has one of the most imposing physiques of any of them, which is clearly why Castellari hired him (apparently he saw the kid working out at his gym one day), but with that strange, giraffe-like gait while attempting to look tough strutting through his Hell’s Angels crew — how are we possibly supposed to take that serious?

Castellari always brings exciting visual flair (right off the bat with a lively presentation of leather, studs and weaponry, as an unseen Rider gets dressed for daily battle in the opening credit sequence) and the film is chock full of familiar Italian genre exploitation regulars from the international front. Fred Williamson is engaging in his usual broad, over-the-top acting style (he’s never been one for finding the subtlety in a moment) that manages to somehow be winning, while revealing the actor himself to be entirely egomaniacal at the same time. I always like seeing Morrow, especially when he’s whooping it up psychopathically, and Chris Connelly, as the down-on-his-luck driver caught between good and bad, delivers the most human performance in the film. There’s also that very large Italian genre fan favourite George Eastman (for a few minutes anyway), as a pony-tailed, gang heavy.