Lost at Sea: A Reappraisal of Ridley Scott’s 1492: Conquest of Paradise

It’s interesting to note how many of Ridley Scott’s finest films are among his least heralded, his most dismissed and forgotten. Obvious classics like Blade Runner and Alien aside, this seems to hold true now for the bulk of Scott’s body of work and may provide a helpful key to understanding that work better. Upon review so many of the highly regarded films seem less compelling than they once did or even overrated. This is especially true of Thelma & Louise, his clearest shot at a supposedly sophisticated and important statement. That picture still works in its most ecstatic moments but fails utterly to be convincing in its overworked political details and larger schema. Meanwhile, there is much to be said that still has not been sufficiently said for The Duelists, Legend, Someone to Watch Over Me, Hannibal, Robin Hood, even G.I. Jane and Exodus.

But even amongst all of these, the neglect of 1492: Conquest of Paradise (1992) is a particularly egregious oversight that demands to be addressed. Rather than being outright condemned, 1492 has mostly just been ignored. It’s seen as politically unfashionable (obviously) but in broad dismissive terms that suggests an utter disinclination to engage with it at all. It’s also seen as aesthetically dubious in terms of how Scott applies his signature elaborate gloss technique to this particular charged material. But beyond that it’s exactly because he does not or is not able to reduce the material to any one particular agenda that renders it so strong and vital, unlike what occurs with the all too clearly determined messages of Thelma & Louise.

Any film like this is going to come across as an apologia to many now, but it will be left to the individual to decide whether indeed that’s a justifiable criticism or the evidence of a specific cultural response. It is likely both, but art like this is rarely seen that way because the political rhetoric surrounding it is too highly charged and polarized for that to be possible. It’s to Scott and his film’s credit that he does make it possible. Some have regarded this equivocation on the historical content and refraining from coming down in obvious overt judgment upon Columbus, as suggestive of a failure of nerve on Scott’s part, a terminal indecisiveness. But this attitude discounts the ample evidence in the film that suggests this was a fully conceived narrative strategy, in an effort to significantly complicate our own response via the tools of aesthetics and mythmaking. This is dangerous territory as it risks falling into the hands of pure apologists or those with nefarious agendas, but it is also central and crucial to the variety of artistry Scott engages in. And 1492 bears the merits of the results. 1492 is among Scott’s most perfectly realized works, surprisingly unburdened by the weight of satisfying any one agenda; instead it is weighted toward a steadily paced documentation of conflicting details, though one always shot through with an extremely necessary aspect of romanticism. 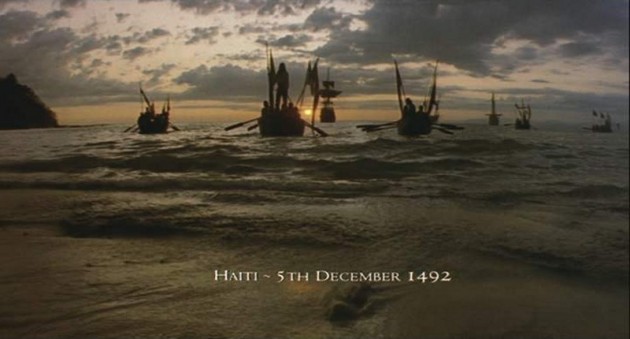 The romantic myth is necessary to this portrait simply as an acknowledgment of a motivating reality. But Scott uses that to augment all of the compromises and inherent disappointments and even the alternative suggestion of the inadvisability of the central quest. This latter retrospective assessment is counterbalanced though by the idea of an initiating idealist vision. This, in turn, is complicated by the concentration on economic and political circumstances which constantly conspire to compromise any such vision or to render it as unreasonable or dangerous. Of course the argument is that it was never so ideal to begin with but that undervalues the possibility and reality of such a motivating force. For Scott, Columbus functions as a figure who is ultimately undone by his own idealist naïveté and accompanying hubris; he represents that idea and that is what is important, not an exacting notion of a one-sided historical reality which in its own way is no more or less convincing. This links him as well to many other similar figures in Scott’s films who embody a mythical, even an explicitly fairy tale idealist notion of a certain kind of purity (there are many but obviously the characters in Legend qualify as the perfect exemplars but so does Julianne Moore in Hannibal or Orlando Bloom in Kingdom of Heaven). However, Scott usually allows these scenarios to exist uncomplicated by anything except the most direct challenge to that idealism. Here though the water is made progressively muddier throughout and that accounts for much of what is most fascinating. It may be this very confluence, the either/or and neither/nor capacity of it all, that irritates many and puts them off.

But the overriding irony of 1492 is present from the beginning, implicit in its very title. If this film was interested in only celebrating an idea of Columbus’s victories, it would have ended an hour and fifteen minutes in, when those ideals are least disputed (within this cultural context anyway). Roll credits. But it does not. It carries on and documents the disintegration to follow. In that way the film’s figure of Columbus is made progressively more sympathetic —another aspect which may have upset many— but those mixed feelings should not be resisted but understood as vital to the film’s point. 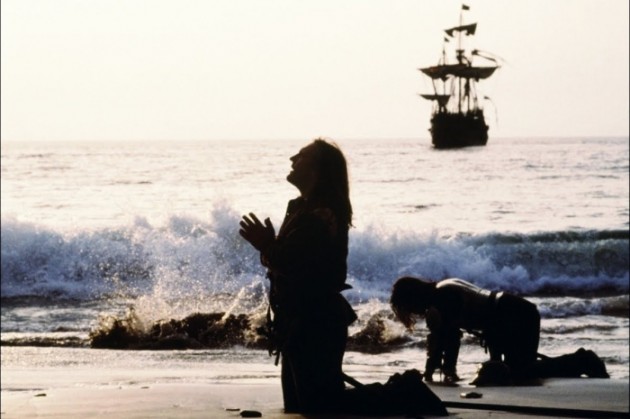 Much has been made of the inappropriate casting of Gérard Depardieu as Columbus. Once again this is a viewpoint that privileges a criteria of rigorous realism that was never relevant. The fact Depardieu was actually very good in the role is likely another source of contention. Depardieu’s presence alone is a reminder of a discordant element, an appropriately “foreign” element which seems fully intended. The relevance of class and national lineage are emphasized without overstatement. But it may be Armand Assante who has the most fascinating role as the treasurer of Spain whose own assumptions are challenged by both the accomplishments and failures of Columbus. He is pensive and bemused and troubled by being so. The emphasis is on the conflict and tension between exploration and stasis, world making and the indulgence in an already established world. The protracted sequence of hoisting up the central town church bell in the new island community has often been singled out for disdain but its triumphalist tone are crucial because the very idea of that triumph is what that scene is about. It’s easy to be dismissive or indignant toward what that may represent in a larger context, but to do so overlooks the central and fundamental assertion of its elemental reality. It’s no mistake, and no overreach either, that this calls to mind the famous similar scene in Andrei Rublev. On a like note, much of 1492 forecasts what Malick would be doing a few years later with his own narratives of presumptive Edenic life disrupted. The parallels with The New World are clear enough but also to Thin Red Line (note in particular the long shots of small exploration parties situated at a distance with guns going off in small explosions, both a harbinger of destructive tendencies and an acknowledgment of the ultimate scale of this “conquest”).

On a strictly aesthetic level the film is phenomenal as one would expect. Adrian Biddle’s cinematography is tremendous and it is outrageous to think that the film has never received even an official DVD release in the United States, though that may be for many of the reasons discussed above. It’s a gorgeous film but a more nuanced one than might be assumed. Throughout there is an effort to marry Scott’s high power gloss with the shifting shadows and heightened performance style (extending to blocking too) of early silent film. Vangelis’s monumental score meanwhile provides ballast and weight; the score has continued to develop in estimation and is now seen as equivalent to his work on Blade Runner. Finally it must be said that the film features one of the greatest endings in all of cinema. If that sounds unjustifiably hyperbolic, it is not. Its quiet perfection and precision is stunning, an understated comprehension rare in Scott’s work, that this final stroke aptly communicates.