After writing my essay on Tarkovsky in the last issue I rewatched Ivan’s Childhood and saw elements that pushed me into further thoughts on the relationship between nature and his aesthetics, which led to a follow-up essay, which led to other Tarkovsky essays, all of which leads to this second issue on the subject of Andrei Tarkovsky. I have no qualms about returning to Tarkovsky so soon, since it has been a while since he has featured in Offscreen, plus my admiration for this director knows no bounds. There are few directors whose work continually renews itself with each repeated viewing, and this is the ultimate reason for why I have returned with this Tarkovsky redux issue. In my opening essay I return to the subject of nature in Tarkovsky’s work, but reduced the study to the singular subject of the tree. First time writer David Hanley continues the theme of nature by concentrating on one of Tarkovsky’s two forays into science fiction, Solaris, a film whose textual richness has made it one of the most (indirectly) influential films of the last twenty or so years (which is the subject of a recent book, by Steve Dillon, The Solaris Effect: art and artifice in contemporary American film, 2006). In some respects it has become the “Vertigo” of its generation. The third essay on Tarkovsky, also featuring a first-time writer, Zoë Heyn-Jones, looks at the other of his science-fiction films, “Temporal Defamiliarization and Mise-en-Scène in Tarkovsky’s Stalker,” which applies Kristin Thompson’s concept of the excess to a reading of Tarkovsky’s particular time-based aesthetics. The final two essays deal with Japanese cinema, Hanley’s essay on Japanese action film of the 1960s, 1970s, and Alireza Vahdani’s essay on Yôji Yamada’s Hidden Blade, 2004. Leave it to me to find a connection between these two blocks of essays. Tarkovsky was an admirer of Japanese culture from early on, with Kenji Mizoguchi and Akira Kurosawa often being cited in his personal pantheon of directors. Tarkovsky became increasingly interested in Japanese aesthetics as he got older —haiku poetry, music, philosophy, religion— something that becomes most evident in his last film, The Sacrifice. It is common knowledge that Kurosawa was also a big admirer of Tarkovsky, and met Tarkovsky during one of his several trips to Russia, even visiting him on the set of Solaris. Tarkovsky and Kurosawa seem to have hit it off quite well. Kurosawa’s recollections of this meeting, which is available through the wonderful online Tarkovsky resource Nostalghia, make for some memorable reading. On my most recent viewing of Stalker I noticed something for the first time that intrigued me: during the sequence where the three men drive through the narrow city roads, attempting to elude the authorities and make their trek to the Zone, the camera films them in the car at the end of a long narrow lane-way. Scribbled on a wall to the left of the lane-way are the initials A.K.. Akira Kurosawa? (Donato Totaro, ed.) 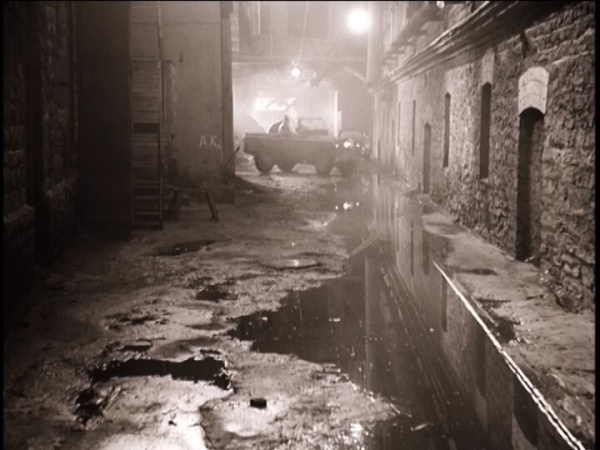