In this first issue of 2013 we look back at three important film festivals, some well known, Cannes and Venice, the other less so, The Boston Palestine Film Festival. While the first two need little introduction, as they are two of the most famous of the 14 festivals sanctioned as ‘competitive’ film festivals by the FIAPF (Fédération Internationale des Associations de Producteurs de Films), the ‘smaller’ Boston festival is one with slightly different goals. As first-time Offscreen author Raphael Kornig notes, quoting Kenneth Turan, the BPFF is a “festival with a geopolitical agenda,” as opposed to “festivals with business agendas” and “festivals with aesthetic agendas.” Koenig does an admirable job of outlining the cultural (and political) nature and importance of this festival. Virginia Wexman gives a clear-headed overview of the Venice Festival’s 2012 focus on women and women themed films by using Laura Mulvey’s by now cinematic truism about how classic cinema objectifies women by their passivity, the omnipotence of the male gaze, etc., as a counterpoint to a body of films (mainly by women but a few by men) which do not subscribe to this Mulvian precept about classic Hollywood. Wexman goes beyond the films shown on screen to the the broader gender-related attitudes expressed by male critics attending the festival, many of whom (to Wexman’s disappointment) chose to overlook the Festival’s incentive to promote the theme of women, by highlighting other thematics and events. Pierre Pageau returns once again from Cannes, with a report that focuses on the particularly high number of films from the United States in official competitions, noting in six of these ‘new’ American films a collectivity of spirit and values that suggests a new emerging ‘National cinema.’ The final two non-festival essays in this issue are Calvert’s ‘ideological’ reading of the latest hugely successful installment in the ongoing James Bond series, Skyfall, and Garrett’s essay on David Cronenberg’s fascinating meditation on the intellectual, social and cultural impact of two figureheads of twentieth century thought, Freud and Jung, A Dangerous Method. The general context of modernity which informs Calvert’s review of Skyfall, forms the direct context of Cronenberg’s subject, as Freud and Jung (along with other key figures such as Charles Darwin in the area of social theory and Karl Marx in the area of economic theory) were at the forefront of the revolutionary ideas of the late 19th century/early 20th century that shaped the understanding of modern ‘humankind’. 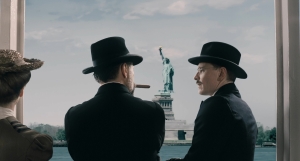 Freud and Jung arrive in the New World
Follow @Offscreen2