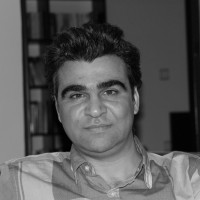 Mansoor Behnam is a media artist, writer/poet, and researcher in the fields of comparative literature, film and cultural studies. He is currently finishing his PhD studies, working on an art/research project in the Cultural Studies program at Queen’s University. As the creative component of his project, Behnam has used tenets of Persian medieval mysticism (Sufism) to conceptualize a practice-based theory of “Mystical Experimental Cinema.” His research is also informed by his experience of immigration to Canada. Behnam’s work has been screened and discussed in film festivals, artist-run centers, and universities. His collection of poetry titled Opposite Dreams (2014) is currently in the works.