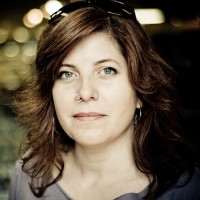 Kier-La Janisse is a film writer and programmer, Owner/Artistic Director of Spectacular Optical Publications and founder of The Miskatonic Institute of Horror Studies. She has been a programmer for the Alamo Drafthouse Cinema and Fantastic Fest in Austin, Texas, co-founded Montreal microcinema Blue Sunshine, founded the CineMuerte Horror Film Festival (1999-2005) in Vancouver, was the Festival Director of Monster Fest in Melbourne, Australia and was the subject of the documentary Celluloid Horror (2005). She is the author of A Violent Professional: The Films of Luciano Rossi (FAB Press, 2007) and House of Psychotic Women: An Autobiographical Topography of Female Neurosis in Horror and Exploitation Films (FAB Press, 2012) and contributed to Destroy All Movies!! The Complete Guide to Punks on Film (Fantagraphics, 2011), Recovering 1940s Horror: Traces of a Lost Decade (Lexington, 2014), The Canadian Horror Film: Terror of the Soul (University of Toronto Press, 2015), and We Are the Martians: The Legacy of Nigel Kneale (PS Press, 2017). She co-edited and published the anthology books KID POWER! (Spectacular Optical, 2014), Satanic Panic: Pop-Cultural Paranoia in the 1980s (Spectacular Optical, 2015), Lost Girls: The Phantasmagorical Cinema of Jean Rollin (2017), and Yuletide Terror: Christmas Horror on Film and Television (2017). She is currently writing A Song From the Heart Beats the Devil Every Time: Children’s Programming and the Counterculture, 1965-1985, as well as monographs about Monte Hellman’s Cockfighter and Patricia Birch’s Grease 2, and is in development on a narrative television series based on her book House of Psychotic Women with Rook Films (Free Fire, Duke of Burgundy, A Field in England).