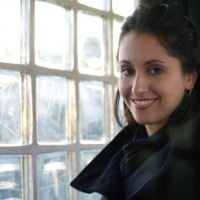 Anna Fahr is an independent filmmaker whose work focuses on the contemporary Middle East and diaspora. Her latest narrative short, Transit Game (2014) examines the current refugee crisis in Lebanon against the backdrop of the Syrian war. The film has screened in dozens of festivals internationally winning awards in Berlin, Florence and San Francisco in addition to winning a Golden Sheaf Award for ‘Best Drama’ at the Yorkton Film Festival in Canada. In 2006, Anna independently produced/directed/edited the feature-length documentary, Khaneh Ma: These Places We Call Home, which examines issues of cultural identity and dual nationality from the vantage point of three generations of Iranians living in Iran, Canada, and Germany. The film screened theatrically at the National Film Board of Canada cinema in Montreal and in festivals worldwide. Anna holds a B.F.A. in Film Production from Concordia University in Montreal and a Master’s in Film and Middle Eastern Studies from New York University. In additional to filmmaking, Anna is an educator who has taught at NYU’s Tisch School of the Arts and in the department of Communication Arts at the Lebanese American University in Beirut.