A ‘three time loser’ just released from his latest prison stint (Henry Fonda), armed with the love of Joan, tries to go straight, only to find fate – and mankind — working against him. Fingered for crimes he didn’t commit, he goes on the lam and a crime spree with his love (with her now elevated to mutual criminal status, ala Bonnie and Clyde).

A number of years ago at a two week-long theater program that screened Lang’s entire post-European output, it struck me then, as now, that You Only Live Once, with its powerfully uncompromising and unsparingly harsh look at class injustice (with hints of the witch-hunt prejudice ready to boil up out of the complacent masses at a moment’s notice that Lang had terrifyingly experienced in pre-war Germany, and that had tempered much of his European work, leading to his films being banned by the Nazis and Lang escaping to America) may be his true American masterpiece (close to being up there with his German classics – M, Metropolis and The Testament of Dr Mabuse – only with a decidedly socially conscious American flair). 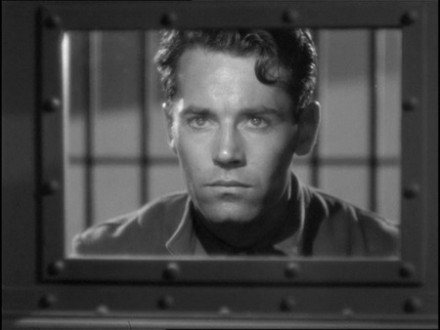 Sydney, as the innocent who bravely refuses to give up on a dream not just of mindless subservient love for a man, but for a transcendent state of sharing and sacrifice, is haunting in her simple manner and Fonda, with his quiet seething determination before the insurmountably oppressive socio-economic injustices he faces, even as he commits murder to survive, delivers a performance of bubbling anger and yet towering dignity, and perhaps may be — along with his just paroled Tom Joad in John Ford’s Grapes of Wrath just three years later — his greatest hours; that is, a perfect mix of performance, material and a director who understood how to get the most out of the actor’s persona (a trait not unfamiliar to almost all of the great legendary directors from the first half of Hollywood cinema, including Ford, Hawks and Walsh).

With its two main characters flailing helplessly against a system they can’t possibly defeat and an uncompromisingly grim world view, including a sense of palpable violence that hangs over the proceedings (even with the 15 minutes cut out prior to the film’s original 1937 release that were deemed excessively violent by the Hays Code), You Only Live Once has often been called an early example of film noir (which most scholars say started in earnest in the mid-40’s as a reflection of the anxiety that burrowed into the troublingly uncertain post-war American psyche) and that may be true, even without a lot of the stylistic elements that would soon begin to define the genre; such as, there is no real femme fatale and the lighting, while often referencing Lang’s own German expressionism, with moments such as prison bar shadows violently slashing across the ground, doesn’t really have that amped-up high contrast quality that will eventually become so familiar. What it indisputably does have, however, is the intensely corrosive perspective of an escapee who witnessed a society caught in the terrifying frenzies of starting an insane war and who could see these same underlying tendencies towards madness and demonization even in an American Democracy. Not surprisingly, there’s so much wonderful visual cinema on display, with moments such as the two not-yet-on-the-run lovers comparing themselves to the frogs in a small pool who stay together forever (which also alludes more darkly to a tale from his troubled youth the Fonda character has told earlier in which his cruel friends used to pull the legs off frogs to watch them squirm around and die), only for us to see their reflection in the water suddenly wiped out by a ripple of water, visually reinforcing their own troubled fate.

The ending of this masterpiece manages to turn what seemingly appears to be a quasi-religious (Christian) ending of salvation and comfort (along with a maintaining of the status quo by ridding the world of the bad guys) into something deeper and darker, hinting at a nihilism that only a German ex-pat at that time could have understood and been able to convey… but which plenty of American directors would become more familiar with in their own way by the end of World War Two, in which the American GIs returned to find the world had changed in ways they no longer could recognize.