As part of the final push in our viewing program of all-things “Alien” (now in the shameless “Alien” rip-off selections), not only did our little cinema club delve into the wonders of that gloriously grotesque, wildly inspired and colorful alien-invades-the-home-disguised-as-daddy-leading-to-all-sorts-of-unsettling-and-yucky-imagery tale – i.e., 1982’s still fairly infamous Xtro – but I convinced them to go all the way, try and make it an orgiastic night of gooey shenanigans, with not only that wonderful first film on display… but also taking in the two sequels that crazy man Brit director Davenport (and I only call him a crazy man because I met him personally… and he’s a crazy man) managed to squeeze out of the surprise success of the first film.

So… it’s eight years after the events of the first film and… who cares? Other than the title, there is zero connection in the narrative between the events of this ‘sequel’, dealing with a small group of scientists and the military hardhats protecting them, stuck in a secret underground lair fighting against the savage extra-dimensional creature that their secret government experiments have unleashed, and the first film, which dealt with some nasty form-shifting aliens from outer space. 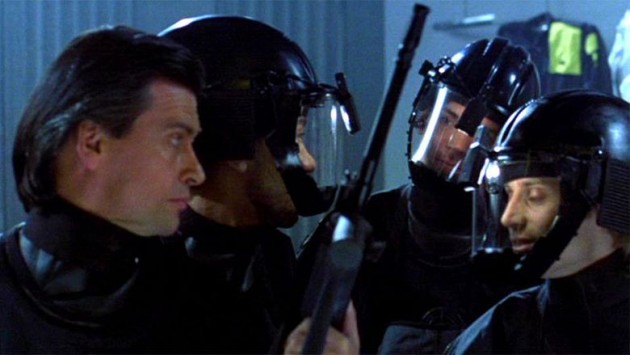 I mean, Harry, I know that time we met you were completely (and, dare I say, unacceptably) dismissive of the deeply perverse pleasures of the first film you concocted, and perhaps that’s what led you to completely move away from it for this sequel (while, of course, trying to benefit from the name success), but couldn’t you have included at least some connection — say, a distant relative character of the first film’s family who was so haunted by the events it led him to become one of the scientists obsessively searching for alternate dimensional lifeforms? Or, much more importantly, at the very least, not following up such a wonderful slice of transgression with this… almost entirely forgettable affair?

To be fair, it’s not all Davenport’s fault. With its 90’s tv style flat lighting (plain as day even in this obviously taped off VHS multi-generation downstream youtube recording), reliance on uninteresting medium to wide shots (the better to get the scene shot and done, and move on) and sub-par lead actors (who seem capable of little but unmotivated overwrought intensity towards each other right off the bat) and super-cheesy lo-fi graphic effects for things such as the ‘teleportation’ scenes, Xtro II has the unfortunate telltale signs of being a standard, not particularly charming, rushed Canadian production of that time. But it’s the lack of ambition in the storytelling, which plays out as a (very) low-rent version of James Cameron’s Aliens that falls much more squarely on Mr. Davenport’s shoulders. 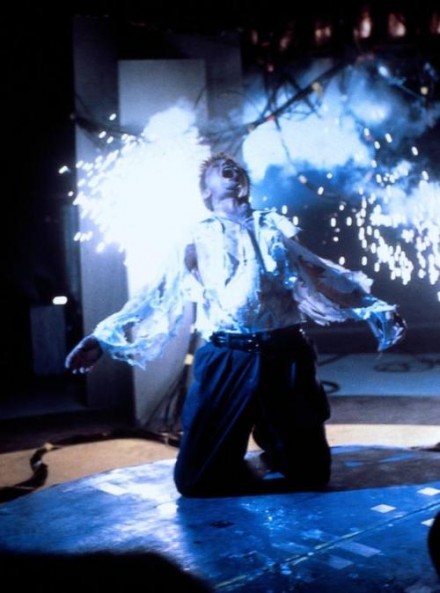 In another seemingly determined move towards that greatest of all cinematic sins known as mediocrity, instead of providing another odd, wonky home-grown electronic score (a la, the first film), Harry (I’d like to believe the director and I are on a first name basis, though he likely barely remembers me having set foot in his Hollywood Hills home over a decade ago – though hard to blame him with all the substances ingested between us) left the music to a couple of low-brow literalists, who could only manage to quasi-ape the sort of overbearing pro-military jingoist score moments of James Cameron’s Aliens… with none of the seductive grandiosity and pomp of that classic monster movie/military propagandist saga.

The presence of the infamously booze and drug-addled actor, the late Jan-Michael Vincent (the clear ‘name’ they could throw on the box cover for the VHS release), still looking lean and handsome enough, as the discredited scientist, scapegoated after running the last interdimensional experiment that went mysteriously and tragically awry, who they call back in to try and save the day, adds some interest… but not in any good way for the film. Never the most accomplished of actors in the best of times, Vincent comes across as almost comically (if you can manage to ignore the tragedy of his life) dis-associated from the proceedings, with him often shot in single close ups, apart from everyone else, with line readings barely matching up with the emotions; whether involving his romantic entanglement with the head female scientist, or his tension with her jealous male colleague/rival, it feels like they’re managing to clean him up just enough from some frenzied bender he’s deep in the throes of, for him to stumble through a few scenes and concentrate just enough through the addled fog to repeat back the lines he’s being fed from off screen (and who allowed that wardrobe of collared shirt, comfy jeans and loafers to run around alien hunting in??).

As disappointingly mediocre and forgettable as the whole effort is, Xtro II does have a worthy moment or two. The by now de rigueur alien popping out of its unsuspecting human host scene, while nowhere near as spectacular as the one that started the whole cycle, 1979’s Alien (or as shamelessly grotesque as the one in Xtro!), it still manages to be fairly effective, even while showing as little as possible, and there are a few moments of things exploding in the middle of the alien rampage that are appropriately impressive (the elevator crashing to the bottom of the shaft with Vincent going flying being the best). 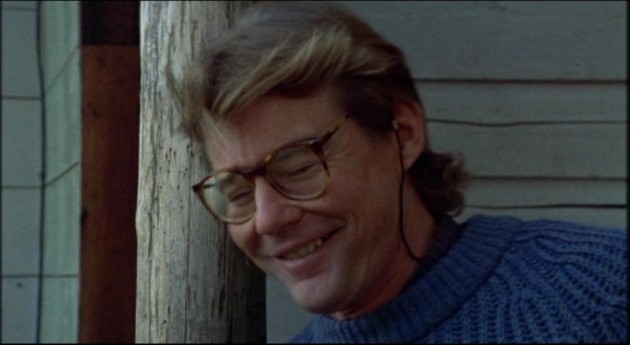 Overall though? I guess I can’t really blame my film comrades for not completing our mission (though, down deep? I do blame them) and bailing after Xtro II, as it was hard to convince even myself, after the unrelenting mediocrity of this first sequel, that Bromley-Davenport would somehow find that crazed glory he channelled for the original in his second sequel Xtro 3: Watch the Skies. As I watched my coterie filter out into the late night, leaving me alone, enveloped in the white glow of my projector bulb, I realized I would be on my own… but more on that one in a later post, of course.