Bolstered by the financial success of his previous year’s effort (man, these directors certainly got to ply their trade back in the day, didn’t they), the espionage thriller (often argued as a first of its kind) with a typically (if slightly less interesting than usual) Mabusian villain straight from the shared heart of Lang and his right hand wo-man and wife Thea Von Harbou, Spies, Lang just had to leap off the ledge and take on another of his precariously massive, dangerously ambitious (and financially terrifying for the studio) efforts, this time a speculative sci-fi tale detailing the first fictional trip to the moon (with a melodramatic love triangle between a few of the travellers thrown in to keep the plebes from getting too fidgety in their seats).

As was traditional to this kind of ‘fantastic voyage’ film in the early days of cinema, when effects were sparse, difficult and prohibitively costly to achieve (even when, as in the case herein, the studio eventually does go whole hog on the expenses once we get there), a lot of screen time was spent on less financially draining build-up and character conflict establishment (the most classic example, of course, being all that Fay Wray backstory in 1933’s King Kong that used to drive me crazy with frustration each Thanksgiving Day as a kid when I’d watch it on American television waiting anxiously for the arrival of the big gorilla)… and Woman in the Moon is no different. It’s at least an hour and forty minutes into its just under 3 hour running time before our intrepid voyagers (and the young adventurous stowaway smitten with the idea of seeing aliens the other crew won’t realize jumped on board with them until they’re halfway to the moon) even step aboard the spaceship, let alone take off, spend travel time (in conflict and/or in barely contained simmering sexual desire) to eventually reach the promised land, that barren satellite of good ol’ planet Earth (with the first human foot only landing down on it with a mere 30 minutes of screen time left).

While the pre-countdown-for-takeoff time is nowhere near unendurable, it can’t be said to fall into the ranks of Lang’s most cinematically rewarding either. While the narrative spends a lot of time on the overwrought and not particularly engaging melodramatic central story of the rich entrepreneur Helius suffering with heartbreak over losing his assistant Friede (Gerda Maurus, also the object of desire in Spies, as well as for Lang personally, as he was indulging in a secret affair with her during the making of both films) who he never found the courage to admit he was in love with (and who might feel an unrequited pang or two for him) to his other, higher-strung assistant Windegger (Gustav v. Wangenheim) – is there any doubt the three are headed to the moon together? — Lang still manages to find the time (something these silent German films seem to have a lot of) to wring some decent excitement — if few examples of the audacious camera work or bravura editing techniques we’re used to seeing from the master craftsman — out of the thriller suspense plot that emerges of the tall mercenary figure known as Turner (Fritz Rapp), hired by a circle of ruthless amoral businesspeople, as he cunningly steals all of Helius’ space plans out from under him. At one point, achieved with a simple yet cleverly executed frame cut, Turner reveals himself as adept at changing into a new guise as Mabuse – interesting to note that, other than this chameleon-like ability, Turner isn’t drawn up to be anywhere near the all-powerful megalomaniacal villain, yet in the novelization Harbou penned at the same time as the screenplay with Lang, she constructed Turner to be much more the ubiquitous Mabuse figure. 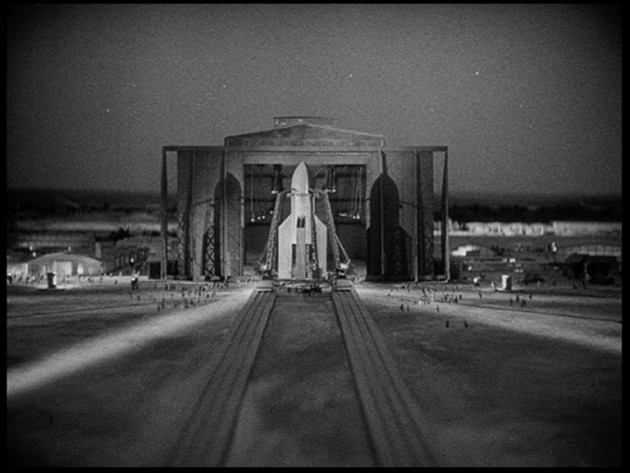 It’s during the take-off scenes (when we finally get there), just before and after, as the ship shoots through space, that the film really ‘takes off’ (get it?). With its long and lingering shots appraising the massive scale of the ship itself, first against the throngs of excited onlookers, then slowly moved into place and lowered into a huge water tank to lessen the propulsion kick-back (it’s interesting to note that the use of water beneath the launching rocket would become the common practice during America’s Cold War space race – watching the short, but informative 15 minute Kino doc on the making of the film, it was fascinating to discover how much research on the emerging speculative technology Lang and Harbou put into the film, nailing many things, such as the now familiar always-present launch ‘countdown’ and the disengaging of the fuel bays while ascending) and through take-off, Lang’s fetishistic approach is reminiscent of Stanley Kubrick’s extended opening space docking scene to the classical strains of a Johann Strauss waltz in 1968’s 2001: A Space Odyssey and the gloriously nostalgic-laden long reveal of the USS Enterprise in 1979’s Star Trek: The Motion Picture.

Yes, the primitive effects of Woman in the Moon no longer hold up as well as those other two films (gee, those onlookers look a lot like tiny unmoving toy figures), but the unbridled desire to astonish is there, to present something never seen before, that with a tad more suspension of disbelief, it still manages to create a genuine sense of magnificence. Okay, when they get to the moon, and Lang and Harbou’s speculation goes a bit off as far as a breathable environment is concerned (I only wish, since they’re so off the rails with that, they didn’t add in some menacing creatures or underground cave dweller creatures for them to fight off!), yet the sheer scale of those moon sets are impressive (and must have taken up staggeringly huge soundstage space).

Unfortunately, not surprisingly (and not uncommon to films like these films) amongst the vast and impressive moon sets (including cavernous underground caves with vats of bubbling springs), the traditional ‘human’ narratives, with Windegger growing more unhinged (opening that love triangle door wider and wider) and Turner revealing murderous impulses, starts to become really exposed as fairly flat. So much so that, by the end, with our heroine deciding who she really loves (you can guess just from reading this write-up), I kept looking past her to get to the far more interesting and engaging cool moon landscapes that so much effort was put into creating.