Willem Dafoe: A Master Class and an Interview

An extremely versatile actor, who can impersonate Jesus (The Last Temptation of Christ, 1988, Triumph of the Spirit, 1989) with the same ease he can become a vampire (Shadow of the Vampire, 2000) or a satirical version of Dick Cheney (American Dreamz, 2006), Willem Dafoe visited the 49th TIFF for the world premiere of The Dust of Time, the second part of Theo Angelopoulos’s trilogy, which started with The Weeping Meadow (2004) and covers the history of the 20th century. His presence forced many film students, journalists and fans to get out of bed very early in the morning to stand in line for almost two hours in order to secure a seat for the long-awaited master class of the theatre-trained actor, whose constant film presence never ceases to excite us. Dafoe compensated us for the wait with his quick wit, his humor, and his gentleness.

In between clips from The Last Temptation of Christ, Platoon, Wild at Heart, and The English Patient, Dafoe gave us a hilarious impersonation of Theo Angelopoulos at work, and didn’t even hesitate to talk about Madonna and the commercial failure of the notorious Body of Evidence (1993), besides answering all the questions from the audience and the journalist coordinating the discussion. Having played so many different parts in his career, Dafoe underlined that his preparation for a character is always different. Sometimes you do a lot of research; sometimes you find the key to it more easily.

On making movies: A great part of making movies is the adventure of them, a desire to disappear into a story.

On how he chooses scripts: I seek someone who’s dying to make something, someone not corrupted by studio politics.

On screenplays: The screenplay for me is a kind of blueprint. Once the shooting begins, it takes a life of its own. I’m much more attracted to situations and people not literature.

Later the same day, and after a press conference with Angelopoulos for The Dust of Time, I was sitting opposite Willem Dafoe, in the Excelsior Bar of his hotel along with a Greek journalist. Despite having only a few minutes with the actor due to an unforeseen delay in his schedule, Dafoe was unexpectedly calm, humorous, and personal. He really made an impression on me, with what may sound to some as pure professionalism, but to me it was more like a man who has a relaxed and philosophical attitude about life and is not afraid to share some of it with the public.

Offscreen: In Oliver Stone’s W, Dick Cheney is portrayed by Richard Dreyfuss. However, you also portrayed a different Dick Cheney in the highly underestimated, in my opinion, American Dreamz by Paul Weitz in 2006.

W.D.: Not really. I had no idea that if I shaved my hair I would look so much like him.

So was it the political message, the satire that made you say yes to the part?

W.D.: The political message is quite clear, quite easy. It’s not a complex movie. It’s sort of a playful movie. I think it does make that horrifying equation of politics having become mixed with celebrity. And that’s really what it’s all about and the fact that that the American Idol type show becomes more important than the President of the United States. It’s that simple. I think that some of the writing was really good and some of the performances were good. I liked the basic idea and also I wasn’t that attracted to it, but I felt liked doing a comedy and I liked how Paul Weitz approached me. He was very persistent and finally I said I’ll do only if I have some sort of physical mask because on paper it read like a suit role. And I said I’d like to be bald and I’d like to be fat. So, I put on a belly and we shaved my hair and put on the hair pieces and it was sort of by accident that I look so much like Cheney and then we decided to go to that direction.

Offscreen: How was it working with Theo Angelopoulos?

W.D.: He is his cinema and I’m really there just to help him. I like it like that. Sometimes, with someone that’s a very strong personality and has a very strong personal aesthetic, I like being around him. And he can’t do the things in front of the camera and be behind the camera at the same time, so I’ll do it for him. As he says, all the characters are facets of him. Also all the actors are agents of his desire. And I like it when I’m relieved of any personal issues. If I am free of myself, then I can be really personal, I can really apply myself in a way where I’m not blocked by self-consciousness, blocked by political correctness, blocked by what I think is right or wrong. It’s easier to go deeper.

Offscreen: How do you achieve that?

W.D.: How does anyone achieve that? You decide to submit to someone else’s will and take their perspective, their point of view. And as I say it’s really deeply an exercise of empathy. You say, okay, he thinks this, I’m going to take that on, wear it one me, it’s going to enter my body. It takes a lot of trust and I get hurt all the time.

Offscreen: So even though the film is complete you’re still not sure about the result?

W.D.: I never know, because I’m like a colour in a painting. How people react to it has so much to do with what else is happening in the world, what came before it, what conditions they respond to.

W.D.: I love this thing about the little story next to the big story. When I watch his movies I experience things in a profound way. People walking through mud, people in the most simple chaste embrace, people running for a train, things like that… boats coming to you very slowly. You experience those in a way that you take it on personally because you get in the context and you identify with how these people are dealing with the big history and how they’re influenced by it. And that’s exhilarating to me. It philosophically engages me in a kind of dialogue about how strange and beautiful life is. 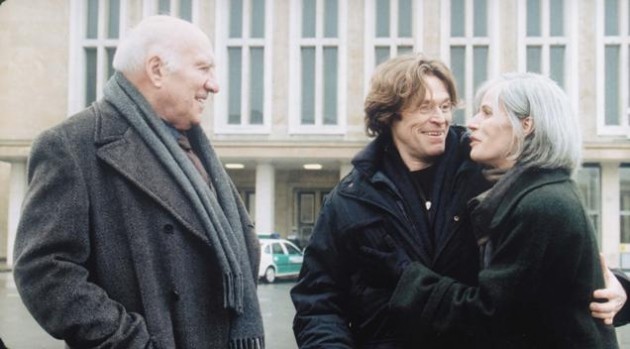 Offscreen: Angelopoulos’ work has to do a lot about time. How do you deal with time passing on a personal level?

W.D.: Me, I still think I’m twenty years old. So, a weird thing happened because I was working with the Wooster Group for many years and also basically with the same woman for many years. New York was my base. Now, I’m married to an Italian woman and now I move between Rome and New York. So, sometimes I won’t see friends for two or three years. And I see them again and I am 53 years old and some of my friends are a lot older since I was always the youngest in the group. And I go back and New York is full of ghosts for me. Many places in Europe are filled with ghosts for me. So, I’m always conscious. It’s like a mantra: How did we get so old? How did this happen? My other mantra is from nothing to nothing. Sometimes it makes me very sad, you feel things are lost, but then what you do have when you run into that person and you didn’t like them very much, and now they’re 65, they’re sick, they’ve had some tragedy in their life, you feel great tenderness for them because you feel lucky to survive. Like today, I’m sitting there [in the master class] watching pictures of me from the past. Not only do I see my face get older, but I also remember what was going on, what I was thinking, what I was interested in and now I see where I am now, and you do feel like a survivor in a dramatic way. You are constantly revisiting those artifacts and they are not just like home movies or old pictures, they’re objectified because they are public. So, sometimes, I feel like that if I ever wrote, I mean I’d better accomplish many more things before I feel arrogant enough to write a biography, but if I ever wrote one, the title would be something like A Very Public Death. Because you see yourself die over and over again with these characters. And quite literally in my case because I think I’ve died quite a bit.

Offscreen: It’s like Cocteau said: Cinema is death at work.

Offscreen: How do you feel about watching your performances?

With distance, maybe. Sometimes it can be better that you thought but most often the experience of doing something is far superior to that thing that’s made from the experience.

Offscreen: How have you changed since the time you started your career?

W.D.: I feel less conscious of career and money. I feel a little looser. I feel more reckless.