The water supply at a large zoo in an unknown northern European city (well, that’s what the credit says, deciding to entirely ignore that the zoo sign in the opening montage reveals it as Frankfurt) gets contaminated with PCP and the animals go vicious, busting out and causing all sorts of carnage.

Having been one of the very godfathers of that dubious, morbidly titillating (cuz you just couldn’t see that stuff back then! Now all you gotta do is head over to youtube to bare witness to any atrocity you want, be it cultural and otherwise) genre of sensationalistic shockumentary filmmaking of a bygone era that started with 1972’s Mondo Cane (and eventually opened the field to such infamously morbid yuchfests as the Faces of Death films), films which were rendered even more morally murky (and provocative) by the scandalous accusations against director Franco Prosperi and his filmmaking co-hort Guiltiero Jacopetti of having ‘directed’ some of the real-life human cruelties on display, director Prosperi’s filmic origins are certainly on display in Wild Beasts. Everything from the early startling shots of a fresh horse head being cracked apart and fed to lions, to the innumerable moments of animals willy-nilly thrown together to rip into each other (with sights such as a hyena working hard to rip off an understandably freaked-out pig’s ear, a tiger burrowing its fangs and claws into a protesting steer and a wide-eyed cat being overrun by rats) which I always inevitably find difficult to process (as I find myself swirling between visceral excitement at the footage and intellectual condemnation towards the deliberate cruelty, as well towards myself for watching – very odd, all that), to the luridly wince-inducing scenes of desperately fleeing rats being burned to death, Prosperi is certainly doing his best to live up to his nefarious reputation (as many times as actor John Aldrich assures us in his interview extra on the Severin Blu ray that all of the animals were separated before any of them got hurt — other than the burned to death rats, which there’s just no way he could deny that — I guess we’re supposed to take for granted that torn off ears and massively traumatic bite marks don’t constitute harm in the Italian film industry?).

Even with the film’s opening montage, which is mostly focused on establishing a quiet morning urban environment (along with, as we’ll come to understand, the vulnerability of the open city water system), Prosperi finds the moment to linger on used hypodermic needles lying in discarded piles of trash about the urban sprawl, perhaps in some socio-political attempt at linking accepted (or ignored) rampant drug use with the PCP in the water… but more likely he just couldn’t help himself from introducing a bit of sensationalistic Mondo-style visual poetry… which works, despite having nothing to do with the movie.

The scale of animal chaos in the film is much more impressive than I was expecting, especially from an Italian “nature gone amuck” film I’d never heard of before this release (kudos, as always, to Severin for finding another… well, gem, might be overdoing it… I’ll call it a worthwhile entry), with elephants rampaging across a runway tarmac (and causing a plane crash!), bulls and horses stampeding down a city block, smashing into storefronts (again, those poor animals) and a cheetah at full speed chasing a car along an urban roadway, culminating in a two-car smashup and some burnt bodies pulled from the wreckage (not real bodies, just make up effects! They didn’t actually kill people for this! Give Prosperi some credit!). 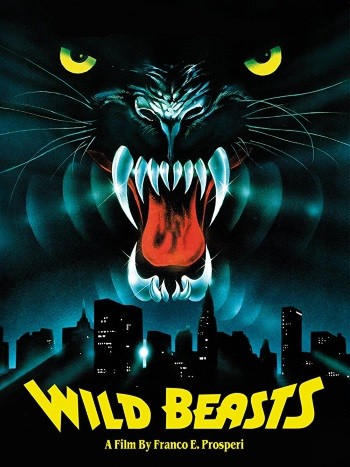 There is an impressive number of car crashes, as well as stunt work (that guy who crashes off his motorcycle headfirst into the car windshield – I mean… whoa… that’s some neck stiffness he’s gonna be suffering in the morning) and, while the gore might not rise to the level of, say, legendary makeup FX god Giannetto De Rosi on Lucio Fulci’s Italian gorefests, with most of the story shot in the dead of night to help limit what we see, there’s still enough spurting red stuff and open wounds from animal attacks to satisfy the aging, still defiant (though less excited about it all, perhaps) gorehound in me. The scenes with the animals clearly in the same frame running wild on the humans is impressive (though I guess when the safety of life and limb is secondary, you can get away with a lot!) and often well staged (though not always… there’s some wonky editing now and again, perhaps to cover up a lack of proper footage, the most glaring example being the initial attacks where who is yelling ‘Look out!’ to who is entirely confusing). A particularly inspired death scene is given to the blind artist, who gets attacked and eaten by his seeing-eye German Shepard (as if we didn’t see that coming) to the strains of a melancholic concerto playing on his mag tape player.

Of course, it’s an Italian exploitation effort, so – along with the animal cruelties and blatant misogyny (the moment the zoo keeper hero jokingly snickers “Before you go, you might want to freshen your makeup up a bit” to his zoologist girlfriend played by Lorraine de Selle is perhaps the crème de la crème from the side of the naughty fence) — all sorts of jaw-dropping perversities that practically no modern film would get away with abound. Within the first ten minutes or so, we are introduced to the rebellious daughter of the female lead zoologist (I think that’s what she is, it’s never really quite clear) played by Selle (a familiar face from some of the least social of a fairly nasty lot, including none other than Bruno Mattei’s gobsmackingly shameless Naziploitation sleazefest, Women’s Camp 119 – man, how I’d love to see a Severin interview with her recounting her work and thoughts on some of these! Though of course it’s possible one exists and I’ve just missed it) with a quick titillating peak at the youngster’s topless form, seemingly with nary a concern that the girl is perhaps ten years old (at most!) and we continue (and suspiciously) follow her through her dance class routines in her little tighties. While the subplot of the hostile girl expressing some serious abandonment issues towards her obliviously dense mother over the phone (using a very creepy frog hand puppet that emits some very unsettling sounds) initially seems unnecessary (just one of those throw-in touches of perversity that makes these Italian films so special), it turns out leading to a nicely disturbed twist ending with the dance class of kids not only menaced by a polar bear on the loose, but having some reactions of their own to drinking at their local water cooler (never mind that only the zoo water and this water cooler being affected with the PCP is a bit of a convenient mystery, but so be it… if it leads to this kinda added craziness? I’ll happily roll with it)!

There are all sorts of narrative strands that amusingly don’t add up. For instance, why would the local police inspector have a relationship with this zoo guy? Are animal attack cases rampant in Frankfurt – I mean, this unknown north European city? Why does the zoo guy have this entire scientific lab with a team of assistants working for him? And how does he get away with speaking with his girlfriend like that after she’s been attacked by a tiger, no less!

Wild Beasts provides another one of those astounding experiences looking back at a now almost magically unfettered time and place in filmmaking where morality seemed cast aside and no perversity or over-the-top excess seemed to go far enough, with perhaps the only consideration, unfortunately, usually being of white male privilege (but even those representatives are often ugly and nasty), with taste and audience identification rarely a concern (or just achieved). Is this good? Bad? I don’t know. I certainly find it more tolerable, exciting in its daring – and even far more honest — than whatever latest military complex approved, corporate status quo supporting, neo-liberal, weapons-fetishizing, slick consumer superhero fantasy presented as family entertainment exploding out its propagandist semen from your local multiplex. Now, those films are not only beneath contempt, but imbued with dangerous ideologies worthy of getting offended over.