White: Melody of the Curse

The Horrors of K-Pop

This year, the Fantasia Film Festival surfed the Korean wave and showcased several South Korean features. Among these were the animated King of Pigs, the feel-good film, Love Fiction, and the K-horrors, The Cat and the subject of this review, White: Melody of the Curse.

The Cat, the second K-Horror feature shown at the festival, is a strange yet oddly compelling film. As a cat lover, I was drawn to the narrative that featured our feline friends. The film explores a mystery involving spirits, mysterious deaths, cats, love, and more cats. The essential elements of K-Horror are found in the corpse-like ghost and the saturated colours but the film’s content is unique, connecting pets and ghosts in a surreal filmic experience. A must see for fans of cats and K-horror.

White: Melody of the Curse (2011) seems at first glance to be as silly and vapid as the all girl singing group who populate its mise-en-scène. But something more is being explored here, poked and prodded without shame, without hesitation. At its core, the film is a comment on the destructive nature of the Korean pop idol lifestyle. The film explores the elements that lurk in the darkest parts of the K-Pop idol culture: extreme competition, obsession with looks, ageism, severed friendships, and broken lives all for the center stage. White is a film that grew out of a need to explore an issue important to modern Korean culture.

Viewing the film at the Fantasia Film Festival was a fascinating experience as it garnered more laughs than it did screams. I wondered if the film would have held greater meaning for the audience if they possessed more specific knowledge on the cultural stakes of K-pop. Although the “Korean wave” (that brought genres like K-horror to North America), has familiarized audiences with certain aspects of that culture, it seemed as if the audience viewed the k-pop and idol culture as a hyperbolic farce, rather than a cutthroat (and more than slightly disturbing industry) that has engraved itself into Korean popular culture.

In the context of globalization, White is an example of how meanings change as they cross cultural borders. The laughter of the Fantasia audience was interesting because it came at moments that were clearly not intended to be amusing. At first I considered the possibility that this was a result of desensitization, but it runs deeper than that. The elements that make up K-Horror are well known to North American audiences who do not take these images seriously. One of these elements is the appearance of the ever-present vengeful female ghost, who an audience familiar with K-Horror knows will eventually jump onto the screen. The twisted limbs and grimacing features of this entity are so familiar that they fail to scare, and instead bring forth outbursts of mirth from the viewers. The ghost has become a punch line of a joke rather than a terrifying climax. The typical North American viewer does not have the same insight as a Korean audience, and thus fail to realize why the vengeful female ghost is used so often. The wonhon, or the vengeful female ghost, was birthed out the culture of consistent female repression in Korea. Haejoang Cho states that “the assessment of women’s status in any Confucian society is a highly complex issue, and perhaps nowhere more so than in Korea” which is generally described as “an extreme form of patriarchy, especially during the Yi dynasty” (187). Though the “lingering bad memories” embodied in these spirits can be described as han (a “deep resentment at injustice” (Lee 23)), the spirit’s intentions after “being separated from its body by death are manifested as hon” (Lee 23). Hon is the resentful element that becomes “an unfulfilled ghost wandering in this world, seeking revenge and a way to fulfill its worldly desires” (23). Hyangjin Lee goes on to describe the revenge of this spirit as a healing process and that, “in resolving han, the deceased (the hon) restores its lost ties with the living” (23). In K-Horror the wonhon is created as revenge against female repression. In terms of White, the vengeful spirit appears as a response to the treatment she received as a rising pop idol – she was murdered for a hit song she created called “White,” the film’s namesake. Though her appearance in the film is expected, what is important about her is that she encompasses revenge specifically against the k-pop industry.

K-Pop stars, or “idols,” are not simply talented people who happened to become famous by making music. They are created and molded by a complex system that raises young boys and girls according to specific standards that will turn them into pop stars. A recent article in the New Yorker, “Factory Girls: Cultural Technology and the Making of K-Pop,” outlines the almost factory-like system of creating potential K-pop idols; this unique system has been dubbed “cultural technology” by those in the business (88). The term “cultural technology” takes the humanity out of the pop stars. They instead become a product, a commodity. White takes this idea to the extreme, displaying the destructive nature that this can have on a person, showing lives destroyed from the inside. The term “idol” as a word for a musical star is not new to North American audiences. With the popularity of reality television shows like American Idol, the link between “idol” and “music star” is easily made. Where it becomes problematic is in the way that idols are created. K-Pop has not been as widely introduced into the Western market as K-Horror has, making its inner workings relatively unknown. Not only is the construction of K-pop groups different than Western music groups, but their means of achieving popularity is also different.

In Korea, there is a massive culture of television variety shows wherein pop groups can showcase their work. This is how many of them get their big break. White centers heavily on this as the girls are first seen singing in a television showcase. The group fails miserably – boring the typically giddy and jubilant teen hordes. These hopeful idols will be banished from the industry and doomed to obscurity unless they can come up with something spectacular for the next show. The final climax takes place on one of these showcases. In a culture where MTV is ruled by reality television rather than music videos, it is more difficult for a North American audience to relate to the Korean practice of musical showcases and variety shows. The film also exposes how k-pop idols are literally created (like cars on an assembly line) according to cultural standards that are deemed both socially acceptable and economically profitable. As a result much of the film’s criticism would not resound as strongly within the average North American viewer.

The entirety of the film focuses on the behind the scenes lifestyle of K-pop idols and calls attention to the fact that these girls’ lives are fully controlled by their agents. In the idol-making system “the groups are put together by the heads of agencies, according to an alchemy of individual and collective qualities” (“Factory Girls,” 91). This practice is clearly represented in White as the girls are clearly not friends who have decided to create a pop group. The agent carefully assembles the girls who will form the group and dictates where they live, when they practice, as well as what variety shows and other publicity events they will participate in.

White also delves heavily into how much of the industry revolves around beauty and age. In “Factory Girls,” the writer comments on the fact that “where K-pop stars excel is in sheer physical beauty” (91). The obsession with these superficialities in the film is palpable: the protagonist is sneered at by her fellow group for being so “old and experienced,” though she is obviously quite young. The fascination with beauty extends beyond age as it is made clear that at least one of the other girls has had plastic surgery. The character A-Rang is known for her beauty and it is the only thing that allows her to retain her status as an idol. Beauty is morphed into monstrosity when A-Rang becomes the target of the spirit’s wrath. Her plastic surgery begins to morph her face into something grotesque, her obsession with make-up becomes a death mask, and in the end, her beauty is her downfall.

A trend in contemporary South Korean horror is Sonyeo-Jueui or “girlism.” Jinhee Choi discusses the “cinema of girlhood” in relation to K-horror, citing female friendship as a driving force behind many of the narratives. Girlism has become a staple of K-Horror, drawing on female adolescent psychology with “neurosis, imperfections, vulnerability, and mystery” generating a mood that lends itself well to the genre (Horror to the Extreme, 43). White uses elements of girlism, as a way to detail the crumbling of friendship values in an environment fueled by competition. The message of girlism is that “what needs to be protected is not kinship, but friendship” (45); the girls in White are far from friends but their interactions suggest that the extreme pressure and desire to succeed inflicted on them by the idol lifestyle is what destroys any hope for friendship. The only true friendship in the film is between the protagonist Eun Ju and Sun Yee. Sun Yee is the only character that remains unscathed, having left the world of K-Pop behind. She is down-to-earth and not obsessed with beauty or becoming an idol, but rather creating music for art’s sake. This lone friendship erodes when Eun Ju fully gives in to the idol life—completely remaking her personality and disregarding her past. The inhuman process of idol construction in effect destroys the human act of friendship.

White may seem like another paint by the numbers entry into the already bloated K-Horror canon, but in fact it uses standard K-Horror tropes such as the wonhon and girlism to comment on the recent introduction of Idol culture. Unlike many other K-Horror films that have gained notoriety in North America (Such as The Tale of Two Sisters, 2003 and Whispering Corridors, 1998) White does not deal primarily with universal themes (such as high school friendships and family turmoil) that can more easily cross cultural boundaries. White deals with issues that are very specifically rooted in modern Korean culture. Whilst Western audiences enjoy the film, much of the social critique is lost in translation. 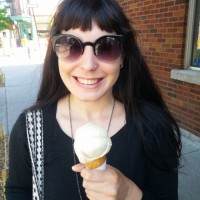 Teresa Lobos has a masters in Film Studies from Concordia University and is an avid consumer of horror and gothic cinema. She lives and writes in Montreal in a crumbling, haunted mansion filled with books and guarded by two demon cats. She also really likes ice cream.