A young actress (Kristy McNichol) wounds a beautiful white German Shepard with her car in the Hollywood Hills… only to discover to her horror this animal that she has quickly grown attached to is actually a ‘white dog’ – a dog trained to viciously attack black people on sight.

With so many of the trappings of a young adult afterschool special (it’s got wide eyed one-time teen TV star McNichol starring after all… and one of my viewing compadres commented that all was missing was a voiceover for the dog), yet with the intense and overt issues of race taken head on (with Paul Winfield’s proud African American dog re-programmer becoming an almost Christ-like figure, determined through isolated physical confrontation to re-train the ‘hate’ out of the black man’s white repressors – I mean, out of the ‘dog’, of course) and an unconventional shooting approach by Fuller (with constant zooms and the occasional eccentric camera angle) more reminiscent of a European art film (or, better yet, of a good 70’s Italian exploitation flick), with a wonderfully flavoured – and occasionally bombastic — score by Ennio Morricone, White Dog is certainly a unique film experience.

While it certainly doesn’t seem particularly far-fetched to imagine the idea of actual ‘white dogs’ trained by racist whites to turn vicious at the sight of blacks (that kinda thing metaphorically already exists in a million ways), were (or are) there actually dog re-trainers for this sort of thing? We’ve all seen enough 80’s films to know there actually were de-programmers hired by families to knock some sense back into their brain-addled runaway child who they just kidnapped back from some Hari Krishna style cult but… dog re-programmers? In general, no matter how beloved he is in the family, one vicious attack and Mister Mutt gets put down. Saying that, turns out all you needed was a smart go-for-broke filmmaker like Fuller, who was willing to not only blindly ignore the wonkiness of the set up (sadly, he might have just needed the gig) and managed to turn the mano-a-mano (or man-to-dog, whatever) central set up into a complexly realized investigation of the nature of learned racism.

The scenes of violence committed by the dog aren’t cinematically extreme, by any means, but there is clearly provocation in the image of a white dog savaging an innocent black man, only a little over a decade after similar televised images of trained dogs (with white cops holding their leashes) attacking black urban protestors. And the image of the dog, having escaped from the dog re-trainer, sniffing at some food while just around the corner a young unaware black boy steps out of a local grocery store, is not only effectively tense, but filled with resonance on the American black experience. It’s the kind of film that, of course, scared the shit out of the typically cowardly studio executives (with the only reason the film ever having been greenlit in the first place due to the fact — as the case with so many eventually great films — no one was paying attention during a period of major studio tumult and executive turnover and it just kept getting moved through) unable to discern or recognize the noble intentions of Fuller as they were too busy likely projecting their own ignorance in assessing the film… which is why, of course, the movie never really got any kind of release, as the studio was afraid of backlash.

The ideas in the film are admittedly a mixed bag, with it being a bit questionable that the white filmmaker (and writers) decided to make the predominant black perspective and ultimate salvation, literalized through the black Winfield character, be determinedly about forgiveness of those who attacked them. As much as there’s validity there, it can’t help but also feel a bit self-serving (sort of like my uninformed white neighbour saying he could get behind Martin Luther King Jr’s ‘non-violent’ approach rather than Malcolm X’s ‘by any means necessary’ – I mean, putting aside the fact that this is already an extremely reductive and overly-simplistic version of both of those men’s visions for racial justice – but, duh, of course you don’t approve the violent guy coming after you – it’s like the saying goes, ‘American White Man policy wholeheartedly approves of pointing guns at brown people around the world, but isn’t quite as fond when their black neighbor points one at them’). 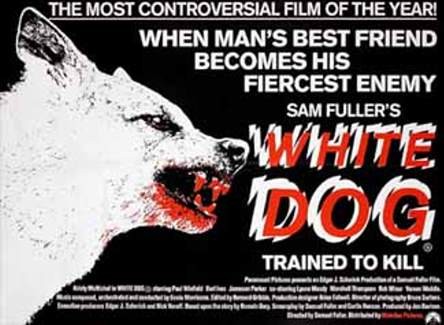 Though informing the Winfield character with this higher goal does also allow for fascinating internal conflict, with the dog ultimately breaking free and killing another person of color… so when they finally re-capture the dog, there is a greater emotional weight (and further move towards parable and away from reality) as the re-trainer, McNichol and the animal park owner (the mighty Burl Ives, who is so white he voiced Sam the Snowman in that wonderful 1964 animated favorite Rudolph the Red Nosed Reindeer) decide to go forward with their goal of re-training the dog.

The first half an hour of the film spends a bit too much time with the McNichol character struggling to get acting work (with Fuller oddly giving away the brief role of a cigar-chomping, silver haired director that was clearly written for him, to taken on a single shot of him as McNichol’s agent speaking with her over the phone) and sharing G-rated cuddles with her LA style boyfriend (Jameson Parker, soon to become a TV name for the long running series “Simon&Simon”), who is the first one to recognize that something is clearly wrong with the dog… but once she decides to take him to the Ives’ animal farm to discover Winfield’s animal trainer, things kick into gear.

While the film’s ending, with it’s tragic moment of violence, is telegraphed, and isn’t quite as effectively staged as it wants to be (as with a lot of the ‘animal attack moments’, while it’s pretty spectacular what they manage to get out of that dog, even with the help of Morricone’s enthusiastic score, it’s hard not to notice that the careful editing and caro syrup flung around is being used to disguise the fact that those animal teeth really aren’t doing much flesh-rending), at the same time, as with the entire film, while it’s exact perspective may not be clear, there some fascinating, often conflicting, ideas going on regarding the notion of learned racism and the possibility of overcoming its destructive nature. 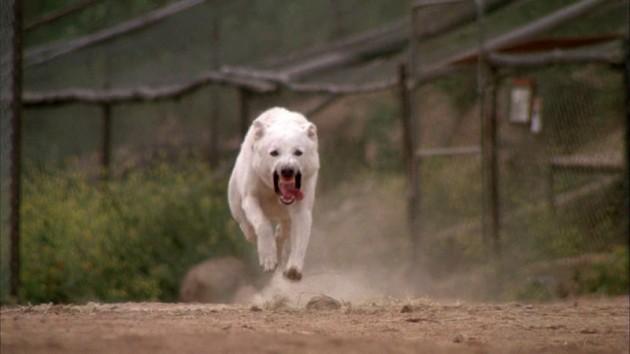 It’s not a perfect film, by any stretch, but it’s certainly an admirably wonky attempt. If Fuller had made White Dog in the 70’s, at a time when filmmakers were openly dealing with social upheaval right up there on the cinema screens, I’m quite sure it would be recognized as an important and interesting work. Unfortunately, it was made in 1982, against a Wall Street-financed tide, when Spielberg’s ET was king and Ronald (‘There’s a new morning in America’) Reagan was President – a time when issues of class inequality and a shrinking middle class began to be swept away, hidden behind a shiny corporate façade and the rising dominance of the big budget summer popcorn movies (something not lost on Fuller, having the Ives’ character at one point in the film use a cardboard replica of Star Wars’ R2D2 as a dart board – and I approve). The shrinking number of individualistic films that dared riff on the darker and more soul-searching explorations common to the previous decade, like say John Carpenter’s nihilistic, existential monster movie The Thing, or Fuller’s fascinating oddball fable on racial tensions in America? Well, they didn’t stand a chance.