‘Do you have to dig a hole like the old Anderson shelters in the war?’
‘Oh no, dear, that’s all old fashioned. With modern scientific methods you just use doors, with cushions and books on top.’
‘Where on Earth are we going to get doors from, James.’
‘Well… you just unscrew them, dear.’
‘You don’t mean off our own house?’
‘Well… uh… yes, dearest – ‘
‘You’re not going to ruin the paintwork, James.’
‘Oh, don’t worry. I can soon touch it up after the bomb’s gone off.’
‘Well, mind you do.’

The elderly couple Hilda and Jim prepare for a nuclear attack on their English countryside home, manage to survive the blast, find themselves entirely isolated with no water or electricity and then deal with the inevitable deadly effects of radiation fall-out. 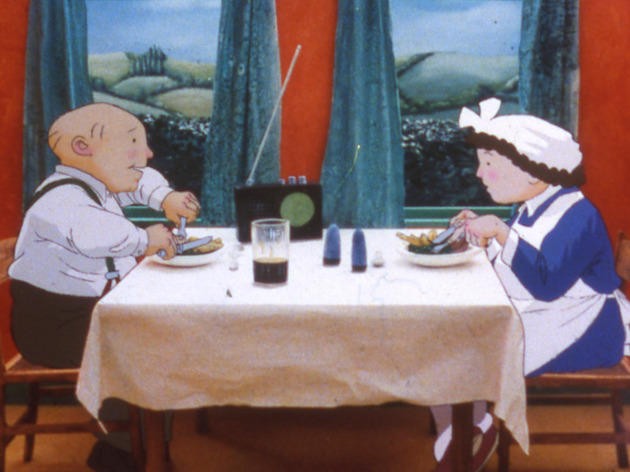 Yep, it’s as grim as it sounds, made even more challenging (and ultimately harrowing) by the fact that it’s presented in what we associate with the family friendly format of animation. Now I’m far from particularly knowledgeable about the history of animation and the qualities of all of its many forms, but from a layman’s perspective, When the Wind Blows, adapted from a comic book of the same name, plays out as a particularly effective (especially against the simple narrative it encompasses) merging of stop-motion (the cottage, the outdoors) with a traditional hand-drawn animation (the doddering retired couple with their little quirks such as the beady spots for eyes) that would be positively charming if it wasn’t in a story so dire, filled with warnings and glimpses of potential realities so terrifying to imagine.

With the doddering retired duo initially somewhat amusing in their complete reliance on the news coming through their radio for most of the perceived truth in their lives, as a committed Jim determinedly follows the exact dictates of the government-issued pamphlet on how to survive a nuclear blast (the absurd and terrifying reality being these were legitimate booklets passed out to obviously not only to comfort the eager-to-conform masses that they can survive a nuclear war – they can’t — but to keep them in a constant state of fear and under control), turning more grotesque as the couple’s assuredness grows to staggeringly delusional levels as they remain convinced that emergency governmental forces will arrive soon enough to make everything better even as the two squirm through the final slow and grotesque inevitable death throes that come with the radiation sickness, When the Wind Blows reveals itself, as did the live-action horrifying Threads also from England two years before, as having more on its mind than just a vision of the horrors of a nuclear holocaust (not that they both don’t do that unforgettably well too – Threads with its larger more ambitious narrative canvas and Wind Blows with its intimate setting). 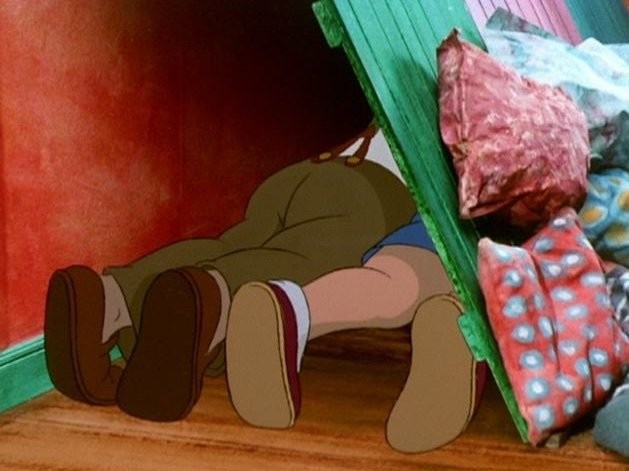 Where Threads surmises and powerfully presents how, along with the massive loss of life and destruction, every level of institutional structure (the ‘threads’ keeping society functioning) would entirely break down under a nuclear attack, When the Wind Blows relies on the cartoon couple of Jim and Hilda as a microcosm of the masses, of the people, who have turned over entire self-reliance to a mass media controlled by forces they don’t understand, providing endless useless misinformation (such as how to survive a nuclear Armageddon by having enough food and milk for two weeks) and ultimately leading to world-wide catastrophe; like the sheep-like followers that the ruthless opportunistic elite always rely on, this helpless, hapless, ultimately good-intending people remain unshakeable in their belief of the State (as they have been so propagandized and socialized from birth – revealed by their misty romanticized musings of their childhood memories of the end of the Second World War as they dodder about preparing obliviously for the nuclear attack to come — they have no other internal foundation from which to draw); too weak to move, shaking and vomiting, hair falling out, entirely ignored and forgotten, Jim chillingly still tries to comfort this dying wife with the myth that emergency help is certainly on the way.

I mean, if When the Wind Blows isn’t a call to wake the hell up and to break out of the wilful commitment to the lies that the mainstream narratives are delivering, I don’t know what is. The other choice is it’s saying we’re done for regardless. 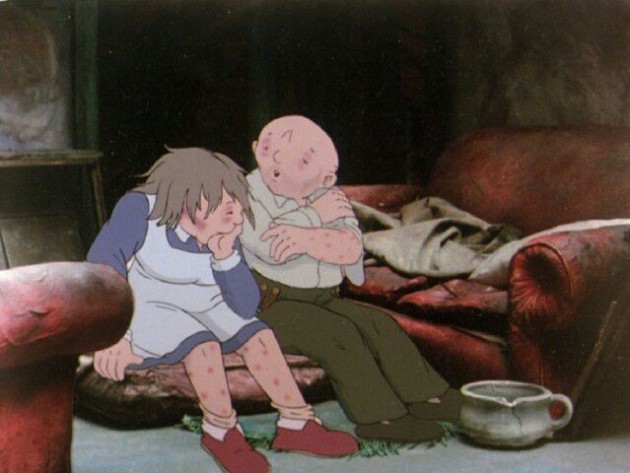 When the Wind Blows comes with a typically powerfully rousing score, with politically-trenchant lyrics (most that aren’t in the film, but are on the amazing soundtrack album that I used to listen incessantly to back in college when it came out, long before I had the chance to see the film) from Roger Waters, delivering numbers up there with the best of his material post-Pink Floyd (peppered with the powerfully emotional instrumental solo work of the accompanying musicians that has defined a lot of Water’s work), as well as the opening excellent rockin’ titular tune by David Bowie and some good work thrown in by familiar 80’s groups like Genesis.

The duo programming the monthly ‘M: Les Maudits’ series at Cinéma Moderne actually had the deeply admirable kahunas to screen this as a double feature with the aforementioned Threads, on a night which was guaranteed to traumatize an unsuspecting audience (I’m not seeing that Moderne audience are the most genre-savvy and – for better or worse – the graphic grim natures of these films has put it in the camp of genre). These are life-changing experiences on their own, deeply profound and relevant works. I managed to catch Threads (and witnessed first-hand the stunned reactions), but couldn’t stay for When the Wind Blows, so decided to track it down at home. Re-watching it thirty years later, it’s only grown more important, relevant and terrifying.