A coupla seriously bad dudes, ex-Confederate soldier Ben Trane (Gary Cooper), haunted by the ravages to his home and way of life that the Union forces have wrought on him, and sociopathic gunslinger Joe Erin (Burt Lancaster), hook up (for the time being, as an eventual showdown between the two is clearly in the cards) south of the border and, along with Joe’s gang of merry cutthroats, take advantage of the on-going Franco-Mexican War as opportunistic mercenaries selling their violent services to the highest bidders. 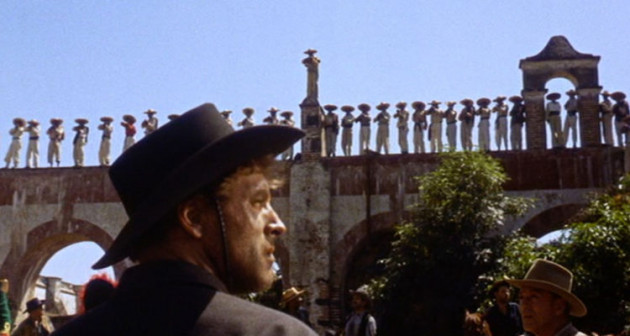 Immoral characters. Back-stabbing harlots. A massive Mexican stand-off (with a bazooka-size machine gun – the type familiar to anyone who’s watched the more insanely violent westerns, Spaghetti and otherwise, from the mid-60’s into the 70’s – you know the one — designed for max carnage and optimum body count – brought out triumphantly at some point). An environment of cruelty – why, hell, there’s a scene were Lancaster’s Joe is literally about to order the killing of an entire Mexican town’s worth of children — by colorfully rough-and-tumble henchman Ernest Borgnine and none other than Charles Buchinsky (and if you’re a real movie fan, you know exactly who that is, just prior to his name change) – if he doesn’t get what he wants (and while he does get his way, it’s clear they woulda killed the lot of them). Mix in the quick cutting (the only thing missing is slow motion), and Vera Cruz has early Sam Peckinpah written all over it (specifically The Wild Bunch, which unsurprisingly also graced us with that most indelible of character actors, Borgnine, whose blustery persona and gap-toothed Cheshire Cat grin reveals yet again just how mercurial the movie camera is in choosing who it loves, cuz it certainly loved that guy out of nowhere).

I guess it shouldn’t come as a complete surprise that it would be a tough, no-nonsense director like Robert Aldrich to pave the way (and not just to Peckinpah, but to the grimier, more lurid pleasures of the entire Spaghetti Western genre, with even a few more of Joe’s henchmen – i.e., the bug-eyed Jack Elam and ol’ hardened grim-face Buchinsky himself appearing in arguably the greatest Spaghetti of all, Sergio Leone’s Once Upon a Time in the West), a filmmaker with a predilection towards ahead of his time violence – I mean, hard to imagine how audiences handled watching – or more aptly put, listening – to the harrowing shrieks of Cloris Leachman’s doomed hitchhiker being tortured to death while the beaten up and barely conscious Ralph Meeker’s Mike Hammer lies helpless to intercede at the beginning of Aldrich’s next film, Kiss Me Deadly).

Audiences of the day likely felt too waylaid by the impressive level of violence (certainly for a mid-50’s film) to notice there’s something a bit too soft about our two main players. While it might have always been a part of his persona and style, Cooper is too laid back in the part of the supposedly guilt-ridden Trane. The emotion he reveals after his final shoot-out with Joe, which is supposed to signify a kind of final justice for him, doesn’t ring with the power it should. And Lancaster relies too easily and too often on his wide smile to indicate his sociopathology. 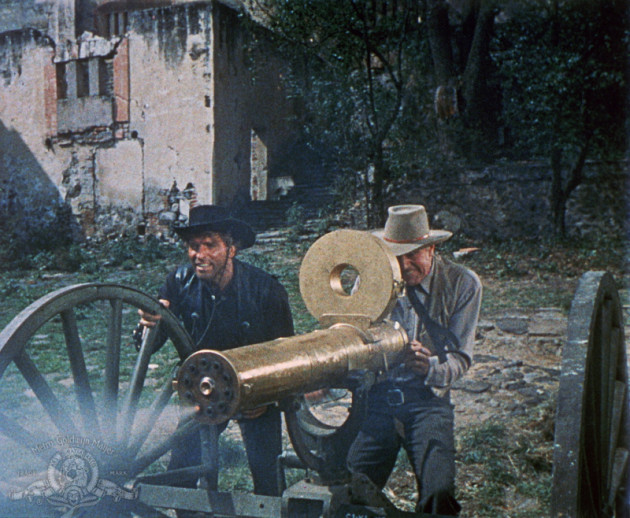 Still, I really like the idea of Trane finding a ‘cause’ through his growing simpatico understanding of his own recent painfully losing struggle as a fighter for the South with the working poor Mexicans, as he watches these sweaty brown folk courageously fighting off the haughty and culturally-invading white French forces, uncowed by the fact their enemy is superior in arms and wealth. Going back and looking at these post-Civil War Hollywood Westerns (including The Outlaw Josey Wales, which I just watched and I’ll be scribbling up my thoughts on next), it’s fascinating to be reminded of how many favored the plight of the characters (and Old West principles) of the defeated South, over those of the smug Union, the winners, revealed as often unremittingly cruel and monstrous. Good stuff.