For those living under a rock and unfamiliar with the original series, it starts out following über-optimistic FBI Special Agent Dale Cooper (man does he love the smell of those Douglas firs… and nothing like that Twin Peaks coffee… heaven) as he settles into the fictional rural logging town of Twin Peaks, Washington to investigate, with the help of local Sherriff Harry S. Truman (Michael Ontkean), the brutal torture and murder of homecoming queen Laura Palmer (Sheryl Lee), leading to the uncovering of all sorts of diabolical underlying threats and secrets.

No matter how many trusted film friends explained how it wasn’t necessary to revisit the original series before delving into the much anticipated 2017 18-episode comeback 26 years later, that’s just not how I roll. Along with the numerous revisits into Lynch’s uniquely surreal, absurdist, hilarious and unsettlingly terrifying dream-state explorations I’ve been fortunate to embark on recently (with the new Twin Peaks hype having upped his already considerable presence in big screen 35mm rep houses just that much more), each time back, that well water just seems that much more satisfying.

From the journeys of wide-eyed innocents having their naïve souls tainted, if not entirely obliterated (the final shot of the last episode of the original series — while nowhere near close to Lynch’s most powerfully executed – must be up there with the most nihilistic visions of pure evil triumphing over the ultimate figure of hope and human positivity that he’s ever managed to conjure up out of that great Jungian shared-unconscious-pool from which he seems to draw), to the dreamy fugue-state characters (including a very languidly-moving silent giant and a red suited dwarf who speaks in a VERY odd way – I mean… where does Lynch cinematically get these technical inspirations from – and why do they almost always seem to work?) providing enigmatic clues that may not always be related to the direct narrative, but yet somehow seem to make sense in a larger realm just outside of our immediate comprehension, the absurdly funny interplay amongst the characters (with all the wonderful character tangents thrown in), the genuinely harrowing and disturbing moments (Laura Palmer screaming in demonic rage over a strobe effect in that very final episode is one of a number of moments where I wondered how he was able to get away with the much less adventuresome and more consumer safe environment of television at the time), the genuinely romantic moments that should come off as corny because of how earnest they are, yet somehow play (helped along, as in most of Lynch’s other works, by that brilliantly lush and memorable Angelo Badalementi score) as deeply beautiful human longings for connection (with more than a dash of absurdity and irony that somehow never seems to undermine that earnestness) and that ever-present much appreciated erotic sensuality that Lynch’s films seethe in, and drip with, it’s as if the entirety of his output is really the continuation of a single film; a continued channeling from a dark, deeply hidden pre-rational (shared) place, where codes for understanding haven’t yet been established, that only he seems to have found access to and able to then present it there on the screen in ways that almost always feel unselfconscious and organic (which is amazing when considering how easily this type of repetitive surreal imagery and absurdist conceits could slip into parody or pretention). The closest I’ve seen him come to a kind of failure of perhaps trying too hard is with this series’ follow up prequel film Fire Walk With Me (1992), which was misguided in its very conceit (telling us a story we already know) with the added baggage of having to throw in cameos of characters from the television show I guess to reward those faithful viewers from the original series… and yet, even then, that film still overflowed with powerful imagery and remained immensely watchable. I’m sure a substantial number of Lynch fans even argue it as his masterpiece.

Whether it’s his explorations into transcendental meditation that has allowed him to keep that portal of creativity (or whatever it is) open, his muse has remained more fascinating, enduring and consistently powerful then just about every one of his contemporaries. And, perhaps what speaks to me the most is, with few exception, the worlds come wrapped in a favored cinematic genre; the neo-noir (well, other than a few, such as his work for hire, The Elephant Man, and his more quietly intimate and poignant The Straight Story, with both of these special films revealing that, above and beyond being a unique presenter of the deeply unsettling and hysterically absurd, Lynch also understands how to cinematically craft more conventionally narrative stories as well). 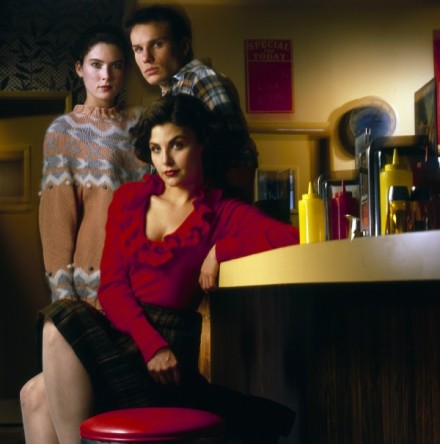 Twin Peaks does suffer the same flaws as so many television ‘dramas’ of that time, with its limitations in scope and budget. There’s a bit too much of a reliance on medium wide shots and standard master-to-close up presentations (though when it is time to reinforce particular moments, that camera work does grow more complex and evocative), an often easy flat lighting scheme (again, though, certain scenes are clearly hand-picked to present much wilder lighting and effective color schemes) and there is the occasionally awkwardly staged ‘action’ scene where they likely decided that, in a world of time pressures, these weren’t the moments to spend much time on (the beyond terrible attempted comedic scene of suddenly super-strong Nadine pinning high school jock Mike springs immediately to mind). I also don’t find much purpose to the opening Log Lady introductions before each episode, with those opening monologues mostly coming across as obvious and pedantic, rather than anything enigmatic and intriguing.

The Log Lady herself fits right in with the plethora of colorful characters and performances, starting with Kyle MacLachlan’s Agent Cooper, who has little problem shedding his big city trappings and adoring the simple pleasures of the small town. And it’s by far Lara Flynn Boyle, Sherilyn Fenn and Madchen Amick’s finest hours. Even if I don’t find it exactly clear why (or why Lynch thought it necessary) for Boyle’s Donna character to seemingly morph into a kind of cigarette smoking noir femme fatale at a certain point, yet even then, it’s hard to take your eyes off of her. I barely remember much of anything else that either she, or Fenn or Amick, did beyond this show, but here they’re all great. As usual, Lynch manages to present his female characters as not only sensual delights, but as menacingly mysterious and proactively empowered. At the same time — and perhaps a bit murkier – they are often manipulative and dangerous. They become the battleground for men’s violence (as the tortured and murdered body of Laura Palmer hangs over the entire show) with things like the shockingly brutal scene of Maddie being beaten to death by Laura’s killer (again, amazing they got away with it on tv), and it isn’t clear (true to the noir convention) if the women’s manipulations are a result of learning to survive in this brutal male dominated world, or some inherent part of being female.

Ray Wise is pretty uniformly good in everything I’ve seen of his, but as Leland Palmer he has a few scenes in his culminating middle-of-season-2 episodes that are just mind-blowingly good. His character is filled with pathos, and anguish, yet with the performance still always retaining that underlying sense of absurdity, as he deals with the death of his daughter and the fact that her murder has led to secrets he has hidden bubbling out and exploding. And Bob is a terrifying embodiment of evil. Miguel Ferrer is so enjoyable as the arrogant and brilliant FBI agent who occasionally reveals a beating heart beneath the blustery and rude exterior.

The show does lose a bit of momentum after the brilliant resolution of Laura’s murder during Season 2, floundering a bit with seemingly arbitrary subplot like Cooper being suspended from the FBI, the town’s corrupt business shenanigans growing increasingly complicated to the point of being convoluted and the Major character (who overall is still a pretty wonderful character in the mix) being kidnapped in the woods. Some unfunny broad comic bits show up here and there as well, and there is that odd and not particularly inspired subplot of the distraught character James, already a pretty vanilla character (which works fine as a color in the ensemble), running away to end up in a doomed romantic triangle with a standard femme fatale (straight out of the Postman Always Rings Twice) trying to manipulate him into killing her rich, awful husband. Yet, by the end, with that last profoundly hallucinatory episode in which the restored FBI agent Cooper finds his way into the enigmatic lair of darkness known as the Black Lodge, it all comes to a beautiful, terrifying and nihilistic ending.

I’m sure every Lynch fan is already aware of this, but it came as a nice little surprise to me when the apparition of Laura Palmer shows up in the final episode and, in that brilliant dream-speech style (that I believe was achieved by recording the actors walking and talking backwards then played in reverse to make it seem forward… or something like that), tells Officer Cooper that she’ll see him in 25 years. Okay, turned out he was off a year (it’s 26) but the fact that he pulled it off at all against the fickle and unpredictable nature of the television landscape, is pretty surreal in itself.