The FBI investigates the torture and murder of 17-year old drifter and drug addict Theresa Banks, followed by the last week of the tortured life of Laura Palmer.

I’ve seen Fire Walk With Me at least 3-4 times and, revisiting it again, I came away with my original take confirmed – it’s an odd experience, filled with Lynchian moments and powerful imagery and, yet, one that’s ultimately flawed. I can understand (if not agree) with why it was originally met with anger and dismissal at its Cannes premiere, while at the same time, am not surprised at how the estimation of the film has grown over the years. While it’s not the masterpiece that some want to claim it as (I suspect that’s more the case of Lynch fans looking to stand apart and claim ownership of ‘understanding’ Lynch’s vision by picking a slightly less-beloved one of his works to champion), it still has a lot of the surrealism and absurdity, the cleverness, the oddness and the overriding terror (including those deeply unsettling looks through corridors and gaping pitch dark holes of meaninglessness, both figuratively and literally). On the surface, the overall unique Lynch qualities are there – but yet, it doesn’t retain the same resonance, or have that sublime feeling of Lynch operating in his usual unselfconscious and organic way, that we’ve come to expect from the filmmaker.

I go back and forth on the performance of Sheryl Lee as high school senior Laura Palmer, spiralling down into a world of drugs and aimless sex with strangers as a way of coping with the trauma of being a continued victim of incest. There are times in the film she strikes a perfect note. The scene where she not only keeps drunkenly giggling at the terrible sight of her boyfriend drug dealer Bobby having killed someone by blowing his brains out, but also taunts him, cruelly trying to convince the freaked out boy that it’s actually his closest friend Mike that he’s killed, is a moment that suddenly powerfully speaks to something real; how a threshold of pain and trauma can be reached, in which humanity shuts off and a monster is created. In many ways, this moment speaks as much to Lynch’s absurdist view of a terrifying and unknowable world as any he’s created (ironically, in that there isn’t any enigmatic imagery attached with it – it’s practically played ‘straight’), which also might speak to his directing in this scene simply elevating the performances. Because, overall, Fenn doesn’t have the chops to really own the part. She worked great as the image of the dead Laura Palmer that hangs over the first two seasons and she performs nicely on the show as her returned cousin, the nebbish Maddie, perhaps because it didn’t really require as much emotional depth, but as Laura here her performance is almost all mania and over-expressed terror (dare I say… hysteria? Yes, that’s right… as in, ‘exaggerated or uncontrollable emotion or excitement’. I said it.). 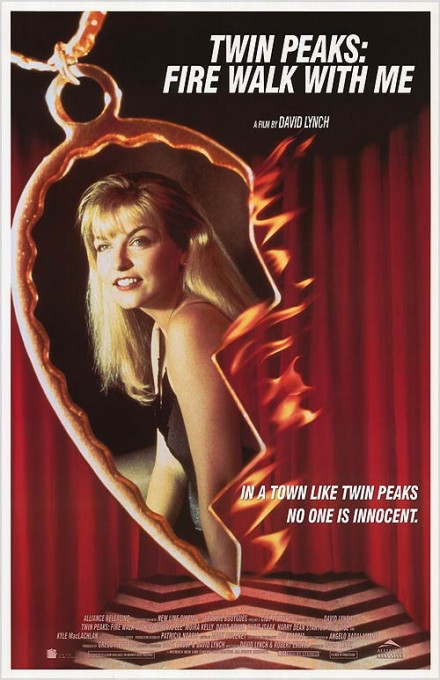 We already know the story of Laura Palmer. Her past and her murder, including the events leading up to it, were solved halfway through Season 2. And the uncertainty and ambiguity (the ‘unknowability’) of certain details is part of the power of her story. Having it all presented here, as effectively and Lynchian as it is, kills the resonance of that enigmatic unknown. It may be a powerful idea, for instance, to have Laura, in sheer terror, finally see the subconscious demon of pure evil Killer Bob turn into the actual person molesting her as she is raped in her bedroom, but… as viewers, we already know. The show told us who her rapist/killer was. There is no reveal here for us. And without narrative or dramatic impetus, it’s a bit off-putting at being presented with, beyond that special unique imagery and perspective, nothing more than a view at the suffering, humiliation and trauma that we already understood Laura went through. In fact, if Lynch didn’t include a happy ending that presents the tortured girl as having found spiritual peace in death, the unpleasantness of this might have been even more apparent.

The first 30 minutes or so, with two typically odd FBI agents we haven’t met in the show before investigating the murder of Theresa Banks, has all the admirable Lynch character quirks and oddness (including the fun and amusing moment of Lynch’s returning Bureau Chief Gordon Cole presenting “his mother’s sister’s girl” Lil to dance before the agents as a way to reveal clues – I mean… why doesn’t Cole just TELL them the information?) and it’s clever and entertaining (and nice to see the now late Harry Dean Stanton as a trailer park manager – man, some how I thought that guy would live forever). And yet… because we’ve already been down these Twin Peaks roads before, it somehow also feels lesser realized. It’s like watching a talented filmmaker who can mimic a David Lynch film, but can’t quite muster up the odd resonance, or that feeling of a sharing of some deeper subconscious space, that only Lynch does at his best (which he’s often at). It feels like a simulacrum of Lynch’s vision; the imagery is all there, but not quite the experience.

Even the imagery itself, some of it, like the children wearing the phallic nosed white masks, feels like Lynch feeling a need to present new visual clues for the film… and, yet, if the imagery here is so pertinent to the events that follow during the show, why does it disappear? It’s certainly nice to see Agents Cooper and Albert again and the moment of Cooper seeing himself in the live video feed just as a long missing agent played by David Bowie arrives is wonderfully inspired; yet the inclusion of these two agents, as with a number of the other characters, is too brief and inconsequential to feel like much more than throw-ins to satisfy the Twin Peaks crowd, rather than having any real inherent reason to being in the film.

And I simply don’t believe the arrogant high school drug dealing bad boy Bobby Briggs at the beginning of the television series as having murdered anyone, no matter what pre-history this film is trying to create.