Renton (the dynamic, exploding onto the scene Ewan McGregor, before he fatally slipped up with those silly, facile “Star Nuts: The Spooge of the Gibbles” movies, or whatever they’re called) struggles to get off the horse and go legit, only to keep finding himself drawn back into the low-grade criminal world of his fellow Edinburgh junkies, chief among them the charismatic bleached blonde hustler Sick Boy (Johny Lee Miller) and the sickly looking conman Spud (Ewen Bremner), as well as the brutal bar violence of their alcoholic psychopath buddie Begbie (Robert Carlyle). 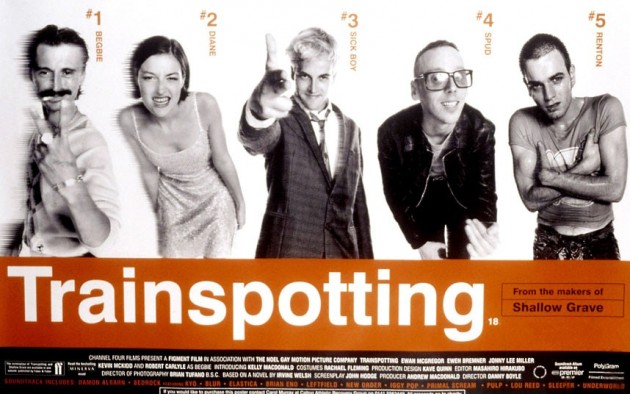 Coming as it did after the late 60’s hipster druggy meditations against the picturesque island vistas of Ibiza that was Barbet Schroeder feature-film debut More and the harrowing unrelentingly grim look at teenage heroin addiction in West Berlin of Uli Edel’s Christiane F., the next entry in the exciting (mostly 35mm projected) ‘Toxicos’ program, with its irreverent blackly humorous tone, wildly adventuresome and fantastic shooting style (mirroring the maniacally highs and lows of the addiction), wonderfully engaging ensemble of character actors (with Carlyle’s chain-smoking, as ready to initiate a vicious brawl as he is to smoke another fag, egomaniacal and exceedingly hair-trigger dangerous footballer leading the charge), and kick-ass soundtrack featuring some rocking English bands, Iggy Pop and Lou Reed, made Trainspotting a sudden and welcome shot of adrenaline.

While I wouldn’t call the film a glorification of heroin use by any means (the ugly squalor with which the addicts wallow in in their shared dwelling in order to score that next hit, and scenes, for instance, of the group groggily waking from their nods to the screeching wails of the junkie mom who has realized her months old neglected baby has been dead for hours attest to that), Boyle still relishes, with an admirably engaging rebellious streak, in a sense of the crazed adventures that swirl out of the absurdist tightrope life of the full-blown addict living on the fringes – sleeping with high school girls, running from the law, getting involved in deals involving stolen drugs – and, of course, the pure ecstasy – the one that allows all the painful realities of life to fall far, far away — of the high itself. 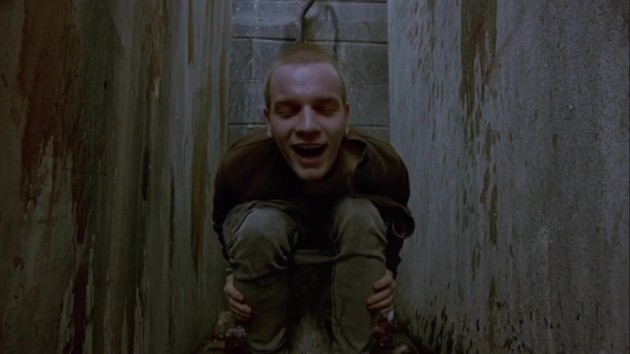 There is a slew of outright hilarious, gross-out scatological humor (related to the exploding diarrhoea that apparently is a symptom of withdrawal) that includes Spud mistakenly showering his girlfriend and her parents with his wet feces after mom tries pulling the offending bedclothes from his hands without quite understanding what it is that has sullied those sheets.

As I said, while the film acts as a highly stimulating and irreverent romp, Boyle isn’t afraid of a grim view of the squalor by which these junkies live (and to which, one by one, they begin to succumb, through either the madness or death that heroin itself brings, or related illnesses such as AIDS). There’s a gripping moment where the disgusted Renton, feeling downtrodden and physically abused, delivers an angry speech to his mates about the sorry self-loathing that underlines the identity of Scotland. I can’t say I know much about how this speaks to any legitimate perspective on the country, or just that of the junkies in its midst, but it’s well played, and certainly intriguing. 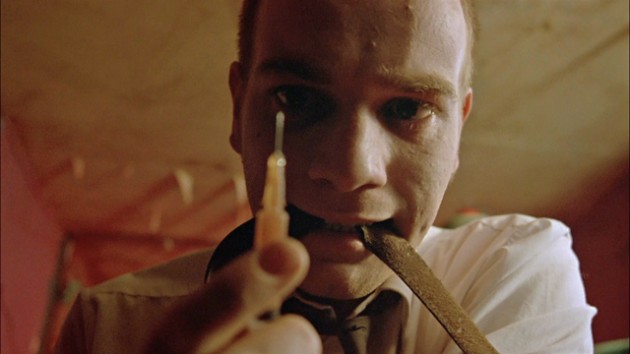 The grand finale apes the most Hollywood style of a happy ending, yet mischievously undermines it with our main character’s betrayal of his friends, as well as leaving us wondering (as he rat-a-tat delivers in monologue the wonderfully superficial life achievements that represent middle class success in a capitalist world) about the obvious – that being, a barely-clean long-time ex-junkie on the run with tons of stolen cash in his pocket? Well, it may look like a success because he got away… but that is not gonna end well is it (as that maniacal grin on his face pretty much tells us).

What a surprise to find this CQ screening of Trainspotting – as did the Christiane F. one before it — managed a rarity for this small hundred something rep cinema in Montreal; it sold out. Even More, while not completely full, was packed more than usual, with lots of young, attentive audience members… proving that filmgoers today are more than up for the vicarious thrills (grim or glorious) that these druggie films provide, especially the good ones… and this ‘Toxicos’ program, while short, is certainly showing those.