-Tommy Chong to Donna (Evelyn Guerrero), Cheech’s recurring high spirited Chicano fling from the previous two films, who our addled comedy duo stumble across in the desert smuggling Mexicans over the border

For this fourth Cheech (Richard “Cheech” Marin) and (Tommy) Chong entry (the films were coming fast and furious, once a year, by this point), the duo return to play their usually charmingly (well, that is, when they’re not stretching a gag too far) dim-witted and ever high (though, in this one, it’s almost entirely Chong, who spends almost the entire second half of the film tripping on a large quantity of mushrooms leading to some laugh out loud delivered moments of him freaking out in a restaurant) out of work musicians who, having been fired from their car wash job (after leaving the top down on a local pimp’s convertible and taking the full wet ride through the sudsy shower), agree to drive a limo from Chicago to Las Vegas for two royal blooded Middle Eastern businessmen brothers, having no idea they’re carrying over a million dollars of laundered money. 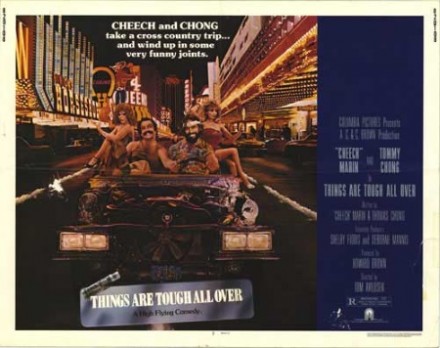 Okay, yes, C&C’s dual roles as the two arguing Arabs (with an impressively hard-to-recognize, putty-nosed Chong as the hair-trigger tempered brother and Cheech wearing a hilarious set of ridiculous hair implants on his bald head that he is too vain to recognize how bad it actually looks) might be a tad culturally tone-deaf — okay, not might be, it is… entirely (“She’s so ugly, she looks like my last wife. Even worse, like my goat.” “Stupid, your last wife was your goat.” “Oh, yes. You are right.” – they would never get away this today – and I’m not saying without good reason), but watching them play the parts with such high spirited and unencumbered gusto, I found it hard not to be won over (from Cheech’s beady-eyed greedy faces of triumph to Chong’s attacking of the car to kill it for angering him).

Chong relinquished the directing duties on this one to Avildsen, bumping him up from editing duties on the previous two efforts, and while I can’t say I noticed much difference in the directing (Chong helmed the first two sequels), the cinematography certainly manages (surprisingly, as you don’t think of it as particularly important in a C&C film) to evocatively capture the sense of the movie as a road picture (C&C’s first), from the vastness and dustiness of the desert, to the tough wintry streets of Chicago and on to the strange neon oddity that is Las Vegas. The duo also generously continue with their habit of including other comedians along for the ride to show off their wares (as they did with Paul Reubens, aka, Pee Wee Herman in the last two), this time with it being the burlesque-style, self-deprecating TV comedian (who only could have come from the 70’s) Rip Taylor, playing himself, who picks up the hitchhiking C&C in the desert and regales the horrified duo for hours with his endless sometimes clever, but always groan-inducing, one-liners.

There’s way too much easy scatological humor (with some of it going on a really long time) and where Cheech, even at his silliest and broadest (and most sexist), always manages to retain a certain innocent charm, Chong, on the other hand, can start to lean a bit too close to coming across as… well, brain damaged, Things Are Tough All Over still ended up being an unexpected upturn in fun and hijinks after the diminishing returns of the previous two sequels, providing proof that, at least for this third sequel, there was still some more comic hits left in what appeared to be a rapidly diminishing roach.