Drifting through Los Angeles, the strong silent Nada (the late great kilt-wearing professional wrestling legend ‘Rowdy’ Roddy Piper) gets some work at a construction site only for him and his new pal (Keith David) to soon discover a small group within the shanty town they’re staying at have a secret agenda to revolt against the insidious elite alien forces all about them whose hideous faces can only be seen by donning a pair of special sunglasses that reveal the full conspiracy in stark black and white, including the constant messaging of submission and servitude that these nefarious forces are transmitting through the television, the media and every possible means of mainstream advertising.

It was the last of three nights of taking my 14 year old daughter by hand through some important lessons offered by a few carefully chosen examples of modern cinematic horror (Math? Science? Phhft. The Shining is more important than all of that!!)… and where the first two (the aforementioned Kubrick classic and another Stephen King adaption, Carrie) are acknowledged as elevated forms of the genre, for the last, I decided to take her to the latest offering of the “M: Les Maudits” program for an effort that may not be quite up there in such rarified air… but certainly has garnered a well-deserved cult following over time.

While reaching nowhere near the heights of accomplished filmmaking of the nights before (which is barely a criticism when one was by a director internationally recognized in the pantheon of the greatest filmmakers of all time!), and certainly not at the level of emotional maturity (while also being filled with a lot of wonky cheese moments), it did come from a director John Carpenter who has, along with a lot of really good films, produced at least two recognized iconic classics (I’ll leave that up to you to decide which those are), and is a film that politically – as an open attack on the class injustice created by capitalism, as well as the control by the rich elites over the masses through consumerism and control of the mainstream – has far more relevant things on its mind, and cleverly uses metaphor in ways that illustrate the potential for genre as radical status quo criticism, certainly more than the other two films (which is why I always kinda laugh when I hear people say The Shining is the greatest horror film of all time… while it is undeniably a great film, Kubrick’s vision doesn’t understand the potential that is key to the genre anywhere near with which a director like Carpenter does).

Stirrings of revolt in tent towns of the disenfranchised leading to armed invasion and execution of the poor, with the marauding military operating as an extension of the will of the controlling aliens. Advertisements with messages just under the surface, hypnotizing the unaware masses to ‘obey, ‘consume’, ‘do what you’re told’, ‘get married’… and most of all, ‘sleep’. The host anchors on the televisions spewing messages of conformity that the barely conscious public ingests every word of as truth. A few of the informed shamelessly and opportunistically deciding to align with the insidiously mind-controlling alien forces, willing to trample on the backs of their once-comrades in hopes of ‘getting some’ (shown through Carpenter regular George Buck Flower’s transformed drifter character, who raises a glass of champagne in honor of wealth and success).

The political bent of They Live has clearly grown more relevant and trenchant, proven by its cult status having grown so large over time and well-known figures as Slovene philosopher and psychoanalyst Slavoj Žižek referring to this, on the surface, oft-goofily presented tale starring a former wrestling star making amusingly low-brow crowd-pleasing proclamations like ‘I have come here to chew bubblegum and kick ass… and I’m all out of bubblegum” as a ‘masterpiece of the Hollywood Left’.

All you need to do is replace the references to aliens with big business corporate elites and you have a literal translation of what’s exactly happening now… and how this capitalist thinking, taking the form of neo-liberalism, is quite literally destroying the world. Tent towns around urban centers are growing at extraordinary rates, the business class has grown beyond filthy rich at the expense of the worker, the entire political and mainstream media is under the control of the elites. This shit is real. It’s why M’s programming head Charlotte Selb posted, with little need to indicate any irony, that everyone should go see this documentary called They Live.

To be clear, this isn’t just Donald Trump and the Republican Party as evil aliens. This is the mainstream Left’s favored hero Barack Obama (and his adorable wife) as aliens. This is Stephen Colbert with a hidden ‘pizza face’ whose mission is to protect the elites and keep the establishment narrative within the corporate-favoring bounds (and who deserves the same shotgun blast as those TV hosts that Nada gives to the face in the film).

It’s quite radical, and amazingly daring, that this is a film which, it could easily be argued, is essentially reinforcing the notion of an individual terrorist taking on those who prop up the capitalist class system. While I don’t think Carpenter is quite radical enough to understand this, Nada isn’t far from a kinship with other real domestic political terrorists such as the Unabomber, whose long-form manifesto that recognized a massively destructive system in which so many are implicated by working within it – the one that ultimately led him down the path of the killing that he did — remains, according to many a political scholar, a truly brilliant and trenchant critical analysis of capitalist industrializing society (it’s been discredited by the mainstream, naturally… they recognize a danger to them when they see one).

Yes, it’s a film filled with the low-brow trappings of the B-est of B-sci-fi genre fare (the six minute fight scene that some people crow about is certainly entertaining, but it’s catering to the old school professional wrestling crowd favored by the pot smoking slacker-ish persona director Carpenter has slowly embraced more and more), with a sort of man-child Howard Hawks Western style hero at its center, and it’s not exactly subtle with its metaphors, but it remains perfectly on point, and entirely relevant. On the narrative level, Piper may not be the best actor (and his delivery of those one-liners so familiar to action films at the time, is quite bad… I don’t care how memorable they’ve become) but he has a masculine charm about him, and we should all thank Carpenter for giving us Keith David in this and The Thing, as he likely never would have had the chance to shine so bright without the two films.

What a pleasure to be able to talk to my daughter post-movie not only about the political messaging of the film, and how they’re reflected so accurately in the world in which we live, but also to introduce her to how important the genre itself can be (something forgotten and/or not understood by many horror filmmakers today, as they often look to merely ape favorite films and scenes they grew up watching with little connection to the context, or actually use the horrific imagery to reinforce status quo perspectives fed to them by the ‘alien’ elites); in its purest form, genre operates as a subversion, a critical challenging of — through the metaphors of gods, blood and monsters — mainstream belief systems.

Unfortunately, the film played in the Moderne, a theater I enjoy and support for its sound and image (and foremost for the ability to bring my drink from the bar into the theater!), but deeply dislike for its oft-smug hipster audience who have little respect (i.e., understanding) for genre films like They Live and go to not just laugh along at the more inept or goofy moments (of which They Live certainly has), but to mock everything they see, in some seemingly desperate bid to feel superior, like a bully picking on someone they know can never challenge them back. Of course, the truth is… it reveals the opposite. As they cackle like hyenas, missing out on the radical and subversive content of this particular film, or the subtler cinematic moments of wonder that can be found in even some of the lesser genre films of bygone eras, comfortable in their superiority (especially if they can get the rest of the audience to point, mock and jeer as well, as if they’re all celebrating a witch burning in late 1600’s Salem)… they reveal themselves as intellectually inferior to the film they’re viewing. 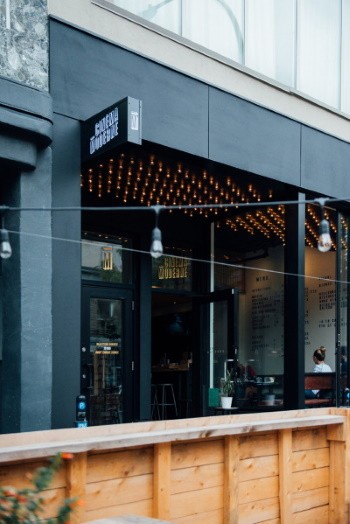 Which leads to how this three-night introduction for my daughter couldn’t have ended on a better note. As the closing credits of They Live played on the screen, and I was easily ignoring the uptight young woman directly behind me who kept ranting on in French (to her poor ineffectual boyfriend caught in the middle) about how outraged she was that I dared actually ask her to stop making so much noise, which included mimicking every bit of dialogue in the film (as I explained, I didn’t buy a ticket to listen to her) – as her boyfriend told me later in the lobby (with zero irony or the proper embarrassment he should have felt for describing it this way), she was ‘triggered’ at someone asking her to stop talking during a movie – I suddenly heard a young female voice directly confronting her, explaining in no uncertain terms of how inappropriate her behaviour was during the film. Thinking it was a fellow patron or perhaps a female manager… I turned around to discover, to my grand surprise, my 14 year old daughter had gotten up from her seat next to me and was standing directly in the offending woman’s face and letting her have it.

As the woman ran out, unable to handle any of it, leaving her meek boyfriend sinking as deep into his chair as he could go, apologizing profusely… what can I say?

Other than what a proud Papa Bear I felt like.