After getting gently, yet firmly, tossed from Monte Carlo, with their scams on the idle wealthy gone decidedly awry, the debonair, if slightly fumbling (with head matriarch Marmsy a bit more than ‘slightly’) Carltons, a family of grifters, happen upon even greener pastures of opportunity – namely, the uber-rich spinstress aptly named Miss Ellen Fortune (Minnie Dupree), who, after being saved by the charlatans from a train wreck (in an impressively elaborate action set piece for a romantic comedy — with cool miniatures and all) and having no idea of the family’s true opportunistic natures, invites them to move into her impressive mansion in the heart of London; only, as the con artists insinuate in, moving greedily closer to ownership over the estate of the aging woman, they suddenly find themselves unsettled by the growing possibility that perhaps Miss Fortune’s unenduring faith and belief in humanity is… unfortunately… starting to rub off on them in the most unexpected of ways…

As I’ve said a million times (or it feels like it), while they might have been a tyrannical and mostly all-around awful lot — threatening everyone around them into subservience, destroying the careers of any thesp (or anyone else for that matter) for daring to display even the slightest hint of independence – at the same time, unlike the faceless number-crunching corporations that run the studios today, those madmen moguls of old school Hollywood yesteryear at least genuinely loved the movies they were making! And most of them, like legendary control-freak David O. Selznick, producer of The Young in Heart, created works of entertainment (and I mean adult entertainment, even when ‘family orientated’) at such a level of quality it rarely ever fails to disappoint when going back for another look (not so uncommon for me, who’d much rather re-watch a week’s worth of intelligently crafted films from Hollywood Past then, say, two of the celebrated virtue-signaling consumer product from identity-politic conformist Hollywood Present).

The Young in Heart, a film I was seeing for the first time (projected on celluloid, thanks, as usual, to Cinéclub/Film Society head honcho Phil Spurrell), is an absolute joy of a film, filled with charming performers delivering consistently clever and crackling dialogue with near-impeccable timing and a confidence that makes it all seem so effortless. It was a treat as well to see the impressive set construction, masterminded by legendary production designer William Cameron Menzies (who also directed the sadly un-regarded 1953 film Invaders from Mars – though not unnoticed by Tobe Hooper, who remade it in 1986, of which I do plan an upcoming double feature — and the much more ballyhooed HG Well’s adaptation in 1936, Things to Come), with both the French Riviera and the indoor Wombat car lot (a focal point location to many an amusing situation) two startling examples of Menzies’ magnificent large-scale modernist leanings, while the Monte Carlo police station, where the temporarily chastened Carltons temporarily find themselves on the way out of town, a cleverly conceived amalgamation of shadows passing behind closed blinds and straight lines of office décor, revealing of his flexibility in creating the visually exciting out of seemingly little when called upon.

From Roland Young, an actor of amusingly presented stuffy English manners, as the Carlton father ‘Sahib’, claiming to be a heroic officer of the Bengal Lancers (which we learn was just a walk-on part he played in a small theater play in Toronto years before), who shines perhaps brightest in the hilarious moment when he wishes those around him a resigned farewell, with a funeral dirge swelling on the soundtrack, forced as he is to take his first job as a car salesman at the Wombat lot, to Billie Burke, of the noted high wavering voice, as the slightly daft Marmsy, whose relatively short-shrift in this film was made up for by being bestowed the greatest cinematic immortality of the lot of ‘em, essaying the role of that Good Witch of the North known as Glinda, just the next year, in The Wizard of Oz, to the cleverly bantering tandem Janet Gaynor and Douglas Fairbanks Jr, playing sister/brother George-Ann and Richard, sitting around rather comfortably talking about their latest grifts, inevitably revolving around seducing some sucker of a rich suitor into marrying them (though always seemingly strangely jealous of each other as well, a consistent hint of something incestuous between them, a glimpse perhaps into the underlying darkness of the never-secure, ever-identity-shifting quasi-sociopathic con man world of the grifter, which the film – smartly – doesn’t get too close to as far as exploring, as it would have sullied the overall sentimental and uplifting comic nature of the film), to Richard Carlson, a popular role player in big Hollywood fare at the time, before eventually being relegated to ‘inferior’ material (at least that’s how he thought of it, and would apparently make sure everyone on the sets of those later movies knew it) of 50’s genre fare (and with classics like Creature from the Black Lagoon and It Came From Another World on that later resumé? – I have to say, Dick, I respectfully disagree), to the triumphant Dupree as the angelically naive Miss Fortune, and on to all the bit parts, Young in Heart is a triumph of casting (and that’s without even mentioning the beautiful Chaplin paramour Paulette Godard, as the hard-working woman who eventually guides Fairbanks Jr’s Richard from ever-scheming shyster to a man with pride in himself).

While The Young in Heart isn’t as great as, say, It’s a Wonderful Life (I mention it only because I saw it recently – again, thanks to Le Cinéclub/The Film Society), but that’s only because it not attempting to plumb the depths necessary into darkness and despair that that Xmas classic aspires to (a requirement for the eventual uplifting happy ending to have the profound resonance it does)… but that’s okay; Young in Heart may be deliberately lighter fare, but it doesn’t mean it wasn’t capable of dredging up a tear or two by the end.

What it does unquestionably manage to do is take a story that could easily have fallen into agonizingly over-sentimental shmaltz and turn it into a wonderfully amusingly-told celebration on the value of compassion and non-judgement. The fact that Miss Fortune, a lonely old woman, filled with regret in her life, responding with overwhelming compassion for the Carltons – rather than with anger — upon learning of their true character, seeing them as lost souls to be pitied, having chosen a path with no real home or identity to be proud of, leads directly to the Carltons themselves coming to understand the misguided direction of their ways, might be a Pollyanna version of life, but yet – like all worthwhile Christian parables – it contains within it resonant truth. Finding commonality over divisive difference, recognizing the best of people does exist along with the worst of them, is the kind of thing that many of my self-proclaimed ‘Leftist’ acquaintances might take a page from when screaming ‘zero tolerance!’ for whatever transgressive actions the establishment media is directing you to be focusing your attention on in your enemy. I look forward to the film showing as part of a programmed Cinéclub/Film Society night, as I’ll be for sure bringing my daughter, and anyone else I can convince to attend. 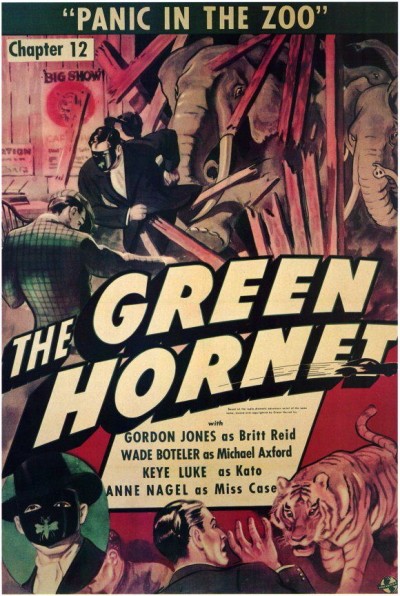 Of course, it wouldn’t be a Cinéclub/Film Society kinda night without at least one additional cinematic morsel thrown into the viewing mix, and this one was no different, with a 16mm glimpse at the 1940 serialized crime-stopping adventures of Britt Reid (Gordon Jones) — by a day an investigative newspaper publisher (ala, “Superman”) and by night, the vigilante Green Hornet operating out of his cave with his souped-up vehicle (ala, “Batman”), wielding a weird wing-looking kinda sawed-off shotgun and helped along by his trusted (definitely culturally iffy) sidekick Kato (a character used to much greater effect, I have to say, as Inspector Clouseau’s ‘little yellow friend’ in the later Pink Panther movies). With this twelfth episode picking up in typical serial style from the cliff-hanger ending of the previous entry, joining the flimsy mask-clad wearing Hornet mid-fight on a speeding train (ending the commotion with an enjoyably spectacular train crash in miniature – the moment that provides the one random connection to the main feature), then moving into a fast developing tale about some gangsters mixed up at a zoo, leading to some animals escaping and some stunt men fighting them back, and ending like it began, in typical cliff-hanger fashion yet again, mid-fight (this one in a burning building) for the next one up , Panic in the Zoo provided an fun little glimpse into the Saturday morning serial the kids used to get excited about… and I gotta admit… I was left kinda wanting to see how the cliff-hanger resolved in the next episode…