From the collection of bland actors playing touchy-feely characters written to tell us (at least) every ten minutes how they feel in the most do-gooder terms (and if you’re thinking while you watch ‘Gee, they’re just like us, why, it’s so easy to separate out the bad guys from those who just wanna do good in the world, isn’t it?’ Trust me, you’re deluding yourself – chances are, you suck like every other human), to the pandering Darabontian attempts at prolonging every moment as if this alone will somehow create meaning (rather than, you know, actually creating meaning within the writing and narrative), to the way too long time taken between the action gore set-pieces (and not just because the characters are insipid, but because it’s, after all, a zombie show– sorry, ‘walker’, or ‘lurker’, or whatever iteration they choose to call them), it’s fair to say I pretty much despised the debut season of The Walking Dead. In fact, watching the season made me realize that the comic, while I still favour it over the show (there’s a lot more bleak stuff going on in the comic – the death and brutality rate comes at a far quicker pace – thankfully, Darabont wasn’t in charge to make every character death ‘meaningful’ — and it all feels much more ‘war zone’-like), was more flawed than I realized upon first reading (after all, the foundation of the show’s drivelling dialogue comes right from the comic).

Perhaps the most unsettling and tasteless thing about The Walking Dead, both comic and show, is the reactionary heart that beats so strong at its core. The entire drive of the show, with all the love and caring it gives to its central, almost entirely God-fearing folk with simple values (or if they don’t believe in Chay-zus, like our policeman hero Rick, he finally gives in and desperately pleads before a statue of the big crucified kahuna in the first episode of the second season, a season opening so eye-rollingly jaw-droppingly bad, it has not just one long-winded confessional before the statue, but two – admittedly, I was ready to give up on the show right there, but my 13-year old daughter’s desires won out and we’re still watching) and their plights and/or deaths, is to confirm the importance of humanity; and even more so, of the white patriarchal nuclear family.

No wonder it was such a hit. It’s one of the few shows with an appeal across the American political divide. The ‘liberal’ (big quotes on that) crowd can relate to the delusional sense of ultimate goodness that the mainstream agenda loves to convince them is who they are (and the show works to confirm), that all they have to do is vote for the right party (the Democrats) and burn the proper witch (Trump) and they can feel a smug satisfaction that all is well. And the Trumpers can cathartically enjoy its barely-contained metaphor of warding off the coming apocalypse by returning, preferably using any violent means necessary, to the sainted values of family, religion and guns (namely, by shooting in the head, one by one, the dirty, unwashed and identity-less hordes of immigrants – sorry, I mean blacks – oops, I mean queers – no, no, I mean zombies looking to push through the gates and past the walls to defile their more ‘human’ way of life and perfect little society) with a white male policeman heading the group, no less (eventually teaching his son how important it is in these times to know how to handle a gun). 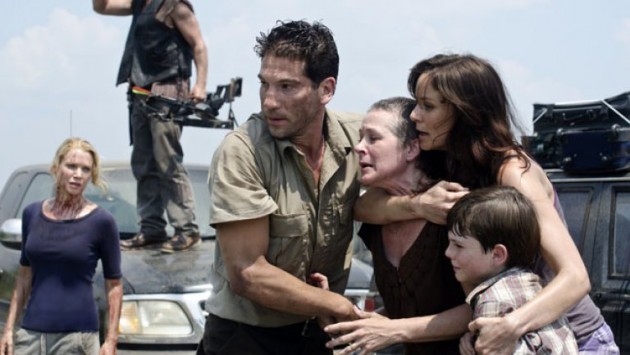 It seems revealing that, in a mainstream landscape usually hyper-aware of whatever the latest faux liberal status quo position is (they better be – after all, they’re usually the ones who have manufactured it as a way to strengthen the identity politics schism used by the elites to control and exploit the populace), that they didn’t include at least one character with some variation beyond the traditional gender or sexuality norm… and that the single black character, T-Dog, is mostly a throwaway, with little agency. My daughter, who, I’m proud to say, is growing pretty good at picking up on narrative clues (especially clunky, badly conceived ones), sensing the obvious throwaway characteristics of the character (he’s like one of the expendable red shirts in the original Star Trek show, beaming down with Spock, Kirk and Bones, included by the show’s writers as fodder to allow whatever menacing alien creatures they run into a means to display their deadly force).

I have a hard time believing, in this time of endless outrage over not bowing to the identity politic movement of the day, it never dawned on the The Walking Dead creators that they didn’t have a single gay or trans or queer or gender fluid – or whatever (you get the point) – character. Not that I’m fighting for it, by any stretch (as when these kinda shows do, they often ineptly handle it, with the characters often feeling entirely and cynically thrust in – for instance, given heroic status before narratively earning it — as a way to appease the potential ‘liberal’ outrage). Then again, a flaming queen or overtly queer character in charge, instead of the uninteresting Rick, who is working to establish the tired old patriarchal rules to the group? Certainly would be something to see… and if the creators handled it embarrassingly bad? This has potential! At least it wouldn’t be mired in mediocrity.

I will give some props to season two. While it still consistently reveals a distinctly unpleasant ideology (the eulogy scene for the latest of the group to become a zombie snack, Dale, in which copper Rick goes on and on, in typically overwritten fashion, with words about the deceased ripped straight from the original Dale character description in the writer’s room, with all of the assembled then going on to ‘honor’ their fallen comrade’s death by killing off a massive group of zombies, shooting one after another in the head, with each feeling a new sense of purpose, to swelling music, as if, without the slightest hint of irony by the filmmakers, there’s something beautiful and meaningful to this act of mass slaughter, is particularly deplorable), the merging arc of the missing Sophia over the first half of the season with another zombie slaughter at the barn (in which some of the characters, including the patriarchal head of the seemingly idyllic farmhouse our wandering group have stumbled across, played by the now-deceased wonderful character actor and favourite of _ Exorcist 3_ director William Peter Blatty, Scott Wilson, react in horror over the exterminations of the walking dead who they had kept alive in hopes for a cure) is, by far, the best and most complex scene in the entire show so far. Some genuine pathos is created, for once, in the hordes being destroyed (and because of it, a loss of humanity for our characters as they do it is at least considered). I wouldn’t be surprised if Darabont (if he was even around at this point, as he was in the process of either being ousted or quitting, depending on the various stories, during the second season, which, hey, in my eyes, isn’t the worst thing that could happen to the show) saw this as his attempt at touching directly on the infamous My Lai massacre moment from the US/Vietnam conflict (and, I have to brag a bit again, my daughter perfectly nailed what and where Sofia’s fate was gonna be way before I saw it coming). 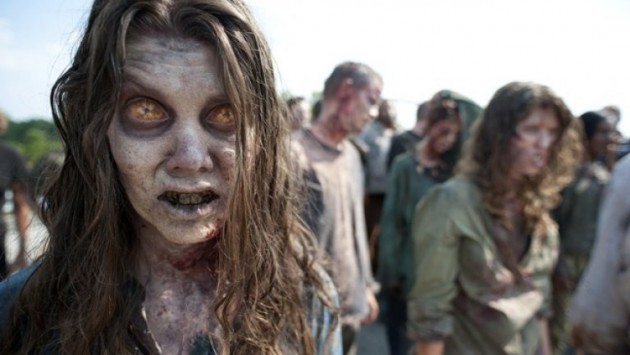 While I initially felt John Bernthal, playing Rick’s cop partner pre-apocalypse, was as banal as most of the rest of the cast, his evolving portrayal of Shane as a mounting and dangerous threat, slowly boiling over at feeling more and more isolated, with his conviction growing that his brutish, only the strong shall be protected, style of command as the only thing that will keep the group alive, whether they know it or not (while losing more confidence in his once-best friend Rick’s actions), the actor reveals a surprising amount of depth and intensity in the role. His arc over the season works well, and a lot of it has to do with his anguished (and guilt-ridden) performance (with its conclusion, as usual, written and directed with way too much over-wrought emotionality).

Even with the pluses achieved in the second season (after a first that had almost none), ultimately, the show still remains the same. It isn’t about a rag-tag group of final survivors recognizing that their species was the single most destructive component to the planet, determined now to re-conform into something that perhaps would work productively within the paradigm of the remaining flora and fauna. It’s not about an existential questioning on mankind’s position in the universe, or its role in the mass extinction that scientists are telling us we are literally in the middle of right now (i.e., the zombie apocalypse – get it?). Nah. It’s about providing a patronizing pat on the head to an eager-to-accept audience (no wonder they love it), so they can walk away with self-assurance. Sure, _ The Walking Dead_ says, there may be some bad apples amongst us that have to be burned at the stake every now and then, but overall? We’re good. We’re damn good. And the quest to re-build human society back into its exact same image is a noble one. It’s Trump America meeting faux liberal self-satisfaction. Darabont may have been outraged by how he felt his show was treated, but he should take solace. He made buku bucks selling us this ideology.

Me? For the sake of the Earth, I’m rooting for the zombies.