If you happen to be one of the two or so readers (okay, I’m likely being optimistic) of my original posts on the first two seasons of The Walking Dead, you’ll perhaps remember my detailing of how generally awful I found the series so far. While not completely devoid of inspired moments here and there (with the brutally nihilistic barn massacre from Season Two, in what I’m almost hundred percent sure that series developer and original show-runner Frank Darabont thought of as his recreation of the Vietnam War ‘My-Lai Massacre’ atrocity, even if that real-life incident had far more casualties, with over five hundred Vietnamese, mostly women and children, slaughtered by a command of US soldiers), with the never-ending flow of sickly sweet Darabontian over-emotionality, selling of the importance of re-establishing nuclear family order that reeks horribly of the type of neo-liberal perspective you just know Darabont is a head Gibble of, and a fetishizing of guns (as well as the abject objectification of the mindless zombie hordes trying to push through the fences to get at our good people being just a bit too queasily reminiscent of Fox News covering the Mexican illegals hysteria) that feels a little too aligned with Trump’s America (well, with the pandering to both neo-libs and the red-hat Trumpers, you can’t argue the show isn’t vying for an inclusive American audience!) 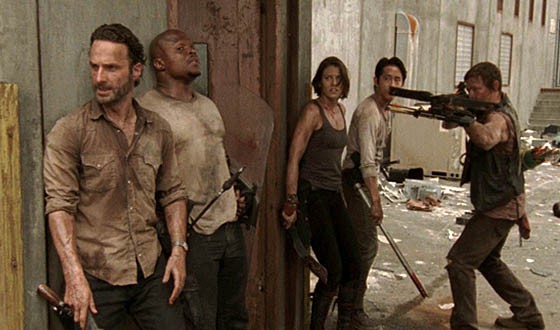 Overall, I’ve found the whole effort mediocre, with perhaps its worst crime being that it has nowhere near the graphic violence and brutality rate of the comic. I confess, after that Season Two opener, in which we had to endure – not one – but two unending soliloquys before a church Christ statue with a character heroically admitting their weakness and having the humility to beg for hope and strength (which they’re actually granted, if you play close attention, in that grand supernatural style of something like one of those gleefully-insane modern Christian movies), I was close to finding the will to break out of my own OCD behaviour (without Christ’s help even – or as big crazy Mel refers to him, the Christ) to hit eject and discard that Blu-ray back on my shelf with nary a look back… but… since my 14 year old daughter was watching it with me, well… I could tell she wasn’t gonna allow it. So I sat back down and endured (usually with a little help from – no, not Christ – an even greater friend bearing the label of Jameson).

And what do you know? Perhaps it was the departure of Frank Darabont, the show’s original creator and showrunner, that did it; whatever the reason, the show’s grown (a smidge) better. While the collection of original characters (well, the ones who haven’t become walker-food… yet) remains fairly bland (though, I admit, I’m slowly starting to warm up to Andrew Lincoln with his new scruffier longer-haired appearance starting to make him at least look the part of his tortured leader character, ex-cop Rick Grimes, if not always able to reach the emotional depths), things have at least gotten a lot nastier and a bit more fun. The gobs of action and violence is certainly a welcome reprieve from all that false and pandering emotionality they kept gushing at us in the first episodes. 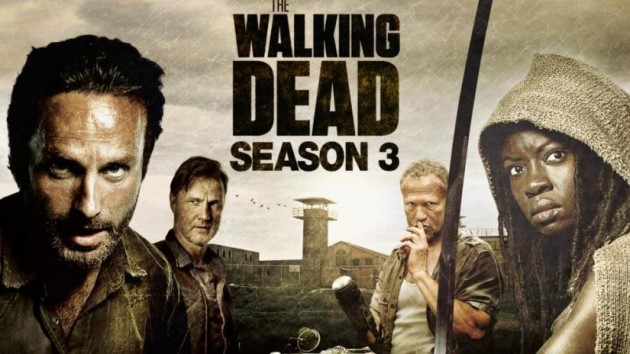 The introduction of the maximum security prison where they’ve elected to stay (including some inmate characters, a few of them potentially deadly, leading Rick to take the law into his own hands), as well as the seemingly idyllic enclosed community of the Governor (David Morissey) who we’ll quickly learn is a sociopath (both taken straight out of the comic, with some small narrative differences as well as making the character a white dude rather than the Hispanic he is in the comic) where the easily misled Andrea (Laurie Holden) ends up with (the finally introduced) comic-book style sword-wielding, cool hooded African tough bitch-of-few-words Michonne (Danai Gurira) are fairly welcome additions (though I can’t say I’m particularly a fan of the actor Morrissey who plays him — I find him, much of the rest of the cast, a bit bland).

Scott Wilson as the bible-thumping, learning to be reasonable Papa Bear who keeps seeing family members getting munched, is perhaps my favourite actor on the show, if his character a bit unremarkable; his role as the sort of moral advisor to Rick and the gang is just another queasy nod towards the show’s clear perspective of the sacred value of re-establishing human society in the same exact image that’s actually fucking up the world in the first place. While the showrunners have nowhere near the balls to approach the idea that mankind, as currently constituted, with the hierarchies and belief systems adhered to, is actually the greatest force of Armageddon on the planet, it does manage in this third season to play out some amazingly cruel-minded reflections on the state the surviving characters are willing to go to survive. The later episode where Michonne, Rick and his son Carl (Chandler Riggs) travel together and keep passing a traveler begging for help ends up with an appropriately chilling conclusion reflecting an eroding humanity on their parts. 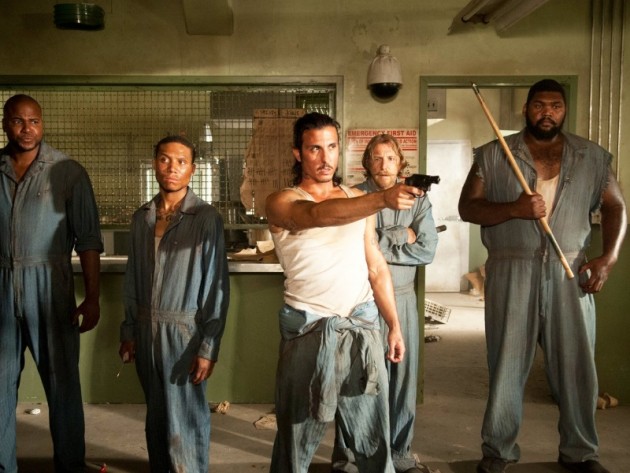 Easily duped Laurie who can’t see through the obvious that everyone else can – namely, that the Governor she’s in lust with is actually a very criminally insane dude with lots of bad intentions – renders her character even more unlikeable than she was from the beginning (I’m pretty sure I remember reading in the horror rags at the time giving her character props as some kind of feminist icon – talk about an ridiculously misguided reading).

While I must admit my estimation of the comic has come down a bit after watching it turned into a television show that’s brought forward the flaws I’ve already mentioned (treacly dialogue, lack of complexity, abhorrent and pandering underlying themes), the fast read of it allows for a much more harrowing and intense experience. While Season Three has improved the show, it would have to go a lot further for me to say it’s actually good. Six more seasons (and counting!), apparently some future theatrical films and an offshoot series Fear the Walking Dead … I’m not sure I’m gonna make it.