After a hotel mix-up, two sisters Karen and Jennifer, with their friend Vicki, a local television reporter (ex-Bond girl Barbara Bach) trying to get away on small town assignment from her pesky square joyed boyfriend-with-a-football-injury, end up staying at the foreboding farmhouse of the very shady museum-owning Ernest (that irresistible oddball Sydney Lassick, just a few years removed from his performance as one of the fun-loving mental patients in One Flew Over the Cuckoo’s Nest) and awkwardly subservient wife… with both somehow forgetting to mention the presence of something very creepy lurking in the basement… 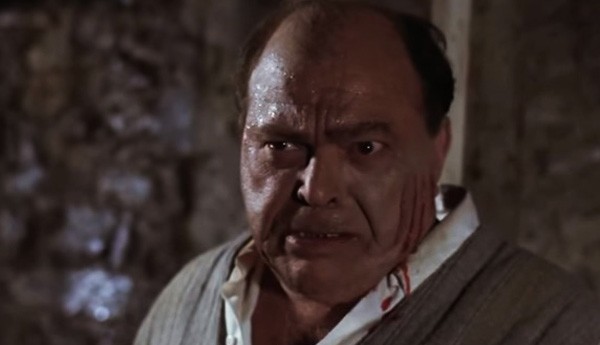 Ah, a secret incestuous relationship leading to a ‘monster in the floor boards’, a family with a history of violence and bloody death, awkwardly staged murders with ham-handed visual metaphors galore (one involves a chicken getting its head cut off and the other a smooshed bowl of cherries)… sure, the French may have had their 60’s early-hipster anti-Hollywood period of the Nouvelle Vague, but nothing was quite like America’s own, much less polished (if equally as low budget) New Wave of the 70’s and 80’s, in which indie horror pictures were being churned out all over the US, fighting back against the domination of big studio pictures by happily throwing in as much jaw-dropping anti-social sensationalism as possible; perversity, nudity and grand guignol gore. And while, for the French, an artistic aesthetic was king, for the Americans, it was… let’s just say… less essential. While some of the filmmakers toiling away in these meager-budgeted affairs did reveal brilliance (Frederick Friedel with his deeply under-appreciated grindhouse twosome, Axe and Kidnapped Coed, for instance), many proved more workmanlike (if not worse) in their overall approach and execution (with the films themselves remaining always at the least intriguing for their seedy ambitions).

The Unseen was one of the few films from notorious sleaze-master director Steinmann that I hadn’t yet seen so I was definitely intrigued (even in the slightly pink-o-vision form the faded 35mm print allowed for). While I haven’t seen his Linda Blair-starring LA-set vigilante piece Savage Streets in quite a while, I have fond memories of it. I also have some affection for his fifth Friday the 13th franchise entry (“A New Beginning”), not because it’s particularly good (it isn’t), but because, for a franchise that had some fairly clever producers always working to find an angle for each new entry from which to invigorate an essentially retreading narrative, with that one, by bringing Steinmann on board, they decided on the scuzzy route. 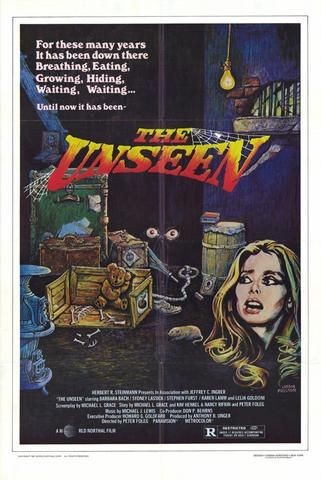 The Unseen bumps along a bit slowly for the first hour or so. While Lassick and Karen Lamm go all out in the creepy department as the sweaty museum proprietor and his clearly batty ‘wife’ (oh, the secrets!), Bach and the girls aren’t particularly the most captivating of thesps (and, weirdly I find myself constantly distracted when studying Bach’s face, as her round face, high cheek bones and wide eyes remind me a bit of a wild monkey about to bite someone – though, I’d say, about ninety nine percent of the world disagree with me on that, so I think she’s relatively safe from the slings of my naughty-naughty beauty judgments). Things really start to enthusiastically ratchet up in the last 30 minutes though, as the ‘thing’ in the basement is revealed (and while the actor playing him might not be following any true psychological profile, he certainly makes an impression, with all sorts of wild physical ticks, emotional sounds and movements). By the end, I couldn’t help but cheer as, in a moment of grandiose cinematic nihilism, Bach’s gimpy boyfriend’s knee gives out just before he can save his lady love from the blade of an axe (though, don’t worry, somebody else might just be around to save her…).

Where those French films tended to idolize the beauty of “Female” (well, really hot, internationally celebrated ones, anyway) – and let’s be clear ‘idolatry’ is NOT empowerment (it’s the mirror image of profaning and just another form of male control) — its decade-later American counterpart was much more concerned, for better or worse, with the exploitation-minded literal dismemberment of usually much less glamorous females. A big difference of course, is that French films were more artful in creating their artifice. 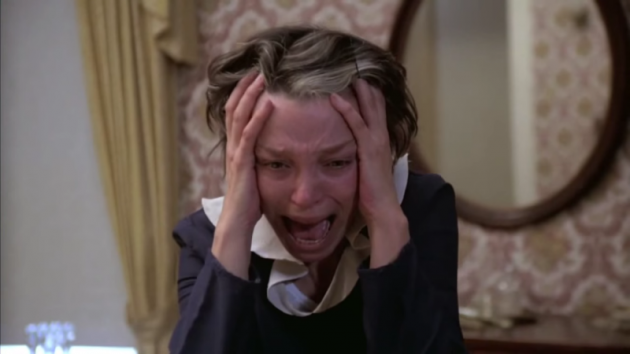 For me? As much as I enjoy the (male) French movement and find myself engaged by the intellectualism and cheeky thumb nosing at the mainstream, I admire the films of the American movement even more. I find them more honest, less self-aware and certainly less self–aggrandizing in their often-bumbling attempts at creating cinema (and more open with the misogyny). While a prominent Nouvelle Vague director like Jean Luc Godard is as concerned with celebrating himself as he is the left-wing messages his films deliver, just look over at The Unseen, whereas pedestrian as the first hour may be, the final shot provides a sublime image true to the dark bloody heart of the movement; an insane and devastated mother lying on a dirty basement floor clutching at a now-dead human monstrosity her perversity had created. It’s a simple, pure representation of the dark secrets and deep psychic sickness lying hidden just below the American floorboards, something these indulgent flights of sensationalisms are all about.

It was a night at the Deuce, a wonderfully nostalgic monthly (35mm film only) program at the Nitehawk, that included the always enthusiastic and amusing MCs providing another informative slide show presentation, filled with evocative stills from 42nd street through the years, this time on the long gone but never forgotten grindhouse Anco Theater.