Wealthy sportsman and international adventurer Kay Hoog bails out of the annual San Francisco yacht race to undertake an expedition to Mexico in search of an immense treasure of a lost Incan civilization, followed by the beautiful and lecherous Lio Sha, with her assassins from the sinister crime syndicate, ‘The Spiders’. So, that’s Part 1. For Part 2, the stakes are raised, as Hoog is now driven by revenge against Sha for having killed his new love (shown at the end of Part 1) as the rivals race each other (with Sha again getting help from her nefarious ‘Spiders’ troops) to uncover a Buddha-shaped diamond rumoured to have magic powers that has them chasing each other from the hidden underground crime world in San Francisco’s Chinatown, across building tops in England to deep within the volcanic caves of the Falkland Islands where deadly gasses endanger them all.

With both my on-going “Halloween” franchise revisits and looks at all things filmic “Cheech and Chong” recently providing lesser returns, I decided to add to the list and begin having a go at the twelve films (as well as whatever ancillary pleasures might eventually derive, in film and novel) on that megalomaniacal mind-controlling Dr. Mabuse who sprang forth directly from the same German nightmares and anxieties that followed in the aftermath of World War I… and which eerily foreshadowed the coming madman figure at the center of the coming next World War.

As part of my foray into the world of Mabuse, to catch up with the beginnings, not only did I read the original recently translated 1922 novel by Norbert Jacques that introduced the nefarious doctor, whose original ambitions were slightly less grandiose than his later filmic ones (he merely pined for securing an empire in South America, with him as lord and master – somewhat mirroring the thoughts and paths of many a Nazi criminal post-World War 2), but I figured I’d also take the opportunity to catch up on some early pre-Mabuse works of celebrated film master Fritz Lang, apparently a bit of a terrifying character himself who many would claim shared more than a small amount in common with Mabuse (including having a larger-than-life – and often fictional – life story that he carefully cultivated).

I’ll talk more about the book later, when I get to Lang’s first cinematic incarnation of the power mad doctor, fast-tracked and made in the same year as of the novel’s release, in a later post (I think anyway… I’ll see when I get there). For now, first up was The Spiders, Lang’s third film (and first that isn’t lost forever – or until found in some abandoned warehouse somewhere, fingers crossed).

An early work for hire for the director, The Spiders was released in two parts over consecutive years (something apparently common to many a big German production at the time), with the clear objective of loading up on excitement; providing a supposed glimpse at exotic worlds never seen before by the mostly working class audience (when in fact, with its hand-wringing secretive Chinamen and wildly-gesticulating Mexicans, showing nothing more than comically racist caricatures in the service of triumphant western white imperialism – which, to be fair, isn’t much different than the attitude of George Lucas’ Indiana Jones and the Temple of Doom). 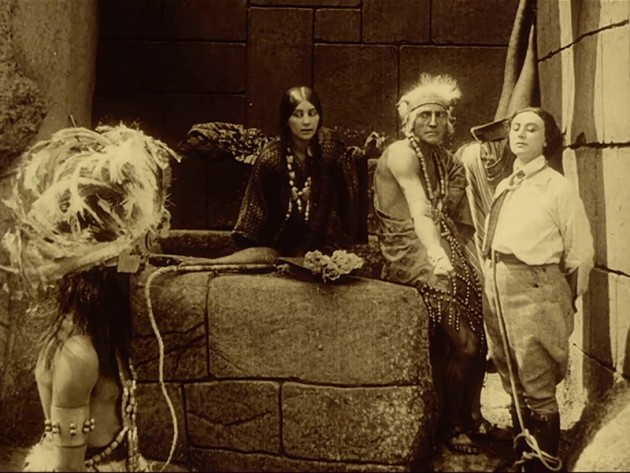 Speaking of that Lucas and Spielberg creation, the privileged, yet not-afraid-to-get-down-and-dirty character played by square-jawed Carl de Vogt does remind a bit of an early cinematic Indiana Jones (yet with nary a hint of the easy charisma of Harrison Ford). Its high-flying espionage-style narrative plays like an early draft of Mission Impossible; and, yet, even knowing of the impressive physical effort which I’m sure was required to shoot all of these locations with that early laborious film equipment, the overall result ends up coming across as somewhat of a pedestrian affair.

Along with de Vogt, none of the actors stand out in their roles and the action sequences don’t stand out, with none of it really hinting at the fascinating, almost expressionistic (but not quite) decorum or the wildly vibrant camera movements that would soon become such an important part of Lang’s astoundingly brilliant and innovative silent film career. It seems obvious that the 29 year old Lang was learning the filmmaking ropes at the time (on a big budget major German release, no less – gotta say, it sure beats film school if you can get it) and hadn’t found anywhere near his voice to come (though his monstrous draconian presence on set was apparently fully formed by this point).

There is a nicely clever moment of deliberate filmic artifice that would certainly have impressed later filmmaking master Alfred Hitchcock if he ever saw it (which he likely did) where a film dissolve is incorporated into a telephone discussion to allow half the set be replaced by the person in his office on the other side of the line… only to have an accompanying dissolve disappear the office and return it to the complete original set, allowing the single character to hang up and run off. It’s an early inspired use of the medium, reflecting the grand possibilities cinema offered, that the early European silent masters like Lang, Pabst and Murnau became the original masters of, revealing an immediate and primal understanding of cinema that remains as cogent and true today (despite how few of today’s corporate filmmakers seem to understand that), with only the technology changing.