“I bet it was the boyfriend who did it. It’s always the boyfriend.”
“Getting so you can’t trust any man anymore.”
“Or any woman.”

A sharp-shooting woman-hating sniper (long-time B-movie character actor Arthur Franz) is loose in San Francisco and, as the city’s unease ratchets up with each female victim, the pressure from above on the two officers (Adolphe Menjou and Gerald Mohr) assigned to catching the serial killer grows.

Seeing the The Sniper again, I’m just as startled by its gripping, simple and brutal vision as when I first saw it at the Film Forum in NY over a decade ago. It’s not necessarily anything overtly violent in the film (the scenes of him actually shooting his victim, while powerful, are cleverly and artistically presented, so as to admire their execution as much as be disturbed by the deed – other than the impressive stunt fall of the only man he kills, a tower worker who discovers him from his perch nearby), but more the palpable sense of underlying gender hatred and anger revealed seething under this American society.

This is no 1950’s “Father Knows Best” television sitcom view of the world in which safety, comfort and the building of societal foundations come from gender union. Uh uh. This is one in which the male hospital nurse quietly denigrates his wife and questions why he’s even married (“I don’t get it”) as he unwittingly stitches up our sniper’s hand, and even the cops on the sniper’s trail share jibes about not bothering to clean up for your wife, only for when she leaves… and men’s jealousy and drunkenness leads to aggressive attempts to control the women in their lives. 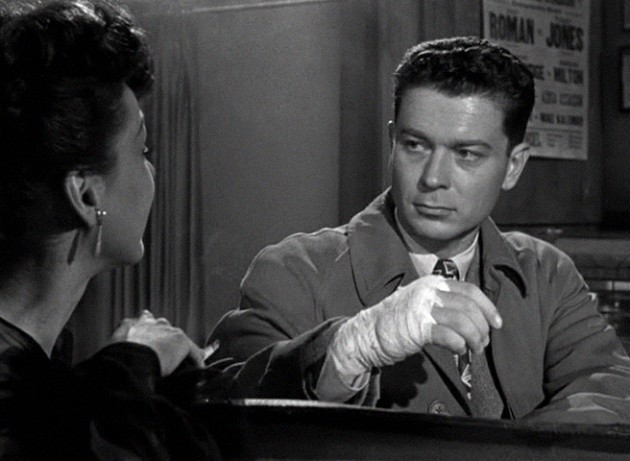 The first half of the film follows the anguished sniper; learning little about his past, other than that he hates his mommy (one of the few convenient tropes familiar to way too many films, but does have a place in a film that looks so bleakly at the depths of gender conflict) and has a history of violence against women, the film ends up creating a figure of existential anguish, with a surrounding society both ignoring his pleas for help (the hospital staff is too busy to pay attention to the fact that he’s clearly mentally unstable and deliberately burnt his own hand) as well as, more disturbingly, enabling his deep-seated seething sexual repression and hatred of women (including getting treated rather brusquely by a number of women, but who can blame them when we’ve overheard snippets of conversation by vengeful female passersby tell how badly they’ve been treated by men). Dmytryk does an impressive job capturing the emotional claustrophobia of the character.

The second half, while less powerful (to be fair, it’s hard to top the first half of what could easily have been a fairly straight B-movie noir programmer, yet ended up coming across as something searingly personal), remains effective nonetheless. It switches gears to follow the police investigation (with Menjou’s Lieutenant character inexplicably named Frank Kafka, as I could gather little commentary or connection to the closely named absurdist writer or his work) – as well as the pressures coming from the higher-ups – to find the serial killer that’s panicking the city. The Sniper has a similar narrative trajectory to, as well sharing a number of other commonalities with, Joseph Losey’s surprisingly effective 1951 remake of Fritz Lang’s German early cinematic masterpiece M (including sharing a what was becoming an increasingly common moment where a figure of authority gives a compassionate speech that sounds suspiciously like a plea to the audience for psychological understanding of the likely abused outsider committing the psychotic and/or deviant behaviour the film is centered around). 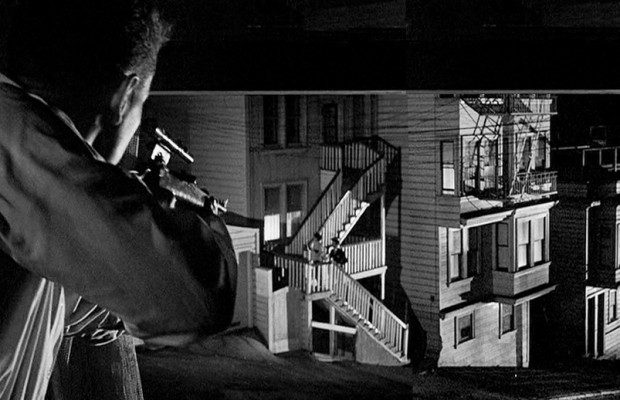 As more familiar as this second half of the film becomes, some fascinating elements continue to develop — not only a continuation of the underlying misogyny in the cops themselves, but a powerful ahead-of-its-time anti-gun message. With the war in Europe less than a decade from being over in 1952, and an army’s worth of now-fully trained sharp shooters dropped back into a conflicted society, the film seems to be saying, what do you expect but violence and struggle? Bringing the point home, director Dmytryk constructs a beautifully conceived few seconds that perfectly capture the message in a simple dissolve; as the tormented Franz character, able to – this time anyway — resist the temptation to shoot, he sits back on the roof, with the camera then cutting to a close up of his hands instinctively massaging his weapon, as if trying to find a home for his repressed desires and stunted need for expression into this instrument of determined destruction… with the shot then dissolving into a new pair of hands — those of a female lounge player whose found something more constructive to do, playing beautifully at a piano. Not surprising, however, considering the world view of the film, an ugly drunken man soon comes over and commands her to play it again even though she doesn’t want to, destroying the moment.

Perhaps even more startling is that the film ends not with a wild shoot-out, or a right-wing wish fulfilment comeuppance, but rather on the now-caught killer’s dejected face, as a tear runs down his cheek. It’s almost as if, at that moment, he’s the filmmaker himself, guilty but enabled, destructively hateful and self-loathing… yet ultimately filled with a terrible sadness not just by what he/this killer has done, but what the world (and we, the audience) has become.

What’s fascinating is that the director Dmytryk, just a few years before, was one of the Hollywood Ten, blacklisted by Hollywood for communist leanings (and even jailed for a time) at the behest of the insanely fear-mongering House of Un-American Activities Committee. He had to move to England to resume his film career… and The Sniper, this entirely critical view of America was amazingly one of the first films he made upon his return! No wonder the film is brimming with anger. One of the conditions Dmytryk had to work under for The Sniper was that he had to accept directing the shrill right-winger (and admittedly fantastic actor in the right role) Menjou… but I’d say Dmytryk got the last laugh, in his handling of the film’s subject matter, which all perhaps went right over Menjou’s head.