‘The name Mabuse is just a personification of criminality. It seeks for power and is motivated by megalomania.’

Gert Fröbe’s rumpled rain-coat wearing inspector is back (looking and acting, it finally dawned on me after his appearance in this second Mabuse entry, suspiciously similar to Peter Falk’s “Columbo”, the iconic homicide detective from 70’s American television who also hid his shrewd cunning under a deceptively bumbling and dishevelled exterior), although no longer named Kras, but suddenly re-christened Lohmann (referencing back to the original inspector, played by the equally gruffly charming and plump Otto Wernicke, from Fritz Lang’s earlier Mabuse years and M) reluctantly forced to cancel his eagerly anticipated fishing holiday to investigate a murder (a conceit similar to the beginning of the 1993 Mabuse entry in which Wernicke’s reluctant Lohmann is forced to cancel a night at his beloved Opera due to nefarious Mabusian doings) of an Interpol agent who carried with him evidence against a shady criminal organization that the inspector begins to suspect might actually be headed by that shadowy underground mastermind crime-lord he was sure he witnessed dying at the end of the previous year’s _The Thousand Eyes of Dr Mabuse_… but then again, as the quote from the film above implies, with as omnipresent and powerful an ideological evil as Mabuse… can he/it ever be wholly contained? 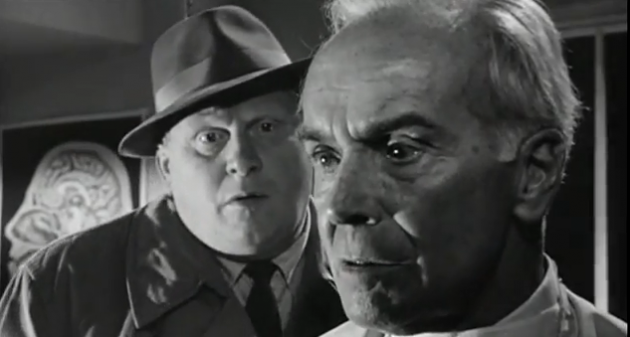 “Return” is the fourth Mabuse film, and while it’s the first not directed by Lang, with its palpable sense of paranoia and deceit, in which virtually no one is trustworthy and shifting identities is the name of the game (going all the way, this time around, into meta- territory, from the aforementioned Fröbe inspector’s sudden name change referencing a character he’s modeled on from 30 years before, to the balding cherubic-faced actor Werner Peters, having played a pushy salesman who we suspect might be a murderer until he reveals himself as an Interpol agent in “Thousand Eyes”, appearing yet again, just a year later, in reverse moral order, now as a warden’s assistant who, no surprise, turns out to be a henchman of our master criminal), the shadowy urban settings, inspired production design and effective recreations of earlier Lang/Mabuse set pieces (something Lang himself did across his own work with some regularity), such as having Lex Barker’s ostensible strong male hero stuck with his romantic interest, the insanely gorgeous Dahlia Lavi, forced to escape from what appears to be certain doom in a room filling with water, the spirit of the crazed cinematic master hung over the proceedings. It’s clear director Reinl and Artur Brauner (the innovative post-war producer who coaxed Lang back to Germany to bring the evil madman Mabuse out of mothballs in the first place) were doing their best to channel the pessimistic perspective of the creator of the cinematic Mabuse incarnation… and journeyman filmmaker Reinl was capable enough to adequately pull it off.

You have to be one really daft viewer not know who the mastermind behind the criminal syndicate that Lohmann is investigating is (it’s right there in the title of the film!) and how he’s doing it (gee, isn’t there something strange about that prison warden that Lohmann keeps finding the case leading back to waxing poetic about all those busts of master criminals he surrounds his office with?), but that’s not really the point. The fun of “Return” isn’t about uncovering who the bad guy is, but enjoying this unlikely franchise; a crazy, unique mishmash of genres following international character actors circling about a mostly hidden super criminal operating from behind the scenes – it’s crime, urban noir, romantic melodrama, this time with an added dash of scifi, as the mind control Mabuse exhibits over his uber-men is no longer supernatural but now accomplished through a super-drug developed by a mad doctor he has kidnapped and keeps captive in his prison. Even the eventual “Mabuse” reveal comes with a scifi tinge, with the theatrically presented unmasking of the titular villain (played again by the appropriately severe-featured Wolfgang Preiss introduced in “The Thousand Eyes”) playing out as an earlier, more primitive (though still very cool) run at of the celebrated multiple Tom Cruise’s Ethan Hunt Mission Impossible unmaskings almost 40 years later (if also naggingly ridiculous – I mean, how do those masks manage to change facial structure?). 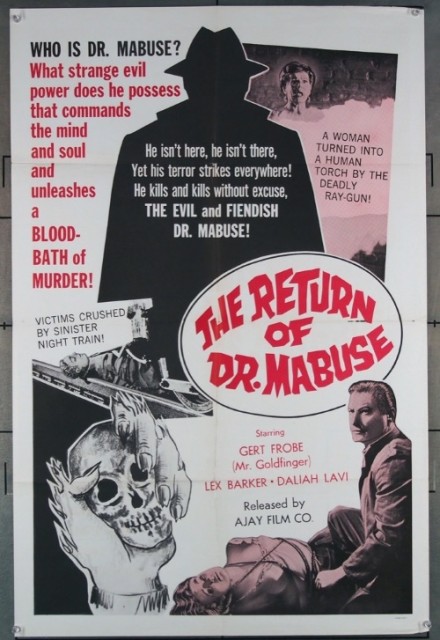 With moments such as a female member of the syndicate being burned alive by a flame thrower, the blind street vendor ‘witness’ silenced by crushing him graphically to death by a truck and a Mabuse henchman dissolved in a vat of acid, there’s a surprising — and welcome (for a lover of exploitation cinema like myself) – modern-leaning lurid quality to the violence, perhaps revealing the sensationalistic showman inclinations of producer Brauner no longer being hampered or beholden to the whims of the more mature art-house sensibility of Lang.

It may be a potboiler, a bit goofy at times, and certainly not aspiring to greatness (but rather effective competence), from the shadowy milieu of urban distrust and madness, to the surprisingly graphic violence and the shifting identity tropes elevated to steroid-level heights (with possibly the most absurd of all being the shady Lex Barker character revealed first as an FBI agent, then as a criminal operative pretending to be FBI agent, then as an FBI agent pretending to be a criminal liaison pretending to be an FBI agent), the easily overlooked excellent production design and colourful casting (including again, Lavi, the stunningly gorgeous Israeli model/actress who would soon be a major player in the wettest of my dreams, as the pure object of Christopher Lee’s sadistic desire in The Whip and the Body), it’s a film that if the misanthropic and egotistical Lang would have been honest about, he could have easily been proud to say he himself directed.