It’s New Year’s Eve, and, soon after the celebrated hour has hit, the passengers (well, the few who have survived) find their first task of the new year is to figure out how to scramble, stumble and swim their way out of the fiery, steamy and water-filling US Poseidon, after a massive tidal wave has hit just in time to bring in the new year, causing the entire ocean liner to capsize and slowly sink.

It was the 1970’s, the last Golden Age of Hollywood cinema, with the wild counterculture appeal of Easy Rider having rounded out the 60’s. It was the end of the censorial Hayes Code, replaced by a ratings system that started to feel like an anything goes taking on of subject matter barely dared broached before on American screens (as well as adding lots of nudity and shocking cuss words), leading to the rise of those brilliant, fired-up and rebellious, free-wheeling auteurs, like Ashby, Scorsese, Coppola, Friedkin, Schrader — informed by the social upheaval of the 60’s as well as being the first (and baddest of ass) modern ‘film school’ brats.

And yet… as emasculated and confused as those old Hollywood execs had to have felt in the face of all that vibrant, upstart youth… they were able to take at least some legitimate comfort:

Why, it was also the decade of the studio cash-cow assembly line product known as the disaster film. 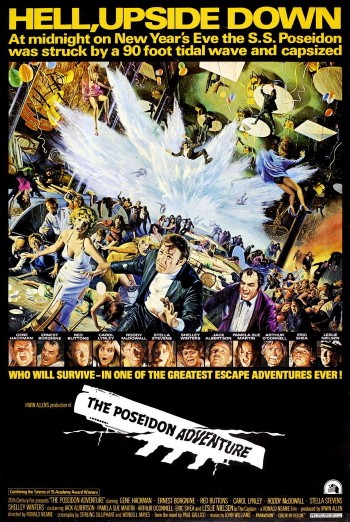 While the massive success of 1970’s Airport paved the way with its all-star ensemble cast, and was enjoyable enough (mustering up even a bit of dramatic heft… I mean, not too much – let’s not get crazy here – but enough to add a dusting of resonance to the goings-on), it was the next one, the first by the no-nonsense legend who would eventually become forever known as the ‘master of disaster’, producer Irwin Allen (because, unlike those pesky director-minded films, these disaster movies were nothing if not producer-driven vehicles), that really upped the ante… and while The Poseidon Adventure didn’t quite reach the initial box office of Airport (though it still was a huge financial success), it’s a superior film; I mean, to be fair, there’s a lot more you can do with an escape from the vast labyrinth of a sinking ocean liner (one that’s upside down no less, in the film’s first stroke of genius) than in the relatively confined space of the jumbo jet, but Poseidon‘s characters also operate on another level.

Okay. I’m not saying the film isn’t filled with a lot of silliness… it is… yet there is such a level of commitment from the actors (in their performances, as well as how they are clearly taking on a lot of the physical stunts themselves in what had to be one physically trying shoot for all involved – I mean, that moment of old man Jack Albert knocking his head into the steel rail has to have been a painfully captured mistake!), massively impressive (upside down) production design and one grand set piece after another — from the initial breathtaking ballroom sequence as the boat tips and the entire room gets buffeted about, leaving a desperate bunch left holding onto tables from the roof, slowly falling – with the one unforgettable poor shlub dropping into the massive ceiling light fixture now below — to the swimming sequence through flooded sections of the boat (perhaps the most tense sequence in the film), to the concluding segment with Gene Hackman’s Reverend Scott dangling precariously over the burning water working the valve to cut off the steam, it’s just one wonderfully conceived moment after another — and taut, straightforward story-telling (led by journeyman vet director Neame, who clearly has a handle on things) that sweep us along with excitement, it takes no effort at all to suspend belief, jump along and be awed by what’s coming. 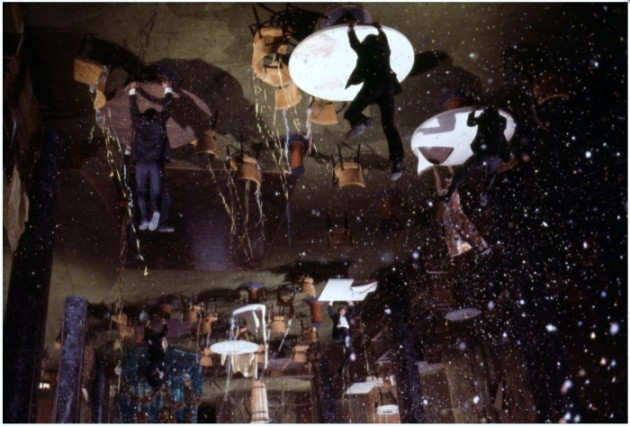 Like Citizen Kane may have been Orson Welles’ most epic film (bear with me here), it doesn’t necessarily mean that it was his most interesting or even best… and that applies with the golden age disaster films; The Towering Inferno may be the grand poobah in terms of sheer scale, Poseidon manages something wonderfully exciting in its own right, with its colorful and engaging mishmash cast of stars, of the types: current, veteran, fading and up-and-coming.

Hackman as the muscular-minded Reverend who, with his impassioned speeches on ‘God likes winners’, comes across as more an (overzealous) rah rah college football coach than a man of God, is a joy, in just how much he’s into the part. That loveable lug Ernest Borgnine playing a cop married to the ex-prostitute (Stella Stevens) he’s continuously arrested over the years, acting as Hackman’s main antagonist as they precariously bump and push through the maze of the ship, operates on the level of screaming the entire film and is perfect (as is Stevens). Then there’s the aforementioned Albert (he of the popular at the time television series “Chico and the Man”) and the ever boisterous Shelly Winters as the aging Jewish couple determined to get to Israel to finally get to see they’re grandchild (which, with a set-up like that, you just know isn’t gonna happen for at least one of them). 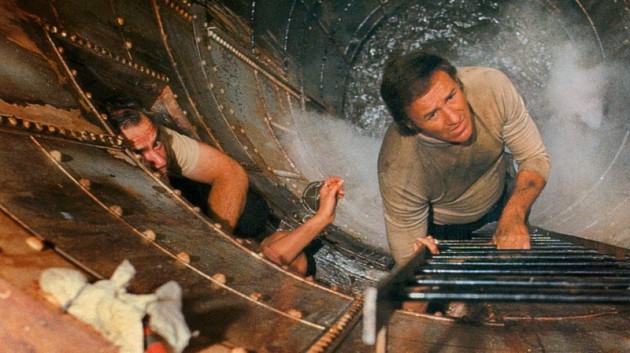 It’s a film sprung more from old Hollywood, so naturally it’s all about the preservation of those old school values (why, Hackman’s manly-man Rev is even rewarded with the deep crush of the sprightly hot 19 year old Pamela Sue Martin by the end for his strong leadership) but, eh, whatever. That’s part of its charm. Speaking of the young nubile Martin, its eye-rollingly funny as she and Stevens are told by the male leaders that there is no choice for them but to discard most of their clothes before getting on with their journey to escape (with the Rev amusingly straight out saying “You’re gonna have to take that dress off to climb”), but… I wasn’t complaining.

Fortunately there isn’t too much set-up to get us to the tidal wave and, anyway, what is there is far from a slog, helped along by the engaging performers (though I have no idea why the early subplot about the Greek executive on-board the ship forcing the disapproving Captain, played in serious mode by Leslie Nielsen, to tax the aging ship’s engines and drive the boat full-speed ahead, is there at all as it ultimately has nothing to do with the fate of the ship… perhaps guiding guru Allen felt the audience needed some kind of intrigue to stay fully invested, even if they were going to drop it entirely once the big cahuna wave hits – and, what’s amazing is, that you kinda do forget about it). The model of the ship itself simply gliding through the ocean in the early goings is also quite impressive.

Even more so than Airport, Poseidon manages some emotional resonance along the way as well. The scene of the Captain and crew on the deck watching, without a word, in saddened resolve as the wave is about to hit is a really nice moment, made even more potent with its silence. And that ending scene with the Rev… not only is Hackman just great, but he gets the type of unforgettable send-off any actor would love. 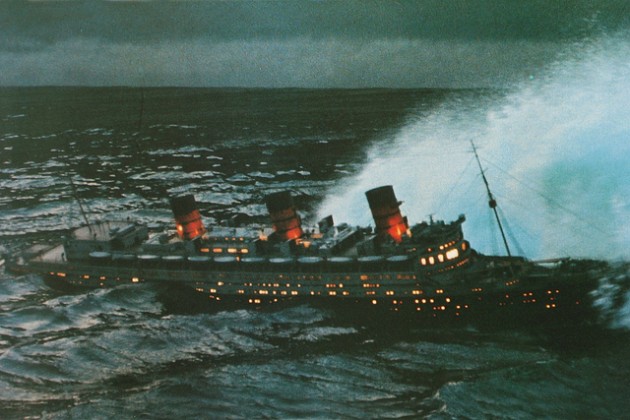 The Poseidon Adventure is a rollicking cinematic adventure, with unforgettable set-pieces and a grand ensemble of actors; it’s certainly a crown jewel of 70’s disaster films. Considering I had gone to see it on New Year’s Eve (having convinced a friend to join me for the adventure), it could have been the perfect way to bid adieu to the decade of the aughts… alas, unfortunately, it didn’t quite happen that way. Pre-midnight hour, we stuck around… and went Beyond… Yeesh. Not as good of an idea.