This whole coronavirus thing might have made a muck of things, but — putting aside for the moment the 40 million plus now unemployed in the States, the continuing massive small business closures leading to the gobbling up of every last bit of independent wealth left by the greedy elites in one of the most far-reaching and devastating ‘shock doctrine’ grabs in world history, and the panic-peddling mainstream media momentarily sidetracking Cold War-style red-baiting Russia hysteria to push virus terror from every conceivable angle, including the horrors of covid toes and asymptomatic carriers possibly being everywhere (just like old school commies were in the 50’s!) – on the plus side? What can I say? It hasn’t been so bad. Why along with giving me a little downtime to assess lots of things in my life (such as do I really need so many easily-frightened-into-conformity-and-shaming-others friends?), it’s even granted me some extra time to catch up on some off-the-grid books and movies I’ve always had in my mind to get to, but not sure would have ever made the list… such as, in this case, The Outsiders.

The early 80’s had found director Coppola emerging from his brilliant cinematic run from the previous decade – that glorious time of those daring New Hollywood filmmakers (a period which Coppola himself would provide one of the showiest of codas for, with his tripped-out, maniacal war movie, the 1979 Apocalypse Now) – and now floundering a bit, not quite reconnecting, either commercially or critically, or sometimes both, with the audience and critics, both who had adored him previously. I myself, a huge Coppola fan, remember losing track of him in the 80’s (I still haven’t seen most of his films from that era, in fact, only recently seeing the gorgeous, interestingly flawed One From the Heart, the disastrous commercial flop that got the decade off on the wrong foot for him), so when I recently noticed the modern classic S.E. Hinton book The Outsiders sitting up there on my ex-wife’s shelf, I took it as serendipity, swiped it… and plunged right in (don’t worry, I’ll return it… maybe).

I don’t know what I was really expecting, but after reading it (quickly, as — with its dime-store paperback size, fairly large font and padding with things like a current interview with Hinton — it barely reaches novel-length), I realized it wasn’t hard to understand the splash this coming-of-age tale made upon its best-selling publication in in 1967, as it remains a fairly vibrant and poignant read even today, made even more so by the fact that Hinton was only 16 when she had finished writing it.

Told in the first person by early teen Ponyboy Curtis (and that’s not a nickname… he even has a brother, he proudly states, whose birth name is Sodapop) recounting the tumultuous life-changing events that occurred to him and his fellow delinquent and poor ‘greasers’ over a series of days, which allows the bright and aspiring (if oft distracted) writer to colorfully bring to life the painful, frequently dangerous world they inhabit (never explicitly stated as in Oklahoma, but that’s where Hinton is from and it feels a lot like that dusty small town life) — not just because of the standard pitfalls of high school life that most of us know, but with the added burden of endless gang-fights, tension with the upper-class (though equally as troubled, as the thoughtfully aware Ponyboy will come to realize) kids of the town (known as the ‘socs’) and the domestically troubled homelives of so many of those living on the wrong side of the tracks (with Ponyboy’s parents having died in a tragic car accident, and him being raised by his two brothers, the oldest being Daryl, who he hates, and thinks hates him) have to endure, The Outsiders, with the straightforward, no-nonsense writing perspective of its young narrator, with him revealing so much more than he realizes, captures a poetic feel of astonishing truthfulness (with the fact that it’s a sixteen year old girl behind the voice likely adding just that right dash of additional sensitivity); it’s a beautiful – and tragic – read, with the clever elliptical approach of the final narration a perfectly conceived hopeful note to end (and begin) on.

And what can I say? I also love the fact it opens/closes on Ponyboy sauntering out of a day matinee, squinting at the sun, with Paul Newman on his mind (something the deeply nostalgic-minded film adds further to, showing the film on the marquee that Ponyboy comes out under as Robert Rossen’s The Hustler).

Speaking of the film, I always had it in my mind that Coppola’s version was a more-or-less no-frills cinematically straightforward adaption of the book, with its main selling point the almost-hard-to-fathom-it-was-assembled-cast of young actors either iconic to the decade (including 80’s bratt packers Emilio Estevez and Rob Lowe, C. Thomas Howell, Ralph Macchio, Matt Dillon, Patrick Swayze, Diane Lane), on the cusp of exploding into the Hollywood blockbuster stratosphere (that being that wackiest of scientologists, occasionally found on talk shows laughing hysterically like a fucking maniac, Tom Cruise), or already a pop music super-star (Leif Garrett, with no sign yet of the spiral into bankruptcy, drug addiction and inevitable appearance on “Celebrity Rehab” that he was headed for), with the director’s follow-up film, Rumble Fish, released the same year (which I also haven’t seen) being the truly cinematically adventuresome one (shot in black and white, a supposed homage to German expressionism) of the two Hinton adaptations he’d take on simultaneously. 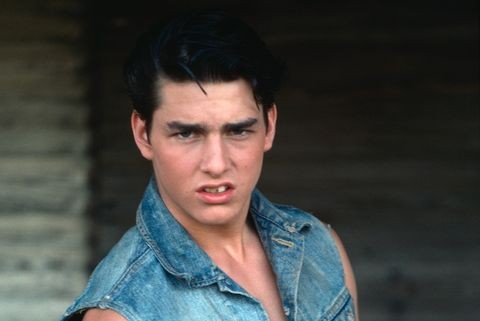 So what an unexpected surprise to find that while, yes, that cast is certainly something special (adding in, I discovered, welcome cameos from a coupla old-school presences — the beloved gravelly-voiced, Beatnik-style singer Tom Waits and tough guy vet of many a wild action exploitation film William Smith), the aesthetic of the film is an entirely stylized construction; the deliberately artificial Hollywood-ized sunset skies, deeply nostalgic sensibility, occasionally off-kilter camera angles and 50’s musical soundtrack riffs show Coppola to be far closer to the intellectual artistic musings and colorful experimentations of his previous film One from the Heart than I had anticipated.

And while Coppola’s adaptation is extremely faithful to the novel — certainly the 2005 re-release that I watched is, which added back in a bunch of scenes the director was forced to cut from the original 1983 release (with the director’s continued re-cutting and re-releasing of his films a kinda cottage industry of its own, including Apocalypse Now: Redux and The Cotton Club: The Director’s Cut – with The Outsiders getting the most unique re-release subheading of The Complete Novel) — what I found most intriguing is just how the director’s artistic direction doesn’t quite mesh with Hinton’s much more intimate, simple storytelling (and dialogue, as the film uses lots of passages straight out of the book). It’s an oddball film, that’s for sure, making it certainly intriguing to watch, but I wonder if Coppola’s formalistic approach (with the film operating as a kind of nostalgic fairy tale, taking Robert Frost’s “Nothing Gold Can Stay” that is recited poignantly in the book as a kind of literal hue throughout much of the film) wasn’t the very thing that led to its lukewarm reception at both the box office and by critics.

It’s a pleasure to watch all the familiar faces (with 18 year old Lane already gob-smacking classically gorgeous and sexy, and Macchio surprisingly – I didn’t know he had it in him! — really standing out as greaser kid Johnny Boy, helping to capture some genuine poignancy in his character’s eventual tragic fate), but a surprise stand-out was the much lesser well known Glenn Withrow, who may be barely in the film as Tim Shepard, the rival leader of another local greaser gang (a character that I enjoyed see used by Hinton again, as was Ponyboy Curtis, as supporting characters in her follow-up book, That Was Then, This Is Now that I’m currently reading… and will follow up with a viewing of the film adaptation as well) but every time he does show up, with a look reminiscent of an old school Lawrence Tierney, he adds a decided sense of street toughness to all these Hollywood actors pretending at bad ass. 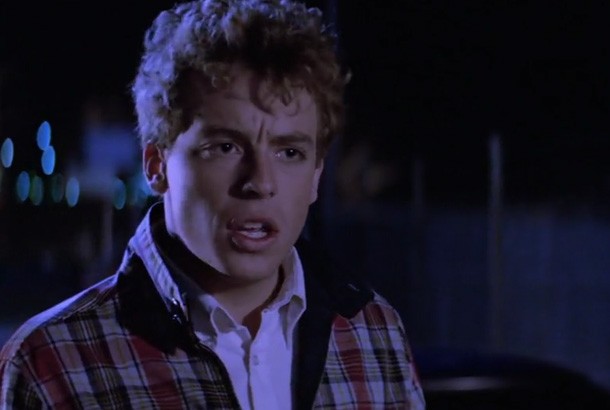 As with One From the Heart, it’s an impressive film… it’s just that it’s more from the intellectual, experimenter side of Coppola, than from the filmmaker with the epic grand vision wildly determined to create myth; it makes me wonder that if Coppola, so burned by the excesses and pouring of his soul into his 70’s masterpieces (which includes such modern classics as the two “Godfather” films, The Conversation, Apocalypse Now … and the film he executive produced, the stunningly gorgeous The Black Stallion), to protect himself, decided (consciously or not) to revert to the perspectives of his earlier, more insular films; films that were fascinating, but distancing – like The Rain People and even Dementia 13; aesthetically interesting films, with great cinematic touches, but perhaps less personal. And it’s a style that doesn’t quite mesh with what Hinton has to offer with her book.

It manages to render the three-way crying hug session between the brothers Curtis (Ponyboy, Sodapop and Daryl) – that happens twice no less (I wonder if they hadn’t wisely cut at least one of them in the initial theatrical cut of the film) – the kind of thing that actors, always desperate to show their lovable side, gravitate towards (and it takes a firm director to say ‘Uh… no…”) – as entirely hokey and over-sentimental. It’s the type of moment that plays well enough in the book, as Ponyboy’s matter-of-fact simple perspective helps ground it, in the film… ooh, boy. Not so good.