An unstable British police officer (Sean Connery) goes (way) off the deep(est) end while interrogating a child molester and spends the rest of the film rationalizing the behaviour that’s leading him deeper and deeper into a dark hole of rage and nihilistic despair.

Whoa. So we have the iconic 007 himself, at the peak of his Hollywood power and desirability — with the replacement James Bond George Lazenby having just proven himself to be a bit of a tepid dud of a replacement in the first Bond film without Connery, On Her Majesty’s Secret Service (which Lazenby may not be great in, but still remains a standout Bond entry) and the studio United Artists desperate to woo him back to the debonair role at all cost – who instead decides to take a turn into this unrelentingly grim territory playing a character, Detective Sergeant Johnson, so blighted by misanthropic rage, with lurid images from horrific past events swirling in his head, it has left him with little sunshine and a lot of destructive hate. The scenes of the miserable police officer at home harshly berating his desperate wife are almost unwatchable in their harshness. 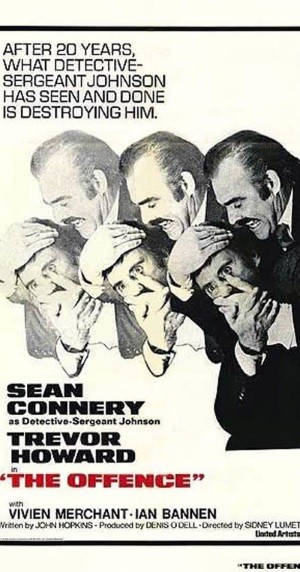 Director Lumet may be playing in that familiar sandbox defined by morally tainted cops & criminals, but of all the films of his I’ve seen, this one is by far his darkest and most despairing. He’s done films based on stage plays before, including Equus, but where with that film he never quite managed to elevate it above its chamber piece and dialogue-driven trappings (though I still find it a fascinating, if flawed, work), with The Offence, the creative strength of his directing and the powerful British performers (with Connery leading the way) make it a profoundly cinematic work. While Lumet is often recognized for certain subject matter, I’ve never thought of him as having a particularly signature stylistic approach, which is probably the main reason he’s never been placed in that ‘auteur’ category with 70s filmmaker contemporaries like Scorsese and DePalma. Though he made some great films that defined that decade, he was quite a bit older than them and really came of age in a different era, during the time of Old Hollywood and not the more aggressively individualistic (and petulant) New Left Hollywood that followed. Lumet’s approach (similar to most old Hollywood iconic figures like Ford and Hawks, for instance) was to present themes and ideas through storytelling, with the cinematic tools at hand used to formalistically present that subject matter as effectively as possible, with little attachment to self. He reminds me a bit of filmmaker Robert Wise (only better, though Wise is still pretty tops), a filmmaker who is a brilliant craftsman, able to approach any topic or genre with an objective eye and little obsessive desire (or need) to channel any personal expression.

Lumet brilliantly creates an almost spiralling effect, with droned out sound, something akin to a horror film, in the recurring horrific frozen-in-time moment Johnson snaps during the interrogation, while at other times evokes something closer to a harrowing 60’s British kitchen sink drama. No surprise in discovering the only reason it got made was United Artists pledged to let Connery chose any two film projects he wanted within a certain budget in return for returning as Bond again in Diamonds Are Forever. Of course, it tanked at the box office and, after this blotch of total darkness, I guess UA figured out a way to ix-nay that second project… and the studios made damn sure Connery never presented such an uncompromisingly and unremittingly grim of a face ever again to the public. Too bad for us, but kudos to Connery for showing it to us once at least.