I owe an apology to Haven. I’ve been increasingly slagging in my write-ups on that supernatural wannabe “X-files” (occasionally-cross-“Buffy”) series with growing fervor over each of its seasons (I’m through Season Four, though have been avoiding jumping back into the fifth one – thankfully it’s the last, but it also has double the number of episodes for some reason!), as while it was a show with a decent amount of supernatural Lovecraft New England town promise, it’s been heavily ‘mediocritized’ (as we all know, a fate far worse than being awful), in the particularly Canadian-production kinda way, with its generally okay if second-rate performers all in way over their heads in the depth department (as well as pretty bad when it comes to comic timing) and showrunners satisfied with the most do-gooder and surface of characterizations (because everyone’s a self-sacrificing hero… you know… just like in real life… NOT), and, worse, this last season was bereft even a single stand-out episode to celebrate (which of the three previous had at least one of).

I mean I thought it was bad. Thought. That is, until I watched this ‘reimagining’ of the classic ahead-of-its-time “X-files” monster-of-the-week show (and the original 60’s “Outer Limits doesn’t count, Monsieur Offscreen editor Donato! That was an anthology show!), The Night Stalker (with the first two boffo ratings-bonanza Dan Curtis-produced TV movies being great and the single mid-70’s season show that ensued still memorable for its pioneering genre conceit, despite its absurdly repetitive nature, and the increasingly cheap monster makeups) and realized I had no idea what television series bad is until I caught up with this. [Agree. PS: You have my sympathies for surviving this one. ed.]

Taking one of the most indelible characters in modern television history – that of shifty, old-school city-hustling (while forever draped in incongruous pork pie hat and seersucker suit) independent wire service reporter Cal Kolchak, a role inhabited with great opportunistic relish and charm by Darren McGavin, playing one of those characters it was clear the Gods meant him to play (right up there with Carol O’Connor as Archie Bunker… though O’Conner was such a great actor he did manage to create some after-Bunker tv-life as southern Sheriff Gillespie on the long-running In the Heat of the Night show) – and wilting him down into this dour, personality-less plank played by the nondescript, LA-vacuous Stuart Townsend is just the first of a landslide of irredeemable decisions made by the showrunners.

One of the larger problems with the original show, a fatal flaw that ultimately killed its original run, something recognized and resolved by the supernatural series that openly took up its mantle, like The X-Files (with the black oil conspiracy) and _Supernatural (with I don’t know what as I haven’t seen the show but others have told me it has one), was the lack of an overall series arch to help explain the continuing weekly monster-driven goings-on. It needed a “Buffy”-like Hellmouth (that being the demon-attracting other-dimensional portal that happens to reside directly beneath Sunnydale High School); a catalyst for its audience to accept our intrepid reporter’s continuous running into a new monster each week, rather than it being mere (harder-and-harder-to-believe) coincidence. And while the new show brings one, revolving around the reasons for the ‘enigmatic’ (note the quotes) Kolchak always obsessively trying to find monsters is as a search for clues to help unravel the mysterious, possibly-supernaturally-linked murder of his wife (that he was once held under suspicion for, and an angry FBI agent, and once best friend of Kolchak, is still on him about, even though — come on! — we all know Kolchak didn’t do it), like the entire show, it’s got no juice or sense of inspiration. In fact, the show was cancelled before it was ever resolved and not only don’t I care… I don’t even really remember the details of the whole thing…

Exec producer Frank Spotnitz clearly tried to bring some of his previous X-Files magic into the show by introducing a female partner, and some attempted sexual tension, pairing his supernatural-believing Mulder with a Scully skeptic, namely his new boss, Perri Reed, the head crime reporter of the L.A. Beacon (which has somehow defied all the odds, in the time of no one reading newspapers anymore, by not only sporting gorgeous Wall Street-style offices over-looking the downtown skyline, but seemingly providing reporter salaries that allow both Mulder and Scully – sorry, I mean Kolchak and Reed – to have celebrity-style Hollywood Hills style apartments that allow for endless slick, yet entirely empty shots of each standing pensively before floor-to-wall windows reflecting the LA traffic far below). Alas, Gabriel Union, while certainly more attractive and perky that Townsend, is impossible to believe as a reporter who had to fight her way to the top as it is to believe Townsend actually has any emotional turmoil going on inside whatsoever. 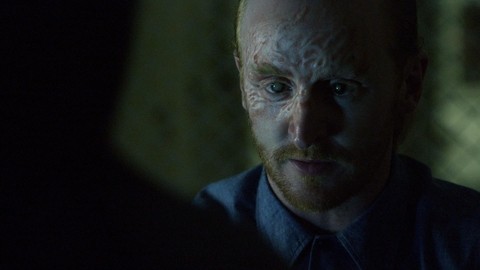 The great and ever-loyal-to-a-fault (despite any real rational reason) Vincenzo of the original, played by the wonderful Simon Oakland, constantly trying with great frustration to get his seemingly wild-goose-chasin’ reporter out-of-trouble (while usually managing only to dig himself in deep right next to him) is reimagined as a completely forgettable nothing of a character, played by an actor who I can’t remember (if they put a police lineup in front of me and demanded ‘Tell us – NOW!! — who played Vincenzo in the “Night Stalker” re-boot?’, I don’t think I could do it).

Worse yet, it’s a new show, which means you got all sorts of audience expectations of at least seeing some cool monster stuff (and at least a juicy body shredding scene or two) and yet… it’s a little stale in that department as well. There’s the uninspired television lighting (with everyone unaccountably trying to read and work under the by now de rigueur underlit surroundings).

There’s no inspiration. The show clearly isn’t driven by anyone with a deep (or any, for that matter) desire to say something within this genre Universe, or driven to bring something new to the beloved (at least by important fans in the know, as well as influential creators like Chris “X-Files” Carter or Joss “Buffy” Whedon) “Kolchak” Mythos. It’s got the feel of product, made because some execs had the rights to it. Thankfully, it was cancelled after a short ten episode run that was barely noticed (as with the single season deplorable mediocrity known as Damien I watched as part of my “Omen” films retrospective, I would likely have never had any idea this new “Stalker” series even existed if I hadn’t been doing a Kolchak retro… and that’s a good thing, showing occasionally the audience gets it right).

The eventually impossible-to-endure opening and closing segments of each episode of the re-boot is all you need to understand just how far things had moved from the colorful street-smart, un-pretentious and personality-driven fun of the original show, represented best by the lovable Kolchak himself, into sheer empty mundanity, with slick empty surface doing its best to pretend at profundity; each of these segments is a montage of car advertisement-style shots of LA streets at night, as Townsend’s Kolchak delivers, in monotone, the most banal monologues one can imagine on the ‘nature of evil’ (with certain words he says laughably fading up and down on the screen – ‘dying’, ‘joy’, unknown’). It’s nothing.

In comparison, it almost makes me pine for the simpler experience of Haven. I mean, those actors may be second-rate over there, the show more than a bit do-gooder dopy, but at least it’s not pretentious about it. Why, I think I kinda might even like them now. That is, I’m sure, until I start actually getting around to watching Season Five.