A never-seen documentary crew (ala, “The Office” style) films the Muppets dealing with the chaotic pressures, professionally and personally, of producing the fictional LA-set late-night talk show “Up Late with Miss Piggy”, hosted by the diva extraordinaire female muppet pig herself, show-run by her former green muppet love Kermit and overseen by always smiling, opportunistic and backstabbing minions of the network executives.

While I can’t say I’ve rushed out to catch all the spin-off movies over the years, or even really noticed the later incarnation of the show in the mid-90’s, I do have over-riding fond memories of that first inspired emergence from yesteryear of the “The Muppets”, lasting for 5 years (from 1975-1979, smack in the center of my formative, right-at-the-cusp-of-adolescence years), springing forth, in clever and original fashion, from one brilliant Jim Henson, as a variety show (in prime time, which allowed a slight, yet satisfying, smattering of an anti-authoritarian attitude) with the fun weekly appearance of a then-familiar and talented sitcom star, such as “Carol Burnett Show” regular Harvey Korman or a Don Knotts, and a timely – if always family-friendly — musical performer, like a John Denver, joining the puppet crew for some amusing comedy sketches (which ran a wide gamut, from the likes of vaudevillian-style, to absurdist, to physical slapstick), or a song-and-dance number, with each show ending on my favorite bit — namely, those two old geezers up in their balcony box yucking it up, relentlessly heckling the show. 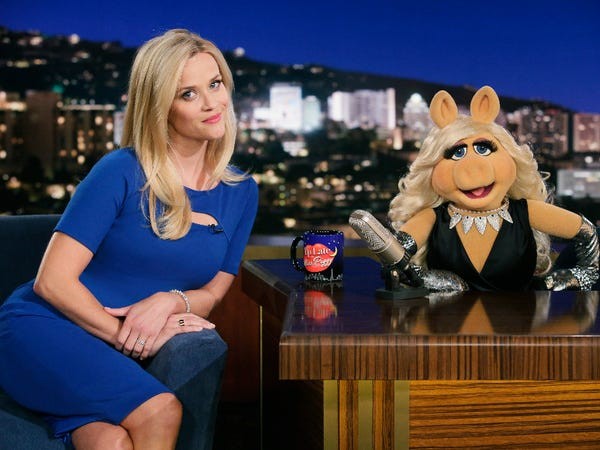 From straight man – er, muppet — Kermit, to his long-time romantic interest, the temperamental and crazed narcissist Miss Piggy (who obsessively tries to undermine every single female guest she has on her show – not exactly a characterization straight out of the #metoo generation, but a true one, so I like it!), the naïve, comically-challenged Fozzie Bear, and on to absent-minded scientist Bunsen whose awry experiments often lead to his bulging-eyed, squeak voiced assistant Beaker paying the price, as well as the clearly drug-addled (with no one stating the obvious) house band Dr. Teeth and the Electric Mayhem, with drummer Animal, that figure of pure crazed libido, and flower child guitarist Janice (and we’ve only touched the furry tip of the iceberg with those), Henson molded an entire original cast of masterful puppet creations that burrowed almost immediately into the pop culture zeitgeist, where they have remained ever since.

While this latest muppets revival may take matters further into the mature sphere — with things like Fozzie dealing with an awkward sex life with his new human girlfriend, those street comics, the Latin huckster Pepe the King Prawn and brown rat Rizzo, frequently making moves on every female they see (and usually providing the most laugh-out-loud, if culturally insensitive, moments) and Miss Piggy constantly slugging back food and being entirely impossible with everyone around her as her (clearly flaming gay muppet) wardrobe supervisor struggles to keep her calm – it’s not like we’ve suddenly walked into the drug-riddled, suicidal and sexually perverse land of Meet the Feebles or something (no matter what that overly sensitive group of outraged protesters calling themselves One Million Moms thought, that only led to the show amusingly mocking them as the One Million Angry Parents Association, self-named though led by a mere three protestors, angry that Miss Piggy mistakenly showed her tail on air after a wardrobe malfunction). 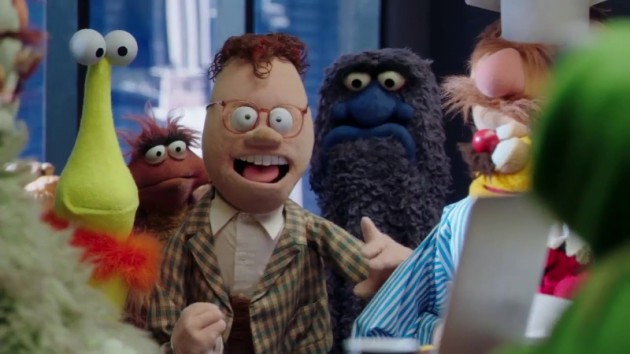 I’m not much for the show spending a lazy five of its short 20 plus minutes on a usually lame musical number each week (especially as some of the performers are as forgettable as Pentatonix and Echosmith, or just slumming like Dave Grohl… at least Jack White’s appearance in the finale comes with a narrative reason, singing “You Are the Sunshine of My Life” as a bid by Kermit to win back Piggy), and while ‘the muppets’ humor around the turmoil that arises from running the show (with the horrible opportunistic ‘human’ network pawns always lurking about waiting to take the show down) isn’t all that daring, novel or trenchant (in fact, it’s often status quo-upholding), it’s always been the simple pleasures of following the vast array of characters that Henson and his co-horts magically brought to life (right away I think of the recurring bit of the uptight, blue in color (for some reason) Sam Eagle, the show’s arbiter for good conservative values, finding himself painfully smitten with cutie musician muppet Janice, the happy-go-lucky-if-kinda-ditsy flower child, who he keeps finding himself in one perfect moment after another with her to make a move – such as happening together under a hanging mistletoe in the office with her seemingly totally willing – only to freeze every time, which I find tremendously amusing each time it happens).

Truth be told, I’m glad it only lasted a season, as one is more than enough for a revisit (I’ll be ready when they’ll likely try again in a few years). While creator Henson saved the real dark material for his puppet-animated movie The Dark Crystal and Labyrinth, with his muppets, it’s all about the enjoyment of spending time revisiting these indelible creations, with their personalities, and their banter, worth coming back to.

Oh, and seeing the soulful, slightly melancholic Rowlf, always my favorite of all the original muppets (and that includes the considerable soft spot I have for those two near-deaf geriatric guys, now moved out of their box to the front row, still trading barbs), having transplanted his blues and classic piano-playing skills from the show to his own smoky whiskey bar (named Rowlf’s, naturally) across the street from the LA set, where many an episode ends, with the exhausted muppets crew recovering from the day’s mania over a drink or two, is a nice sight to see. 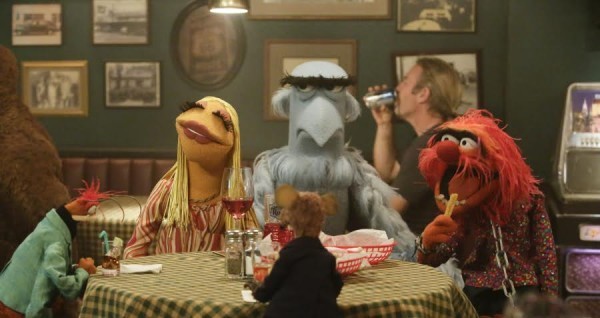 It’s been said that the personality of the late Jim Henson was most like Rowlf’s. If that’s so, he was a pretty cool dog… along with being a genius, that is.