The Little Girl Who Lives Down the Lane (Nicolas Gessner, 1976)

After the jarring, entirely surprising midnight experience of the reactionary and brutally violent (thought not entirely unpleasurable for its sheer and shameless audaciousness) conclusion to what had been up to that point a relatively innocuous Italian softcore sex romp titled To Be Twenty the night before, it was time to return to the quieter, creepier perversity of this odd little product of that relatively short lived but incredibly important period of the Canadian tax shelter system that ran mostly from the late 70’s into the early 80’s and not only arguably led to the largest number of interesting Canadian cinematic works of any time period, but certainly to the most sensationalistic and important genre output the country’s ever seen since.

Playing the little girl of the title, this was the by far lesser known of the films the 14-year-old Jodie Foster made that year (which included much higher profile efforts Taxi Driver, Bugsy Malone and Freaky Friday) and it’s not surprising, considering how uncomfortable and unsettling a film it is, dealing as it does with 13 year old Rynn (Foster) having newly moved into a small rural town supposedly with her famous poet father (who mysteriously is never seen, even as the girl makes a cake for herself, including candles on top, to celebrate her birthday downstairs) as she fends off not only a nosy local real estate agent and the kind, yet suspicious policeman who both want to know exactly what this bright, yet odd and arrogant girl is up to and where exactly her father is, but also the much more troubling intrusions and openly sexual advances of local psychopath Frank (Martin Sheen). 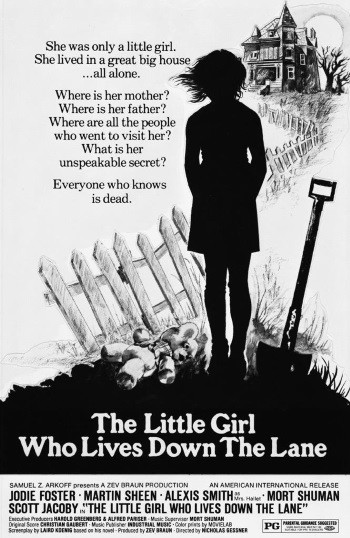 The 70’s for me defined the best of Martin Sheen’s long impressive body of work and it continues here, with him playing the very scary Frank, a character carrying a past filed with countless statutory rape accusations dismissed because of his family connections, that the town reluctantly still allows to run around wild, unfettered and unapologetic, culminating in a moment where he displays his menace to the Foster character by doing something particularly nasty to her pet hamster (the one moment of this film that I saw on television when I was a youngster that permanently scarred itself into my memory).

Rynn also begins a genuine friendship with a 16 year old wannabe magician and emotionally simple boy (who happens to also be the policeman’s son) that eventually turns into a nice romantic entanglement (if somewhat unsettling for the time, as again she’s only 13 in the film – though then again I guess no more disturbing than her role as a prostitute in Taxi Driver who in one scene lists in graphic details all her sexual do’s and don’ts) before developing into an increasingly darker collusion as he helps her protect her secrets.

Another tip of the hat to a tax shelter system that often enabled a lot of greedy hustling rich folk looking to preserve a buck and yet unexpectedly led to a slew of weirdo gems like this one.