A chance late night encounter in Central Park leads Irish scalawag Michael O’Hara (Orson Welles, hamming up the brogue to the nth degree) to save from street thugs, then fall head over heels for, one of the crème de la crèmes of femmes fatale – namely, blonde-quaffed Rita Hayworth’s Mrs Bannister (who Welles, ironically, was actually in the middle of a painful divorce from), a kept woman of famed crippled criminal defense attorney Arthur Bannister (played by one of the real greats of the Welles theater acting troupe, Everett Sloane), leading the initially-resistant (due to correctly sniffing trouble a mile away), down-on-his-luck seaman to allow himself to be convinced by the desperately lonely Mrs. Bannister (not much of a hard sell, that) to sail the troubled couple on the rich man’s yacht from New York to San Francisco, through the Panama Canal, joined by Bannister’s partner, the clearly insane Grisby (a wild-eyed Glenn Anders, so unforgettable I looked him up to see what else I’ve seen this familiar face in… only to realize this is it), which all leads – not all that surprising (as any fan of film noir knows, it’s in the telling, not the tale) — to an exotic journey, fueled by dangerous desire, darkly festering secrets and resentments, proposals of murder, double crosses, an almost broadly comic court-room melodrama, finishing up with the much-ballyhooed (for good reason) funhouse shoot-‘em up in the Hall of Mirrors sequence. 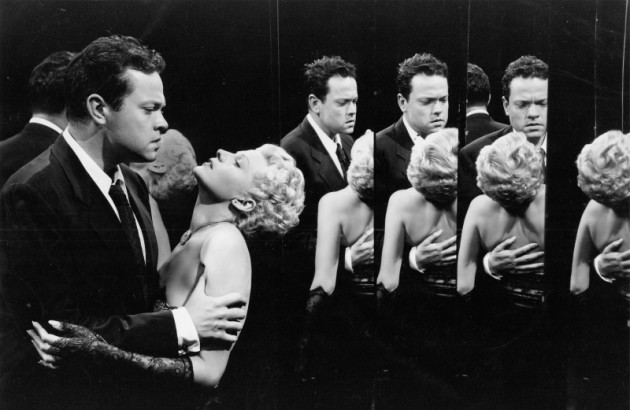 Orson Welles is usually my go-to when queried on favorite filmmaker of all time. I mean if it’s a geographically non-specific question, which opens the field to the vast international filmmaking array (even with my admittedly rather underwhelming knowledge of Asian cinema – I know, I know – xenophobe! racist!), I may occasionally switch my passionate proclamation over to, say, Bergman (‘how I love thee’) or Tarkovsky (‘let me count the ways’)… but if you say American filmmaker? Welles. Unquestionably.

His is a filmmaking (especially the later stuff) that speaks to that of a savant – deeply skillful, with a mature sense of cinematic storytelling, but told with the over-exuberant indulgence and showy flourishes of a sometimes petulant child playing with – and often deliberately smashing – his toys… and with his budgets dwindling significantly after all the woeful studio bridge-burning and destructive shenanigans of his first two budget-bursting masterpieces out of the gate (yes, I agree with the consensus – Welles’ Citizen Kane is the greatest film the Western Hemisphere has ever produced – and while his follow-up, The Magnificent Ambersons might be lesser – almost assuredly due to major studio meddling – what is there is pretty… well… magnificent), with both tanking at the box office for various reasons (if recognized as brilliant today), man, does the Welles ride get wilder and crazier.

Welles did manage to dredge up the chance at directing a third studio film, his first noir, The Stranger, in 1947, which, while having a worthwhile Hitchcockian flavor, including its small Americana town setting where evil hides (ala, Shadow of a Doubt) and a marvelous suspense set-piece (with our main sparring partners – good cop Edward G. Robinson versus evil Nazi Orson Welles – playing around with another iffy accent — duking it out precipitously high up on the ledge of a magnificently ornate clock tower) a finale right there in terms of sheer cinematic inventiveness with the best that that far-more celebrated squat director with the roly-poly profile is rightly celebrated for, is still much more formulaic (and even reactionary, springing as it did from the nationalistic, propaganda-pushing, post-war studio efforts of the time) than his previous breathtaking and classic visions… and far less adventuresome than the more kinetic, inspired and playful stuff that would soon follow. 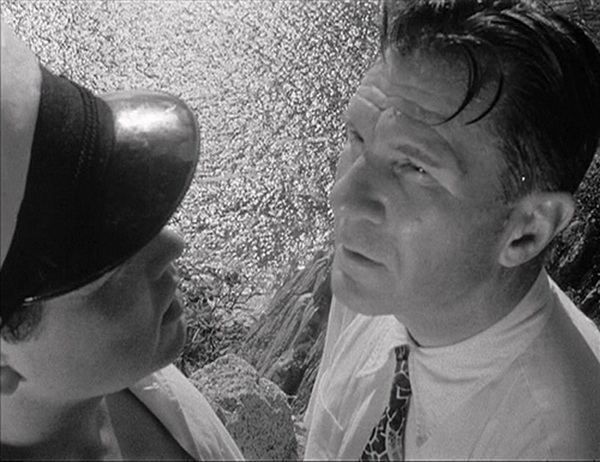 Fortunately, the good box office results for The Stranger (the only financial success of his career) didn’t lead to Welles’ studio-accommodating ways on that one to last very long, as his next began the far more satisfying movement into cinematic flourishes, indulgences and way-ahead-of-its-time experimentations that would define the rest of his drastically under-celebrated (at the time anyway – thankfully, that’s been rectified since his death) gypsy-like life and career.

Welles practiced as a magician, referring to that craft as having a ‘kind of second-rate poetry which I fancy and an innocence which appeals to me’, and I’d argue he’s capturing a portrait of his own later works (of course, there’s also the conman aspect to the magician, of which the longer I’m on this planet the more I realize many of the great filmmakers intrinsically have – including Welles — the better to seduce investors and audiences alike, naturally). And with the extreme and weirdly-cloistered close-ups suddenly switching to overly-grandiose beauty shots of Hayworth frolicking about in a bathing suit on the island rocks (studio mandated shots or not, it plays as strikingly peculiar), deliberately broad characterizations (with Grisby’s gleeful taunting of O’Hara with ‘a little… taaaaar-get practice’ being the most deliciously repeatable – and memorable – refrain from the film) and bold set-pieces (the aforementioned funhouse sequence with its hall of mirrors, the aquarium scene in which the background aquatic life in the background – blown up to a scale that makes no literal sense — begins to overwhelm the silhouettes of our embracing tortured, barely-secret lovers, O’Hara and Mrs. Bannister), The Lady from Shanghai was his opening salvo into oft self-aware and amusing (or perhaps amused?) experimentation.

While I wouldn’t argue against the general perception that “Shanghai” is not one of the Welles greats (like I would, say, for another of his later noir films, Mr Arkadin – or at the least the cut of that film that is closest to a director’s cut — with the herculean technical/temporal/geographical disjunctions he was in constant battle against – along with his massively expanding waistline — being, by that point, as much a part of his radical, quasi-absurdist, and definitively brilliant stylistic approach than was his own playfully audacious nature), the film is imbued with many an inspired Welles-ian touch and conceit. In fact, while it may drape all coherently together, it plays as one inspired and indulgently enjoyable scene after another (along with Welles occasionally revealing his leftist heart, making sure the presence of the poor native inhabitants of each island the yacht stops at is pronounced). It’s loaded – like many of the even lesser noirs of that time — with great gallows-style dialogue, even if some of it just sounds pleasing… without having much actual meaning (I’d love someone to explain to me what the recurring line about ‘One who follows his nature keeps his original nature in the end’ not only means, but what it has to do with this narrative).

The Lady from Shanghai is Welles not just making his first noir, but providing a kind of playful, visually-verbose commentary; it’s a deliberately-outsized construction of the iconography of a noir film. The crippled Bannister struggling about in leg braces (something Welles plays with to great effect all throughout, such as introducing the character’s presence in the dark mirror funhouse room, hobbling from out of the shadows, damaged legs first). Grisby, and the other thugs, in constant sweaty close-up, shot from angles accenting their monstrousness. It’s Welles taking the inner sickness and corruption – the greed, the envy, the pettiness — and transporting it onto the surface, into literal disease. 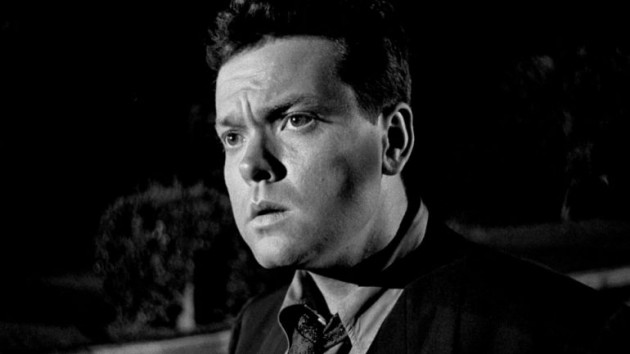 Like the large mocking presence of the aquarium creatures, or a barely coherent O’Hara swirling out of control down a twisting slide into the depths of the mad funhouse, it’s the noir world as visual nightmare (and comic one as well, such as in the absurd court room scenes, played with an openly mocking style).

It’s film noir as Carnival of the Grotesque. Welles – as the experimenter — directs it from a distance, as an indulgent experience to observe, rather than to emotionally connect to (explaining why it might be that the film doesn’t resonate as deep as it should, or could have).

Welles does manage, however, something considerably powerful to conclude with (no better place than the finish!) in the last desperate moments of the dying Mrs. Bannister; crawling from the shattered carnage of the funhouse, lying exposed for who she is, with all her helpless and tragic yearnings revealed, she is granted a last final confession of her sins to the battered and bruised O’Hara. Now, a part of it might be the ethereal quality of the obvious ADR (with this strange otherworldly sense a part of many a Welles’ film, forced as he often was do re-dub due to production necessity – even sometimes disguising his own voice for other characters throughout – and not so subtly, either – just another of the many self-aware ‘second-rate’ peculiarities of a Welles joint), but in this final scene, wrapped as it is in the baggage of the genre, with her sudden emotional nakedness (and her terror) on display for us to see, she suddenly emerges as an iconic figure; a martyr for the entirety of the Femme Fatales of Noir Past. 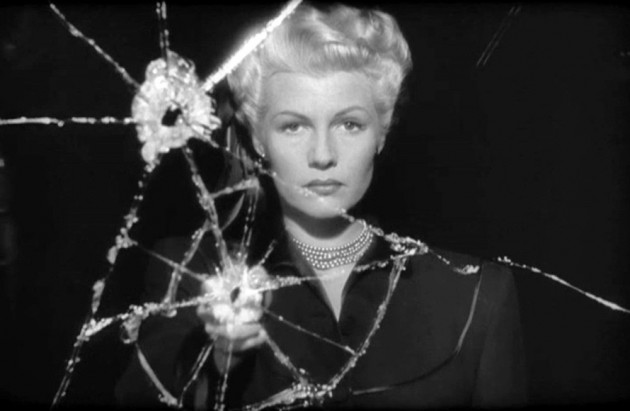 It’s a sublime moment, a glimpse at the more tragically-driven and wistfully-pained side that was always there – sometimes more predominantly, sometimes less so — behind the surface play and adventurous spirit of the cinematic behemoth (in all sense of the word) known as Orson Welles.

Eh. On second thought… maybe I would argue that The Lady from Shanghai is one of the great ones.