Much romantic melodrama and intrigue in the South Seas when the newly married, youthfully gleeful (to the point of being a bit of annoying lapdog happy dick) Polynesian Terangi (John Hall, the mightiest of white California dudes being absurdly passed off, classic era style, as an island native, especially obvious when standing next to the exotic dark beauty of his lady love, Dorothy Lamour, and the rest of the brown-skinned villagers) punches out a racist sailor at a sea port bar (this happens about 30 minutes in and was the first time myself and my fellow viewing compadres realized Hall was actually playing a native and not one of the imperialist white man forces, and that the elements of culture clash immediately apparent in the story weren’t going to come from a cross-culture marriage) and ends up waging a battle for his freedom, and for his life, against the cruel ruling French government’s law. Well, that is, until the hurricane hits the islands and all bets are off.

With John Ford directing and big stars Mary Astor and Dorothy Lamour starring (with a supporting cast of such already established names like Thomas Mitchell, straight out of Ford’s acting troupe, who would receive an Oscar nomination herein for his already fairly familiar drunken role as the sort of gruff, yet good natured super-ego conscience for our morally-conflicted main character; in this case, the always regal, sharply featured Raymond Massey) and the substantial running time (almost two hours), it was clear this wasn’t going to be a B-film “Deluge”-style quickie (which, with that 1933 at a rapid-fire 70 minutes, was its own pre-code fun), but a much larger-canvassed, Hollywood style big budgeter and, for better or worse, was going to spend a substantial amount of its running time selling us on star-driven romance and impressive production value before getting to the good stuff (you know, the blow-shit-up disaster spectacle that’s the film’s namesake and the reason we’ve tuned in in the first place).

True to its nature, the film starts slowly. I admit, I was missing the crazily fast start of Deluge, with its panicked opening montages shrieking the promise that disaster is coming in, like, ten minutes, and I began to wonder how difficult a slog it was going be to get to the hurricane (because as sure as you could be of a long A-picture lead-in, you just knew there was no way a film of this caliber would dare fail on the cataclysmic wind- and flood-devastation). Saying that, once you get over the entirely ridiculous notion of the Mitchell character approaching anything close to a French man (or Raymond Massey, or Mary Astor, or John Carradine, or… ) and the story evolves to the point of dealing with Terangi’s arrest, while it never really fully rises above mannered melodrama (and all that pollyanna glowing adulation at the beautiful perfection of those semi-native kids, Hall and Lamour), some interesting and worthwhile critical perspectives do grow out of the initial pre-hurricane ninety minutes. 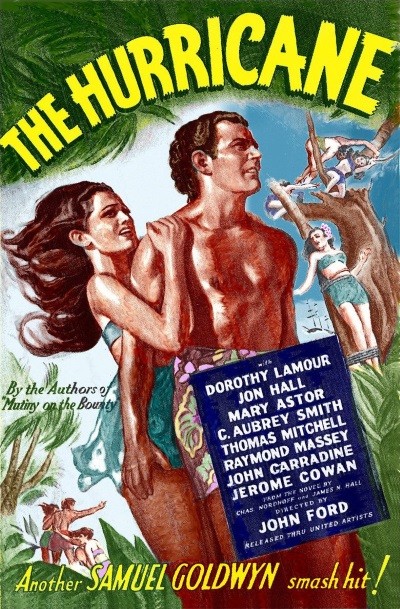 It’s interesting to see how willing Ford was with his story to challenge and criticize, both implicitly and fairly explicitly, from Massey’s staunchly colonialist law-beholden Island Governor to the barbaric injustice of the inhumane prison system, the cruelty and arrogance of the white man imperialists. In fact, when Massey’s Governor is proclaimed (while clearly intended to ring with underlying sarcasm) as a ‘sensitive colonialist’, it rang out as the kind of destructively delusional perspective the US Democrats use to align themselves with their current war-mongering, brown-people slaughtering leaders (the old “okay, they may be bad, but at least they’re more sensitive and thoughtful than those Republicans!” position)… of course, the major difference being, Massey does commit an act of genuine compassion for the natives at the end (an attempt at a happy coda that unfortunately dilutes the powerful critique Ford had established to that point by suddenly letting Massey off the hook, centralizing the potential for good in the white man, while suddenly neglecting the horrible reality that he’s standing on a spot where the night before the entire island’s worth of natives had been flushed away into the sea from the hurricane).

True to its promise, the climactic hurricane is great stuff, effectively mixing stunningly authentic large scale model effects with closer wide shots of our island players holding on for dear life as they are genuinely buffeted about by massive waves (I wonder if you could even get away with subjecting mass numbers of actors and extras to this kind of physical abuse today) as the entire village gets swept away in a massive tidal surge of destruction. The entire fairly lengthy sequence is rendered even more compelling as it’s presented with no music, just the sounds of wind, water, destruction and the the occasional voices of characters desperately yelling against the storm.

Overall, a worthy enough early example of the (almost always fun) disaster picture, not only having spectacular carnage, but also a surprisingly politically conscious sensibility in its lead-up.