A homosexual alcoholic novelist Gerard Reve (Jeroen Krabbé) living in Amsterdam, prone to vivid hallucinations, finds himself intrigued and unsettled by the androgynously beautiful woman Christine (Renée Soutendijk) during an out-of-town lecture he’s giving. Eventually sleeping with her (helped along by recognizing that if you turn her body certain ways, she almost looks like a boy), in the morning he finds himself driven to ecstatic desire at the photos of her current statuesque young male lover and finds excuses to stay with her so he can eventually meet him. As the hot boy arrives and the triangle of manipulations begins, with Reve discovering the violent fate of the woman’s last three husbands, the troubled writer begins to wonder who exactly is manipulating who… as well as who that other mysterious, holy blonde woman is that appears in his merging dreams and reality… 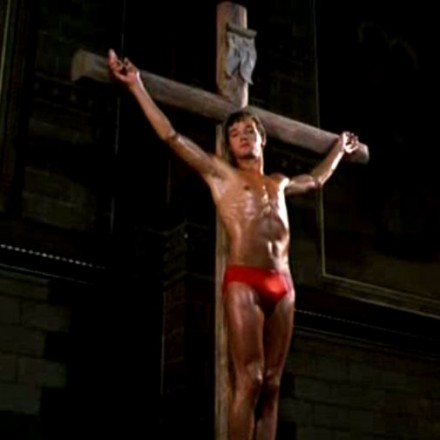 With its cheekily deliberate, profane imagery merging homo-eroticism with colorful Catholic imagery and it’s witty understanding of film theory language and symbols (when it isn’t Reve’s actual penis being cut off in his fevered nightmares, it’s eyes being gouged – get it? – and nothing like having Christine constantly filming her victims – er, I mean, lovers – to co-opt their male gaze!), The Fourth Man comes across as a Verhoev-ian (well, an ‘early’ Verhoevian, but more on that in the next sentence) take on Polanski’s odd-ball exploration into surrealistic brilliance, The Tenant from 1976. Having only recently seen his Spetters (1980) and now this film, what a pleasurable surprise to discover that Verhoeven’s work, while always wonderfully well-crafted and immensely entertaining (with a few exceptions, like 2000’s Hollow Man, which I saw and have only one memory of, that being the considerably pleasurable experience of Rhona Mitra baring her considerably desirable breasts, and 1997’s Starship Troopers, which I’m almost entirely sure I’m wrong about and will enjoy far more on seeing it again), at one time (pre-Hollywood) had this wildly underground, playfully subversive sensibility, rather than just the sensationalistic ‘naughty’, kinda prurient one that his more-celebrated American career delivered. 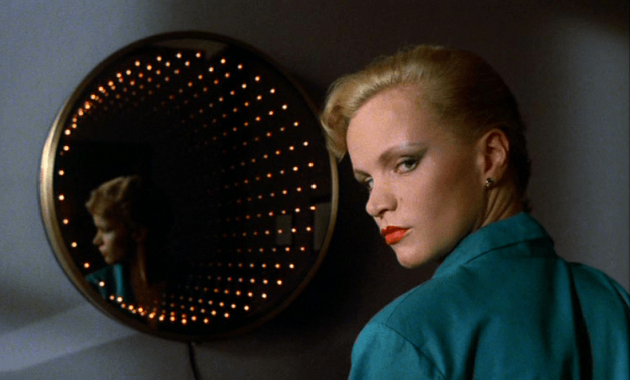 I can almost imagine his first interview with American executives – “Paul… we adore what you’re doing… but all those openly swinging dicks? And things like a besotted man openly fondling and burying his head in the crotch of the naked statue of the crucified Christ suddenly come to life wearing hot red tighties? Uh… you see… we don’t do that here.”. With Paul then leaning back and thinking “Ah, well, guess it means I’ll just have to settle for showing everyone Sharon Stone’s vagina.” A clear distinction reveals itself between Verhoeven’s pre-Hollywood and post-Dutch Hollywood careers. Truth is, if I only saw the former stuff, from what I’ve seen so far, I’d assume he was a bold gay filmmaker (or at least bi- or exploratorily sexual) spreading cheer in an in-your-face manner, while the latter indicates more a cunning filmmaker who understands Hollywood sensationalism, remaining wildly entertaining, yet being far less adventurous with his transgressions against patriarchy and religion (I mean, Verhoeven’s Basic Instinct, as much as I deeply respond to the deliciously indulgent storytelling and its neo-noir trappings, it’s hard not to notice that, with its evil lesbos and female fetishizing and leering, is about as challenging to the status quo as an issue of Penthouse). All to say, the Hollywood agenda and Kinsey report results such as the fluidity of sexuality don’t mesh very well.

I guess I could lament how Hollywood stripped the director of the radical and ballsy sensibility of his European work, but then again… knowing now how aware Verhoeven actually is (based upon that early work), it somehow also makes me appreciate the latter work that much more. He’s managed quite an entertaining and sexy career… and that’s whether you’re someone who fantasizes oral sex with Christ, or who gets off on some lesbian hotties doing their thing on the dance floor… or anything in-between, outside, over or under.