“The Brood is my version of Kramer vs Kramer, only more realistic.”

Frank (Art Hindle) struggles for the custody of his 5 year old daughter against his deeply mentally disturbed wife (Samantha Eggar, who plays full-blown creepy looney tunes like no one else’s business), currently locked away at the secluded Somnafree Institute where the ominous Dr. Raglan (Oliver Reed) practices a controversial, experimental psychological technique on his damaged patients called ‘psychoplasmics’ (ah, David, how we loved you for those made up sci-fi terms). If that isn’t bad enough, Frank’s starting to suspect the sudden intensely brutal murders of people close to him by what appears to be mutant children(!) might have something to do with the secretive goings-on at the institute and the isolated Raglan’s techniques (Raglan’s manifesto being named ‘The Shape of Rage’ might be a bit of a tip off). 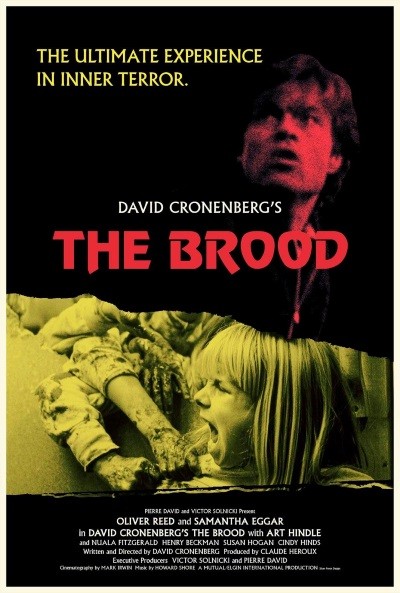 Having the good fortune of not only seeing the film projected again (via an exceptionally pristine 35mm print), witnessing its beautifully moody score (Cronenberg’s first of a long-term and fruitful collaboration with composer Howard Shore), sparse and brooding wintry Canadian setting (giving it a feel akin to something of a Bergman film at times), intensely brutal violence… and a single moment of such profoundly taboo-shattering imagery that retains the same level of wallop — in both intellectually challenging and disgust provoking terms — today as it surely did then, I will never understand how there was once a time that I (and I guess many other of us genre folk) somehow thought of this as, while still an admirable effort, somehow a slightly lesser effort. It isn’t. No way.

It is pretty clear to me now that it’s one of his most brilliant, mature and profound films… and, as somewhat indicated in that typically cheeky, deliberately provocative, status quo-loathing quote provided by Cronenberg himself above, it’s also one of his most personal. While the well-made, yet bourgeois and determinedly audience-comforting (hence, Academy Award winning) family custody drama Kramer vs Kramer ends with our bourgeois parents able to rise above heroically and make the right decisions for their child (having found growth and emotional prosperity through the difficulties of divorce), Cronenberg’s warring parents conclude splayed out in a pool of blood and gore (the remnants of the birth of literal raging monsters), with one of them having strangled the other to death… and their silent child left bearing the physical scar of trauma and ongoing rage upon her body. And where Kramer vs. Kramer’s female character is marked subtly as the Evil Witch the father and son have to overcome (with even the character herself recognizing she must step away at the end for happiness to continue between the two males), The Brood is much more straight-forward. Cronenberg wants his woman violently killed at the end of his saga. While no one’s gonna argue Cronenberg’s version as a progressive breakthrough, there’s at least an honesty to his version of ‘divorce’ that Kramer vs. Kramer doesn’t dare admit to.

Saying that, I do admit to a soft spot for Kramer vs Kramer; even with its cowardly status quo beholden attitude, I still somehow fall for it’s attempted earnestness (partly due to the fact that it comes from two heavyweight actors –- Dustin Hoffman and Meryl Streep) but when it comes to which I prefer and think is more truthful? The Brood wins, bloody mutant children’s hands down.