A World War II pilot (Russell Wade) with a rich manipulative fiancée (Jane Greer) falls for a torch singer with a heart of gold (Frances Langford) and ends up, to help gain the confidence of his new crew, having an image of her painted on his B52 bomber as ‘The Bamboo Blonde’. After a successful mission, her image becomes an overnight sensation and her fast-talking nightclub manager sees opportunity and lots of dollar signs spinning before him… only to realize his singer has actually fallen for the naïve fighter captain, which him and Greer’s suddenly jealous fiancée aren’t too thrilled about. 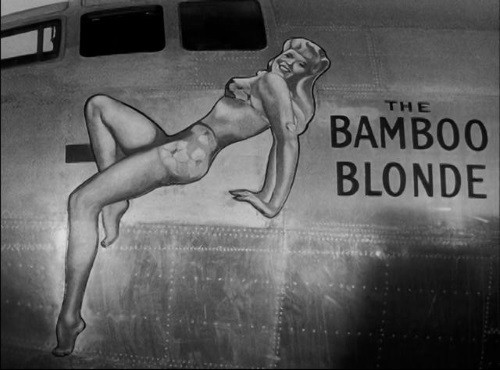 It was an odd twosome of films at the CQ, with “Blonde” being a (very) light RKO B-musical quickie and the film that followed, the somewhat more dynamic 1949 Easy Living, a romantic drama about the behind the scenes manipulations and pressures of American professional football (it plays as an early, also flawed, yet better version of Oliver Stone’s Any Given Sunday from fifty years later, but more about “Living” in my next post), with their only thematic link being their initially surprising inclusion in the program at all, with neither being particularly film ‘noirs’ or ‘anxiety’. Perhaps they’ve been included (in a programming move that’s either quite clever, or just lazy, not quite sure) because both involve iconic figures who either were, or would become within a year, immortalized in film noirs of the late 40’s, into the 50’s.

Blonde is directed by Anthony Mann, at the time still considered a neophyte who was apparently jumping on anything available (he had already directed 10 films by this time – an entire filmmaking career by today’s standards, yet merely the ‘beginnings’ for a 40’s studio director), who would go on to many an important film noir (his first was his next, Desperate, which also played – much more immediately understandably – as part of the CQ program) and has a co-starring role with Greer, who has some of the manipulative shadings of a femme fatale, but nowhere near the lush and grandiose steaminess with which she would drip just a year later in the acknowledged noir masterpiece, also by the studio RKO, Out of the Past (which was directed by the journeyman director and Martin Scorsese favorite Jacques Tourneur, who – again, perhaps not coincidentally, CQ programming-wise – directed the football movie Easy Living, which starred Victor Mature, an actor who himself would cover a lot of important noir ground).

Whatever the reason the film was programmed, it’s light fare, showcasing some musical numbers by Langford that are easy to take, yet forgettable, in a film that, while painless to sit through (and fast at just over an hour), offers little resonance, either in directing, cast or story. It’s why I’m glad I write down at least a little something about each movie I see, so I can remember, for the more forgettable confections on the list, that I even saw them.