No. The second film has nothing to do with me. It was produced by Korean money, shot by Godfrey Ho, a Hong Kong director and was filmed in Manchuria. Some people called me from Holland and said ‘We’ve seen your film Man Behind the Sun 2 ‘. ‘What the hell are you talking about?’ was my reply as it was the first I had heard of it.

What was the reason you directed The Nanking Massacre ? Was it a genuine follow-up to showcase the Japanese atrocities in China?

I had plans to make a trilogy in which Man Behind the Sun was the first. The Nanking Massacre is also a very graphic film where Japanese soldiers abort a woman’s foetus with a bayonet. However, the response to the film was less extreme than Man Behind the Sun . I think that people in the West are not interested in what happened in Asia during the Second World War, hence the reason why The Nanking Massacre was not sold in many territories. As war films go, the Americans are only interested in what happened to them.

Regarding Man Behind the Sun and The Nanking Massacre , did any other films that are based on the Japanese occupation of Manchuria such as Bamboo House of Dolls inspire you as director? What about women-in-prison films like ‘Ilsa’?

No. After leaving school, I was burnt out on watching films. People ask me why I don’t watch films in the cinema anymore – this is my reason. In a year, I’ll probably see one or two films. And I only see those films because my wife asks me to go with her (laughs). It’s hard to say why I loved film so much in my early years and now prefer not to watch them. I guess it’s like someone who eats pizza all day, and after a few days becomes bored of it. But making films is very different because it is creative process.

The music score for Man Behind the Sun is very heroic and not at all downbeat as the subject matter suggests.

I don’t like the score at all. When I heard it, I instantly disliked the score and only used a few minutes for the film. 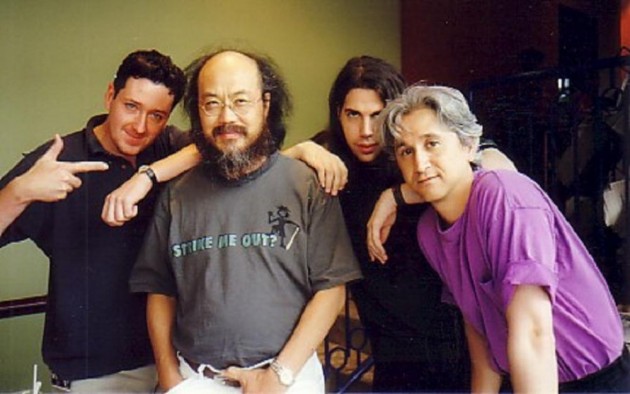 When the film ends, the credits state ‘Did They Die in Vain?’ meaning the deaths and experiments of the ‘maruta’. Could you please elaborate on this issue?

It has been many years since the Japanese medical experiments and it seems that no one cares about what happened in Camp 731. The older generation of Japanese don’t think they died in vain although they obviously did. It’s a question that I had to ask.

You have incorporated animal mutilation into the film. Movies such as Cannibal Holocaust have been criticised for their use of animal mutilation and are deemed as taboo. In Man Behind the Sun, a cat is eaten alive by rats in a four minute sequence which can be seen as sensationalism. Why use such graphic material?

I know the English love animals – I like animals too. As the director, that scene has a meaning – it’s up to you to discover what it means. I’d like to change the subject, if at all possible.

Critics have said that Man Behind the Sun is a sensationalistic picture due to its excessive violence and bloodshed. What is your reaction when people claim that the film is simple exploitation so that it can appeal to a wider audience?

Like I said before, people are allowed to express their own opinions. Man Behind the Sun is not exploitation. If I wanted the film to be a splatter film, I could have made it far more shocking than it is (laughs). It was very difficult for me to decide if the film was over-the-top or if I had to make it more gruesome. I still want people to know how terrible the Japanese camps were and that’s why I can’t see what’s the big deal over the boy’s autopsy – I had to show something.

Did you cut scenes out of the final print believing that they were too powerful?

Not really, I didn’t cut that much. When I made the film, I knew exactly how far I could go. The script had scenes that were perhaps too graphic and I decided not to film them. At the time, I wasn’t thinking about the censors. In China, they tried to cut out a lot of scenes. I went back to Beijing and met the censors so I could discuss the issue with them. We had a meeting and I said that I made Man Behind the Sun for the people who died in Camp 731, not the living. The censor agreed that I could cut the film personally, but they asked me to edit a little so that I could save them ‘face’ [note: A Chinese term for personal pride and honour].

Many countries throughout the world have cut the film or banned it outright. Obviously, each country will have problems with varying types of material such as the animal violence, autopsy and degradation of children.

I have no idea how the film was received in various countries. I hear rumours that say the film has been cut but they’re not specific. In Europe, the animal mutilation tends to be cut. It didn’t get an American release but was granted a minor distribution in Chinatown video stores. In England it can be bought but strictly as contraband. The film is also uncut in Australia and Spain. I heard that when the Australian censor was viewing the film, halfway through the film stopped. The censors waited for a few minutes thinking that there was a technical error and the film would resume rolling. Nothing happened, so the censors walked into the projection room. They found the projectionist had stopped the film and his reason why was that he couldn’t stomach any more – he had had enough! I don’t know it it’s the truth, but that’s what I heard (laughs).

Could you please tell me more about your latest project No More War .

This film is going to take some time to shoot as it’s getting more difficult to make this type of movie. I need more time to do research and am having problems with gaining secure financing. It will be a very graphic film but it won’t be in the same league as Man Behind the Sun . Then again, I may make it far more gruesome – who knows what happens when I get behind the camera. No More War is a very simple story of children who are caught up in the Japanese retreat from Manchuria in 1945. Civilians seek revenge on the Japanese soldiers and start to kill them and each other. Once most of the adults are dead, the children begin to kill too – a very sad story.

Since Man Behind the Sun , have you found that your name has gained itself a reputation and distributors don’t want to sell your movies? Have you been blacklisted?

In Japan, yes! Even if I made a children’s fantasy fairy tale, I don’t think they would touch it with a barge-pole because of my previous film. What can I say? (laughs).