Having watched Bullitt in anticipation of speeding along the topsy turvy rollercoaster-like streets of San Francisco for the upcoming northern leg of my coastal California trip, I thought it appropriate to re-watch a film set in that sketchy City of Angeles where I was headed for the latter half of the voyage, a place where the elite few who have ‘made it’ hunker comfortably away in their homes in the Hollywood Hills gazing down below at the vast majority of jealous and desperate riff raff who’ll almost assuredly never touch their success.

So Tangerine it was, a film, in looking back, I realize, somewhat surprisingly, I went to see on its initial release (I have no idea what inspired me to go to the theater for not just the rare new film, but a Sundance favorite to boot, which the only thing that turns me off faster than the self-congratulating latte liberal crowd adoring a movie is when the infantilized male adult population get all wet and frenzied over the latest corporate-product superhero blockbuster), but whatever the reasons, my instincts had proven correct, as Tangerine was more than worth the view, even if it meant enduring spending a bit of time sitting amongst the smug privileged, content with their identity politic cred for spending 90 minutes watching a film about people less fortunate than themselves.

With its main setting the drug and prostitute-riddled West Hollywood intersection of Santa Monica Boulevard and Highland Avenue, where a slip of a tongue during a conversation in the dirty donut shop that acts as the epi-center for much of the drama to follow (including the poignant, and hilariously tumultuous ending) between two black trans sex workers, best friends who brave the rough streets each day – namely, the emotional train wreck of a diva Sin-Dee (Kitana Kiki Rodriguez), who just finished up a 28-day prison sentence and looks positively gaw-juss dressed as a sexy slinky woman, and the statuesque and muscular Alexandra (Mya Taylor), she of the regretful momentary loose-lips regarding Sin-Dee’s drug-dealing pimp’s cheating ways while Sin-Dee was doing time that then leads to Sin-Dee’s ensuing alternately funny, outrageous and sad rampage, as well as a side story featuring the struggles of Armenian cabbie Razmik (Karren Karagulian), caught between supporting his wife and child while trying to hide his barely-contained obsession for a certain kind of street trade – namely, chicks with dicks (and therein linking the story back to Sin-Dee, with the smitten cabbie having learned his fave boy/girl is back on the street, determinedly tracks her down for the great donut shop finale where Razmik comes upon Sin-Dee confronting her skinny runt of an amusingly dirtbag pimp, who does his best to worm out of her charges of infidelity, just as Razmik’s horrified mother-in-law, who has been tailing him, suddenly shows up – all happening on Christmas Eve, no less!), Tangerine fit the bill perfectly for my lead-in to LA (not that I’m into chicks with dicks, or any street trade for that matter, but it’s a film that captures a milieu that isn’t hard to see when you like spending time wandering the streets of LA like I do when I visit).

With its super-cheap aesthetic (apparently all shot on cell phones), socially-aware setting and ‘human’ approach, Tangerine has a kind of throwback feel of 90’s indie Angelika Film Center fare written all over it, but yet it manages to transcend those trappings, as something really genuine and touching ends up showing through (aided immensely by the engaging performances, all around, but especially by Rodriguez and Taylor). 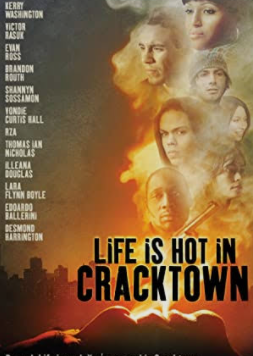 It has nowhere near the grit, toughness, or unforgiving violence that, say, a Buddy Giovinazzo film would have in exploring the harsh American street terrain… but that’s likely a reason for its critical success (the last thing a filmmaker striving for the affections of the latte crowd wants to do is have that comfortable audience coming out feeling ‘bad’ – and certainly not blaming themselves for any of the socio-economic realities the film expresses). Take a look at the aforementioned Buddy G’s Life is Hot in Cracktown which came out six years before Tangerine, for an equally poignant and painfully human film, but one from a far more uncompromisingly harsh (more honest?) perspective, to get an idea of the ‘distasteful’ elements that keep a brilliant film – and filmmaker — from becoming a critical darling (a position Buddy certainly has earned, but cinematically gut punches too hard to likely be granted); in fact, a double feature night of Tangerine and Cracktown would make a worthy evening just for that comparison alone… a chance to view two wonderful films, and two excellent filmmakers plying their trade, working in similarly tough turf, yet each leaving its audience with vastly different feelings to take home with them.