Sweet Karma is a Canadian exploitation/revenge film that played to a very responsive Fantasia audience in 2009. The film has been newly released on DVD by Phase Four Films . Sweet Karma (produced by Black Fawn Films) has been described in several online reviews as a return to old school vengeance film, with a kickass hero (heroine in this case) who stops at nothing to avenge a wrong. This is largely true, but a twist at the end works against the predictable genre patterns it seems to be built on. In this case the heroine is a beautiful mute Russian woman, Karma Balint (ex-model and Miss Playboy Nov. 2010 Shera Bechard, and currently Hugh Hefner’s ‘girlfriend’) and the wrong is the unexplained death of her sister, after she immigrated to Canada to gain employment as a domestic worker. The lure of domestic work is a ruse set up by a Russia-Canada sex slave operation. The women, chosen for their youth and physical attractiveness, are instead forced to work in a dance club where they are expected to provide sexual favors in exchange for money. Karma’s sister, Anna Balint, was lured into the operation and has since gone missing presumed dead. The sex trade operation on this side of the Atlantic is headed by Stefan (Frank J. Zupancic), aided by his ice-cool girlfriend Malva (Laura McLean). 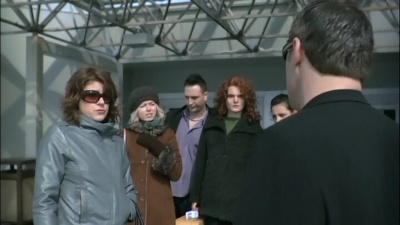 The film’s opening recalls The Limey in the way both films open with a taciturn (in this case mute) stranger arriving in a strange town –a Brit arriving in California in The Limey, a Russian woman, arriving in Toronto, Canada in Sweet Karma. The opening scenes in their location, use of hand-held camera and cutting (non-linear montage between Karma arriving in Toronto and her set-up and execution of the female contact in Russia before she left for Canada) also recall the Soderbergh film. Karma (Bachard in the film’s best performance) makes her way out of the airport, avoiding the Russian thugs waiting to pick her up, and takes a cab to a cheap motel. Shots of her sitting contemplatively in her motel room echoes Terence Stamp’s Wilson character in The Limey. The scene cuts to her meeting with a Russian woman who gives her details on her missing and presumed dead sister Anna, who we see interacting with Karma in a flashback. Like in The Limey, the stranger (Ed Roel in The Limey) appears friendly, and offers a sympathetic ear and clues of her missing sister (daughter in The Limey). Both Karma and Wilson hold newspaper headlines reporting the respective deaths of the people (daughter, sister) they are avenging, as well as photos of them. In Sweet Karma the headline reads “body unidentified” which ends up being a retroactive clue, since the twist in the end is that the sister is not dead after-all, but has gone into hiding with a former rich patron who bought out her contract/debt, just as there is a twist revealed at the end of The Limey relating to the exact nature of the daughter’s death.

The Limey ‘Echoed’ in Sweet Karma 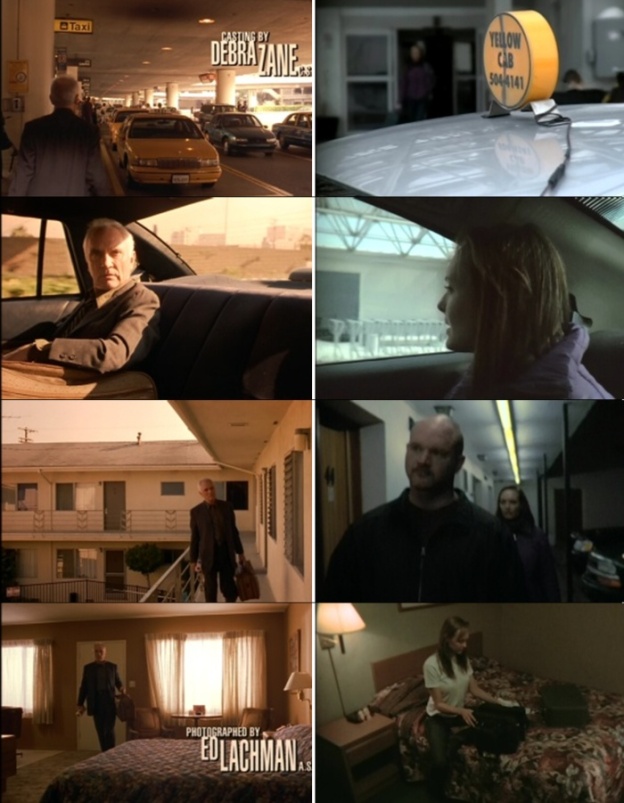 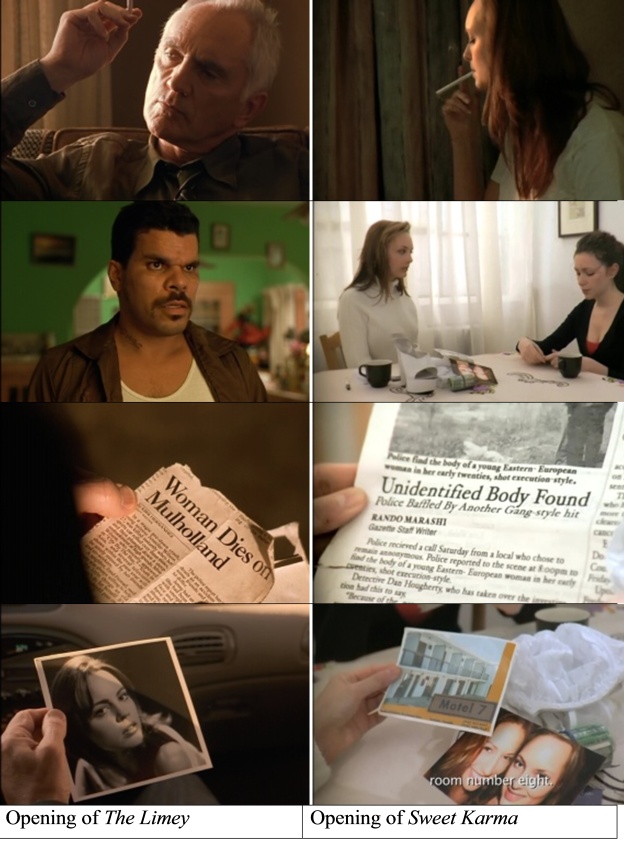 Karma’s first leads take her to the strip joint which is used as a front for the sex slave operation. She stakes out the place, biding her time before making her first move, which is to seduce the strong arm who runs the dance bar, Tomas (Christian Bako), who she rightly surmises would have been closest to her sister, given his position: Tomas’ job profile includes gaining sexual favors from the new employees, something which he assumes is a right rather than sexual blackmail. The extent of the operation’s sordidness comes early, when one of the new Russian recruits (seen in the image above wearing the green cap), timid and unresponsive to her enforced position in the sex industry, is taken home by a deceptively sympathetic Tomas, after an evening where she refuses to ‘work.’ When Tomas’ sexual advances are ill received he takes her by force and rapes her. A few scenes later the woman is found dead in her apartment bathroom, her wrists slit.

Much to the audience’s satisfaction, Karma’s first victim in her path of vindictive destruction is the reprehensible Tomas. This first kill is the most satisfying of the film –largely because the unlikeable Tomas has such an air of pompous superiority that seeing him overwhelmed by a woman is particularly enjoyable– but also because it is the kill that has the most deliberate and sustained build-up. After spying on Tomas during a private booth dance, Karma decides to make her move by pretending to be a new dancer and stealing her way onto the stage, with the expressed purpose of seducing Tomas (requisite suspension of disbelief required here, because she dances REALLY good for a novice). The potential for sexually exploiting her long strip dance number for salacious reasons is tastefully played down by the adopted quick cutting pattern of this scene, which frustrates the male gaze by making it impossible to stare at any isolated parts of Bechard’s stunning body for more than a few seconds (this is certainly not Tomas’s point of view, who stares like a kid in front of a candy store). Unlike most films that feature a strip joint as a location, Sweet Karma makes good use of the ambient music. For example, the song that plays during Karma’s seduction dance of Tomas is, sarcastically so, “Be My Friend” by Darkel. 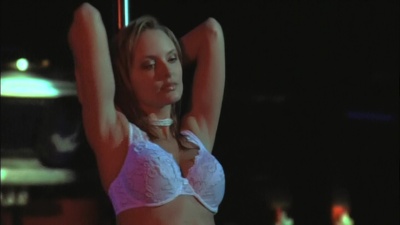 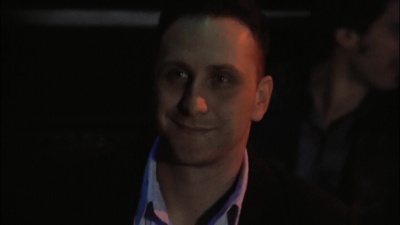 Her plan works, and Tomas follows her into a bathroom, where Karma physically disables him with spiked cocaine, cracks his head against the porcelain toilet cover and then strangles him to death.

The otherwise generic revenge plot is given a pleasant injection by two major narrative twists, a minor one and a major one, with the second major one carrying an emotional wallop because it undercuts the traditional cathartic payoff that accompanies the moment when the good guy satisfies his or her vendetta. WARNING: MAJOR SPOILERS. The first twist is when one of the criminals in the gang is revealed to be an undercover detective who has infiltrated the ranks in an attempt to break the sex slave operation (a twist that goes back to 1949’s White Heat, only there the twist is only on the character, Cody White, played by James Cagney, and not the audience). The cop is William (John Tokatlidis), who confides his disguise to Karma and ends up driving with her to the home of the man who they learn is the financier of the sex slave trade. Karma’s confrontation with the corrupt business man is thwarted when she enters the home and discovers her sister living with the man. Major plot twist two: Karma’s sister Anna is alive and well and living with the man who rescued her from a life of horror. Anna claims she loves him and begs Karma not to kill him, but Karma can only feel the hurt of deception and the dawning reality that she killed and risked being killed for a non-existent mission. Like in The Limey, Karma’s desire to give her vendetta closure by killing the final bad guy gives way to the self-realization that vengeance serves no moral purpose in a world where the good (Anna) become complicit with the bad (her corrupt savior). Both Wilson (Terrence Stamp in The Limey) and Karma decide against brute justice. 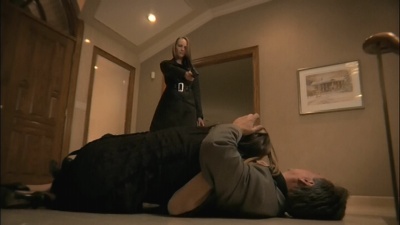 With her gun cocked and ready to fire at the sex trade operation’s silent partner, the film cuts to a flash memory montage of all the horror and violence Karma has incurred in her efforts to avenge her sister. The scene cuts to an outside view of the house, and we hear (and see the flare of) two gunshots. The scene cuts back in the house to a low angle shot of Karma with her gun raised in the air. The final scene shows Karma at the airport leaving for Russia. Her last act is one of resigned failure: dropping to the floor a gold cross given to her by her sister before leaving for Canada, a token which represented the bond between them. Karma’s pointless murder rampage leaves the audience in a far more pensive state than you would expect from a vengeance film. 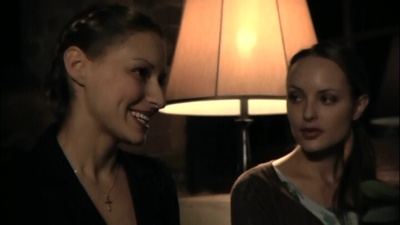 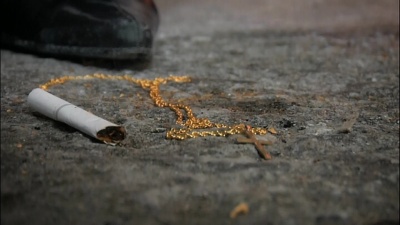 Canadian cinema is not known for its exploitation cinema, but this is somewhat of a myth since Canada has produced its fair share of genre and exploitation cinema (so much so that there is a whole website dedicated to it, the excellent Canuxplitation). The majority of these were made during the boom period of the Tax Shelter Period, when most of the Canadian horror/thriller films were disguised as American. What is nice about Sweet Karma is that it does not hide its Nationality. Toronto street signs are in plain view; money that is exchanging hands is plainly Canadian; and if that wasn’t ‘Canadian’ enough, the criminals have an impromptu debate on the merits of a Tim Horton’s franchise (not Dunkin Donuts) and hockey! 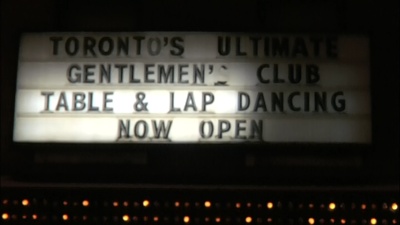 The Phase 4 Films DVD release of Sweet Karma will not win any prizes for the lackluster quality of the transfer, but at least it is 16 × 9 anamorphic and uncut, and the fact that it isn’t a pristine transfer might just be appropriate given its sordid characters and its genre pedigree.