A good a time as any to hit the fifth, almost annual at that point (as their 15 minutes had some traction), entry in the slightly hazy, vaguely subversive (back in much more innocent times) misadventures of those two dopey stoners Cheech & Chong (being one Tommy Chong and one Richard ‘Cheech’ Marin) and… if the twosome’s drugged out stereotyping personas were starting to show signs of stretching thin (especially during their last effort, Things Are Tough all Over, which still had its moments, but the overtly silly factor and reliance on fart jokes was starting to gain greater traction), Still Smokin’ definitely hits a low point.

In this one, with the boys travelling to Amsterdam, where they’ve been invited by a friend of Chong’s to perform at the first annual Burt Reynolds/Dolly Parton Film Festival and instead keep getting confused for the stars (who don’t show up) is kinda amusing (if not all particularly well realized about people of the Netherlands, but more on C&C’s complete cultural/social blindness later) with Cheech constantly referred to as ‘Mr. Reynolds’ and Chong, in one of the many instances of just winging-it oddities the duo go with, as ‘Mr. Parton’.

As we follow the duo around on their festival indulgences, including Cheech hooking up with the cold, magnificent statuesque beauty (at least one area they managed to get culturally correct) of a room service maid who ends up ravaging them both into desperate exhaustion, to Cheech tripping out at a restaurant where they have no idea all the food is filled with marijuana (it’s Amsterdam, of course) with Chong unaccountably turning into a large laughing pink teddy bear, and to a series of random skits, clearly taken from their stand-up act (and that feel a lot like ways to fill up the runtime, which is already only a little over 80 minutes), that play out as daydreams of Chong, you really get a sense, while it’s nice to see talented folk enjoying their success after years of hard work getting there, that perhaps, over these films, the duo was becoming a bit too confident in their natural talents being able to overcome a lack of effort. 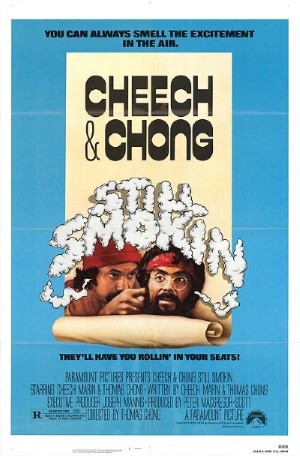 Gone is any hint of the subversive socio-economic commentary (the struggle to get a job, the police constantly harassing them, stealing gas to fill their tank to get to work, time at the welfare office and at bail hearings) that, while not exactly prevalent in the first two efforts Up in Smoke and Next Movie, at least served as some backdrop to their shenanigans, replaced by two comedians who feel a bit too filled (and perhaps content) with their lots in life.

With a number of the skits, including the one of them as gay dudes dressing in drag for a ball, using perfume-spraying dildos and talking very fey, and another of them as a Sumo wrestler tag team (with cute names like ‘Itchy Scratchy’) stretching the balls of their invisible man opponent, are so easy and bereft of anything but the silliest funny face kindergarten-level humor and a lot of R-rated dick jokes and scatological humor, it’s hard to quite figure exactly who they’re appealing to, other than perhaps the least demanding adolescent stoners sitting on their couch so consumed by the drug-induced hyper-sensation of the large bag of chips they’re eating that they don’t notice how truly mind-numbing it all is.

As often happens when comedy goes really bad, there can be a certain amount of fascination with watching the train wreck. If I wasn’t somewhat bemused by the laziness, I could almost imagine their desperate gyrations as some kind of weird performance art for overgrown children. And, as overtly culturally mentally challenged as their skits are (as with their dim-witted and violent uber-rich Arab sheiks in their last effort Things Are Tough All Over, they offer no insights, only reinforce stereotypes, in their bits on gays, Japanese, Texas cowboys, street singers), I still find it hard to dislike the bumbling duo; with Cheech’s persona being of a sex-crazed, dope addled, shiftless Mexican and Chong an over-privileged, possibly brain damaged from way too much drug experimentation drifter, it’s not like they come off as Western imperialists out for personal gain or something. Despite everything, I like these guys – they’re like sanitized, non-dangerous, gentler — entirely apolitical — versions of reporters from the drug hazed trenches like Hunter S Thompson, if that even makes any sense.

In other words, I’m still all in on the continuing adventures. I figure, with their individual side efforts and cameos in other films, it only means another ten movies or so; a mere blip for an obsessive completest like me!