Having only recently learned of the existence of this animated continuation of the original series, with most of the celebrated characters returning and with the original cast doing the voices as well (with the notable exception of Walter Koenig’s navigator Chekov, who is replaced by an orange, six limbed high-voiced alien Lt. Arex, voiced by Chief Engineer Scotty himself James Doohan, who — along with providing us that loveable Scottish brogue — or whatever it is — proved himself impressively adept at an array of additional character voices, some of which I didn’t even realize were him until reading the credits afterwards), I was intrigued enough (and also had recently introduced the entire 3-season run of the original series to my daughter) to check out this show that, for whatever reason, seems to have fallen a bit into canonical obscurity in comparison to the many other takeoffs from the original show. 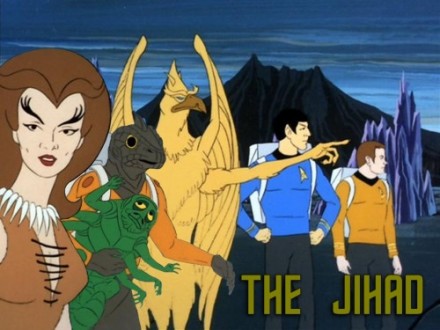 Acting as a bridge across the decade long gap between the end of the original series in ’69 and that first brilliant (and unfortunately too philosophical for its core audience) 1979 film by journeyman director-extraordinaire Robert Wise, “The Animated Series” also revealed itself as a triumphant return to the Star Trek universe for godfather Gene Roddenberry and, perhaps maybe even more important, female story editor and key creative cog DC Fontana, as both of them, tired of the dwindling budgets and increasingly unfriendly time slots pushed on them by the networks during the original show, had receded, handing the daily stewardship over to much less creative hands for season 3 of “The Original Series” (otherwise known as “ST:TOS”, not to be confused with the animated series abbreviation of “ST:TAS”… and that’s only the beginning of the moniker madness when all the Star Trek offshoots get thrown into the mix), leading to a real down turn in quality in that final season.

With Fontana and Roddenberry bringing back a number of the original show writers (many who disappeared from Season 3) and an animation that may have had plenty of limitations (especially when it came to character movements), yet still allowed for exotic alien lifeforms and impressive planetary landscapes (including the first views of Vulcan in perhaps the greatest time travel story I’ve ever seen, “Yesteryear”, in which Spock returns to the past to save his younger self after having created a convergence conundrum by simply having passed through time) and vast views of space that could only be hinted at in the original show, the first five or so of the 23 minute episodes (including the aforementioned time travel story, another one that includes the crew debating whether they have the moral right to end a life form, even if that life form is one that destroys planets to survive, and another that ends with a lonely planetoid that had manipulated the Enterprise into its orbit to trap it forever desperately — and hauntingly — pleading for the departing ship to stay) had my mind swimming with how brilliant it was; unfortunately, I was also wondering who thought it was a good idea to run this thoughtful, dialogue-heavy show during the Saturday morning youngster cartoon schedule?? In fact, it was while watching these that my daughter finally bailed on the show and left me watching without her. No surprise it only lasted a season and a half… then again, perhaps there was never really any place to put a show like this at the time, so I guess better to be happy it exists at all.

Though the remaining episodes didn’t always keep up with that initial burst of brilliance the early entries provided, a level of intelligent conceptual sci-fi was present enough that I’d say that the entire 22 episode animated run can be put right up there with those first two great seasons of the original show and, further, that the best of these animated efforts are at least as good as any of the most iconic episodes.