Bounty hunter Ben Brigade (Randolph Scott) escorts killer Billy John (James Best) back to Santa Cruz, while outlaw Sam Boone (Pernell Roberts) and his sidekick Whit (James Coburn), accompanying Brigade for their own reasons (that is, if they can get Billy John away from Brigade – by any means necessary — and bring him in on their own, they’re promised amnesty for their own crimes), can’t quite figure out why the laconic Brigade is going so slow as to allow Billy John’s dangerous fugitive brother (Lee Van Cleef) and his gang to catch up with them… yet all will be slowly revealed…

While I’d read a bit before about the five or six Technicolor westerns that make up the Ranown Cycle – all directed by Boetticher, featuring the wonderful melancholic presence of the craggy- and leather-faced Scott, written by Burt Kennedy and produced by Scott’s production company Ranown (hence the title of the cycle) – this is the first I’ve finally caught up with… and if the tightly constructed “_Ride Lonesome_ is any indication of how exceedingly well-crafted and entertaining these films are, man, I gotta make it a mission to catch up with the rest. 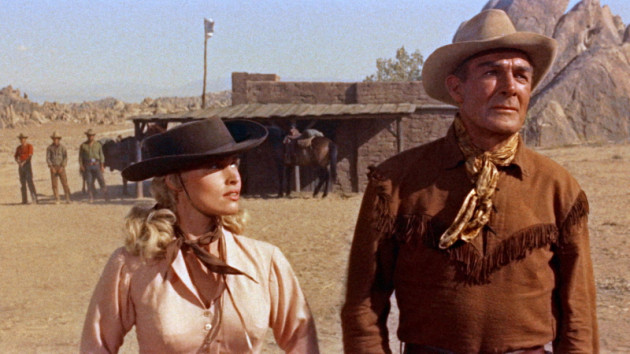 Wasting no time, dropping us in the middle of the story and filling us in as it goes, all while clocking in at a short, yet tasty sweet, 73 minutes, right from its opening scene, “Lonesome” unfolds like a masterclass in storytelling construction… with Brigade, gun drawn, demounting from his horse and carefully slinking through the desert mountains… and coming upon the casually waiting Billy John, with the ensuing conversation unfolding in a way that has us first thinking they might be friends, then realizing in fact that Brigade is there to bring him in, then to the reveal that Billy John has gunmen in the bushes surrounding them, their weapons pointed at Brigade… to then Brigade’s resourceful way of nabbing Billy John without a shot being fired, is screenplay construction worthy of Tarantino (containing that similar shifting power dynamic, which centers around ‘Knowledge’ and who exactly knows what, between characters and even the audience, as the usual focal point of Tarantino’s most deliciously tension-fraught scenes).

I also think of the iconic moment in Jaws in which fish-out-of-water Sherriff Brody is finally figuring out how to tie the proper boat knot, not realizing that the shark is quietly chomping at Quint’s bait, quietly tugging the fishing line… until the two moments align brilliantly (with Brody triumphantly exclaiming that he’s done it! – just as the fishing line goes haywire with the shark fully announcing its arrival). It’s a near perfect illustration of just how good Spielberg (once) was as a storyteller, understanding it’s not just in the main event, but in the multi-layering.

The finale at Hanging Tree

And that’s something Ride Lonesome‘s screenwriter Kennedy certainly understood. Just watch the scene where captive Billy John has managed to get his hands on a rifle and holds it against Brigade, with the others watching. Perhaps the least interesting element is whether he’ll actually shoot Brigade (it’s too early in the narrative for that to happen), yet it plays wonderfully with all sorts of tangential dramatic tensions – with Boone telling Billy John it’s his rifle and unloaded, daring him to shoot it, making us consider Boone’s own motivations (Brigade’s death would get him out of the way) and whether he’s telling the truth or not about the gun… leading to Billy John reluctantly handing the gun back, with Boone then shooting the bullet in the air (revealing the gun as having been loaded), culminating with the gunshot successfully reviving the horse that Brigade had spent the previous night trying to convince to stand up and survive its leg wound! It’s the kind of sublime scene construction, satisfying on so many levels, it would make Monsieur Spielberg proud.

Of course, you could argue (convincingly) that there’s a bunch of regressive elements from yesteryear’s Western movie going on here. While pre-70’s Hollywood has often been accused of presenting Native Americans as mindless savages, mere obstacles to our White Man heroes, I would argue there are plenty of films over the years that, while still centered about the plight of the White Man in a dangerous world, still managed to present a far more complex view of the Natives than given credit for (Fritz Lang’s 1941 Western Union, for instance, that I recently saw and wrote about, is far more sympathetic in its portrayal of the relationship between Injun and White Man)… but “Lonesome” isn’t one of those (what can I say… when you got only 73 minutes to tell your taut little tale, not everything can be presented with complexity!). And its old school chivalrous attitude to the women-folk would assuredly be met with derision by today’s intolerant youth, with both Brigade and Boone (and the Natives!) fighting for ownership over the single woman in the film, Carrie Lane, whose husband has just been killed by the Injun folk, with Lane played by the relative unknown (I certainly didn’t recognize her, and I would have remembered those distractingly perky breasts anywhere) Karen Steele.

So many Westerns, explicitly or implicitly, deal with (and often lament) the approaching end of the Wild West, with its rugged individualism and sense of frontier justice slowly forced out before the coming of a shared ‘civilized’ society of common laws (often represented by the background arrival of the railroad, or encroaching phone lines). While you get a bit of that reflected here in the narrative structure, with the two world-weary wise men each having a younger counterpart, Brigade having his captive Billy John (who is granted a surprisingly chivalrous moment, telling our perky Ms. Lane to go back inside so as not to see the Injun massacre that has just arrived with the stagecoach) and Pernell’s Boone having Coburn’s relatively dimwitted sidekick, it really thematically kicks in by the end, with Brigade standing alone before his cleansing act of burning the hanging tree (the most stunningly gorgeous image captured in the film, a clear inspiration, consciously or otherwise, for many a Paul Schrader ‘God’s Lonely Man’ film to come), left behind, to fade away with an old life that includes individual vengeance as a core principle, as the others move on with their captive Billy John to the modern civilization represented by Santa Cruz… where Boone will also ‘cleanse his sins’, but in a more dubious manner… by bartering for it, with political figures that have the power to forgive criminal transgressions (hinting at the moral compromise of the ‘New World’).

Scott aged into such a great presence for this kind of uncompromising role, with barely any emoting at all (it’s all in the presence). And it’s fun to see lots of young faces in early roles, actors that would soon grow into stardom – including James Best, immortalized today for playing the bumbling Sherriff Roscoe P. Coltrane on the wildly successful dim bulb of a hick-town show Dukes of Hazzard (for those old enough to have lived through those very peculiar 1970’s television days), Lee Van Cleef (just a decade away from being swept up into gritty and glorious spaghetti western mania) and Coburn, naturally, the soon to be far biggest of the bunch, rocketing to massive Hollywood superstardom in the next decade with the Bond-parody “Flint” films, making his actual film debut here.

Like the world in the film itself, Ride Lonesome is the kind of film that just isn’t made anymore. In its study of a clear and determined moral perspective that, while perhaps outdated in many of its traditions, stands in direct contrast to the ambiguity, corruption and self-delusion that the opportunistic corporate-controlled capitalist world has brought today? That is something to lament. Nice work Boetticher, Kennedy and Scott. I’m right there with you guys. Can’t wait to see the other films in this cycle.