With the Eyes of Others: Reza Mirkarimi’s Today in Perspective

It’s no secret that in recent decades, Iranian filmmakers have risen to the ranks of the best on the world stage. The likes of Abbas Kiarostami, Jafar Panahi and Asghar Farhadi are, even if not household names, widely respected among critics and audiences alike. Their films, noted for their rendition of complex human interaction in delicate realist tones, have stirred viewers and compelled them to think through their visions at a deep level. Many of them have been hailed as gems of world cinema. So it’s surprising that Reza Mirkarimi’s Today, Iran’s official entry for best foreign film at the 2015 Academy Awards and a masterwork in its own right, has yet to garner the attention it deserves.

We may be tempted to see Mirkarimi’s work as imitating that of the well-known directors. But as with any emerging artist, his creation is inspired by those of the masters while seeking to go beyond them. Take the opening scenes of the movie. We enter the scene through the perspective of the protagonist, a taxi driver, listening to a passenger who grows increasingly belligerent in a phone conversation. Soon the driver stops the cab, saying he’ll go no further. After a few choice words, the passenger gets out. Many elements of the celebrated Iranian filmmaking tradition are already there: raw human emotion and misunderstanding (Farhadi) and undercurrents of violence in Tehran’s landscape (Panahi), all observed from inside a car (Kiarostami). Yet even if he seems bound by these conventions, Mirkarimi quickly departs from them. Training his lens on the world around the protagonist, he immediately confronts him, and the viewer, with an urgent moral dilemma.

As the driver prepares to eat his lunch inside the cab, a voice emanates from the radio: “Imagine if there were a machine that allowed us to read the thoughts of others – what would that be like? If only we could see with the eyes of others!” The thought, subtly suspended in the background, materializes with full force moments later when a pregnant woman suddenly enters the cab. Distraught and seemingly injured, she asks the driver to take her to the hospital. The first look he gives her is one of mystification, a desire to understand her situation. He is immediately struck by her and wants to come to her aid. But as he slowly entangles himself in her convoluted circumstances, his initial moral decision becomes harder to sustain.

The central theme of Mirkarimi’s film is empathy– feeling into another person’s experience. The director develops this theme with skilful artistry, gracefully weaving in motifs, actions and words to show us how one might transcend that initial moment of connection, see things from the perspective of another, and come to care for her. The film’s experimental quality makes this exploration unique. In the silence of the cab ride, Mirkarimi patiently portrays his two protagonists and forces his audience to imagine what they’re thinking. Almost every shot speaks volumes about the characters and the world around them. Soheila Golestani’s portrayal of the pregnant Sedigheh is heart-rending, her eyes and her shaking voice causing so much empathic distress that it becomes easy to see why the taxi driver wants to help her. For his part, the laconic driver played by Parviz Parastui betrays very little through his manners and his voice; his actions mean more.

Gradually Sedigheh reveals parts of her story; we find out no one is really there for her; the mysterious man she says would help her is unavailable; we know nothing about her spouse. Left in the dark as we are, the taxi driver somehow persists in helping her through each step of her anguished journey, guided by an enigmatic sense of duty. Enduring the judgment of the hospital staff members who think he’s Sedigheh’s abusive partner, he remains by her side. He is affected by her looks, as we in the audience are. Her pain is a constant presence, and the more we find out about her story, the better we understand the urgency of compassion.

At one point the taxi driver seems to grow tired of the trouble he has to endure on Sedigheh’s account and leaves her at the hospital. But during a phone call with the man who was supposed to be there for her, he realizes she has no one, that he has to be that man, and more importantly that he has to be there for her today. He turns his car around, goes back to the hospital. What’s fascinating about this moment is that it’s here, thirty minutes into the movie, that the title appears. It’s as if Mirkarimi is only beginning to answer the question he posed just before Sedigheh’s arrival.

At the end of the day, Mirkarimi’s Today is a meditation on perspective-taking. Beyond the subtle political critique that viewers will inevitably discern through the setting, the movie is simply another expression of the universal human capacity for empathy. That it is set in a country like Iran should come as no surprise even to those who know of its culture through headlines. Mirkarimi’s work is a continuation not only of the tradition of Iranian cinema but also of great humanist poets like Sa’di, whose timeless lines so many Iranians know by heart:

Human beings are limbs of the same body,
For in creation, they are of one essence.
If time brings one of these members pain,
Other members will not remain in peace.

Today is a film that merits attention, a work of art that stays true to the ancient purpose of theatre: suffering with others in order to understand them. It is a picture that transcends cultural boundaries, a profound reflection on what it means to be human. 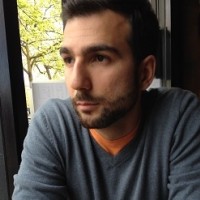 Nojang Khatami is a PhD student in political science at the University of British Columbia with interests in cosmopolitanism and social psychology. His past work has focused largely on Iranian political culture, including co-authored articles in Constellations, openDemocracy and The Progressive. In 2014, he was awarded the Vanier Canada Graduate Scholarship, which supports his research. His recent work explores the possibilities for cosmopolitan understanding across cultures through empathy and perspective-taking. He is an avid reader and writer of fiction, and firmly believes that through sharing distinct experiences, people in those societies can go beyond merely coexisting and find ways to thrive together