Why, it’s the first cattle drive ever (and, man, is it one big doozy of a barely containable herd) from Texas to Kansas along the Chisholm Trail (whatever that is… sorry, never did all that well in history) and a feud is brewing over the increasingly intolerant handling of the tiring trail hands by tyrannical head rancher Dunston (John Wayne) and his more physically slight, kinda emocore (though still pretty damn good with a gun, mind you) adopted son Matt (Montgomery Clift).

From the awesomely exciting cattle sequences (crossing the rushing river, the terrifyingly captured stampede) to the nice subversion of the classic iconic figures of the Hollywood western, to the sense of deep emotion with which the film vibrates, the fact that this incredible achievement (one of the great American westerns, at least that I’ve seen) is Howard Hawks’ very first attempt at one of these (I mean, let’s be clear though… by the time he made this go at a big John Wayne western he already had proven himself a master at the screwball comedy, the gangster picture – why, if he had never came anywhere near a western in his career he would have still solidified himself already as one of the Hollywood greats) is just another ringing endorsement of how flexible a lot of these classic Tinseltown filmmakers were (and I include Ford in that group).

It seems obvious to me that what a director like Hawks ultimately thought of himself as (or certainly acted as, consciously or not) – was primarily a storyteller, with his camera placement and aesthetic there to capture and serve the emotions and sweep (and just as often, comic timing) of the narrative. Now, it doesn’t mean he isn’t a legitimate auteur. Like Ford (and Eastwood to come, a director who clearly modelled himself after the Hawks and Ford models), he (and they) are ones. It’s in the recurring motifs and devices. For instance, it’s always slightly confusing to me how this term ‘revisionist western’ is understood as if this was some later occurrence (as if Sam Peckinpah practically created it in 1967 with The Wild Bunch). Recognizing the tentpoles represented in the Hollywood western (for instance, Jimmy Stewart as a figure of gentle ‘liberalism’, John Wayne of tough ‘conservatism’ and staunch heterosexuality) and then playing those against each other was one of the traditions almost immediately of the Hollywood western, leading into all sorts of status quo challenging terrain. In other words, the revisionist western, challenging and critiquing the mythos, was right there in the early days of the genre, and, man does a film like Red River confirm it.

There’s Dunston, in the form of the physically imposing patriarchal presence of Wayne, revealed less the benevolent form of tough love from yesteryear and much more a destructive fascistic force that needs to be physically overcome (or at least cowed and put in his place) by none other than the more thoughtful modern man as represented by Matt — and keep in mind, Matt is played by the much more physically slight, why, dare-I-even-say, heterosexually-suspect Montgomery Clift (okay, what I’m really saying is that the pretty young actor was known as flame-on gay, which Hawks almost assuredly had heard about as the rumor mills have always been thick in Hollywood) – in order for a sense of true equal community to emerge. 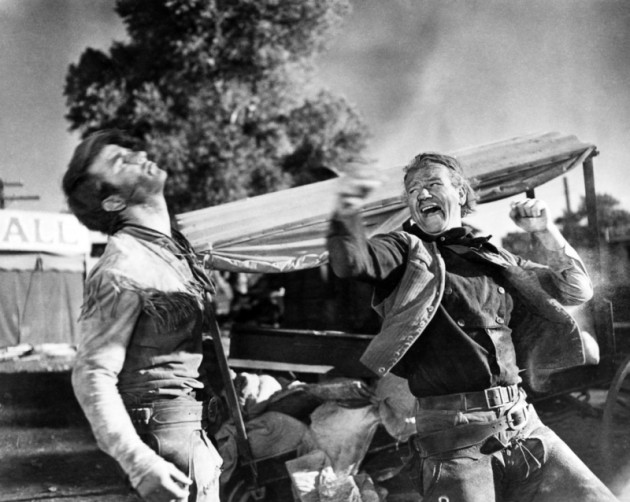 The final battle against fascism

While the two main roles for the women in Red River are relatively small as compared to our male heroes, and, let’s be honest, their presences within the narrative are there to act as tools for the men to react (and, in Dunston’s case, grow) off of, I’d argue they each are granted a surprising agency, with their characters blurring the traditional quasi-Christian Americana Madonna (asexual wife/mother) and Whore (prostitute/temporary lover) paradigm. The first, Dunston’s love interest Fen, is surprisingly sexually frank (well, as much as can be expected in a 50’s western anyway), with a tasty hint of provocation in her intimate writhings against him (with Dunston looking like a stiff plank against her… not surprising, as I’ve never seen Wayne look particularly comfortable in a movie against a hot lady) enticing Dunston not with a goal to be a wonderful wife or mother, but that she’ll ‘fill his nights’ if he takes her along on his drive to Texas. And while she soon dies, cut down by injuns, it’s narratively not as punishment for her open desires, but due to Dunston’s bad decision of not letting her along, a decision Dunston is haunted by (and is allowed to achieve penance for by the film’s conclusion, in which the film’s next important lady, the dance hall girl and Fen’s narrative compliment Tess, displays a willingness to stand up and face the fighting men as an almost equal, leading Dunston to tell Matt he should marry the girl).

Fen stands as the Mother, but one allowed sexual desire, and Tess is the whore (not only is she a dance hall girl, but it’s implied she is likely a prostitute), yet is allowed an eventual future position within the family as likely wife and mother.

Equally as amazing as this being Hawks’ first western is that it’s also Clift’s film debut, and, while he is relatively subdued in his performance (other than in all that hilariously barely-contained man-love ‘you show me your gun, I’ll show you mine” stuff going on between him and fellow handsome young gun-slingin’ John Ireland, in which both performers seem to both be having an exciting time), his presence is perfect against that of the bigger-than-life Wayne (who you really have to wonder, if the always image-conscious Wayne quite understood what he was actually playing in this film – i.e., the bad guy — well, whether he did or not, he’s really great in the film doing it). 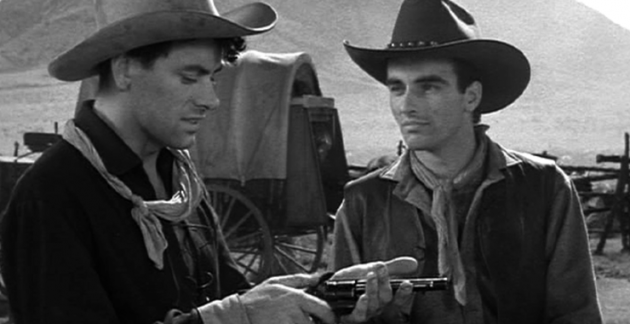 My guns bigger than yours!

While the sweeping sense of optimism pervading the film, a tale of a more tolerant and sharing community growing out of the destroying of fascism, clearly has the hallmarks of post-war American propaganda… it’s so wonderfully (and excitingly) crafted, it was hard not to fall under the spell. I didn’t resist.

A go at a new genre and another masterpiece. He’s not just Scarface, or Only Angels Have Wings, or Bringing Up, Baby… why, he’s Red River too. Amazing. They don’t make ‘em like Hawks anymore, that’s for sure.