Director Waters’ favorite drag queen Divine (who Waters only-half cheekily claims had aspirations to be a literal ‘monster’) and her trailer trash family of criminal perverts and grotesqueries (literally, as in an old abandoned trailer in the middle of nowhere surrounded by a few haphazardly located cruddy plastic pink flamingos in the dirt — hence, the title – with its inhabitants gleefully engaging in all sorts of aberrant behaviour) spitefully compete — against a backdrop of gleeful and familiar B-side 50’s rocking songs – with the reprehensible foot-fetishists (who we witness passionately doing their saliva-dripping, toe-sucking during a sex scene) Raymond and Connie Marble over who rightfully deserves the mantle of the ‘filthiest people alive’. The Marbles stand proud with their black market baby ring, in which they kidnap innocent women, drug them up over time and have their man-servant impregnate them, then sell the newborns to unsuspecting lesbian couples, all as a means to help finance a heroin operation, selling drugs to inner city youth (I mean, if that isn’t stiff competition, I don’t know what is!). 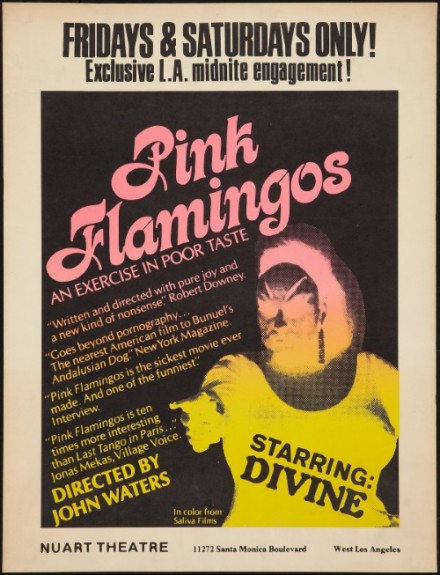 While the male patriarch of the Marbles spends his free time exposing himself (with a very long piece of meat tied to his dick for reasons unknown) to unsuspecting girls in a park (though eventually running off in sheer horror at the sight of a woman who he is first excited by as she flashes her nice breasts at him in response, before then opening her dress and revealing her swinging penis) and, with the help of Connie, sending his bowel movements in a box to Divine and her filthy clan, Divine steals a slab of raw red meat from a supermarket by stuffing it high up between her heavy, likely wet and sweaty groin, Divine’s son Crackers (we know he’s the son as he calls Divine ‘momma’… even though she’ll later suck him off in a moment of ecstasy over their shared filth as they lick and douse the entire inside of the Marble home with their saliva) has literal chicken-crushing, claw scratching sex in a dirty henhouse and Divine’s mentally challenged, obese and seemingly immobile mother Edie (otherwise known as the ‘Egg Lady’) spends most of her time in her underwear in a large crib either pining for, or grotesquely stuffing in her face with tons of, boiled eggs. This only scratches the surface of the gleeful onslaught of scatological, cannibalistic, vomit-streaked, incestuous and deliberately profane acts to follow (I have to say, as enjoyable and engaging all this deliberate bad taste is, even I couldn’t look too long at the the contortionist flexing his prolapsed anus in time to a 50’s tune for a VERY long time, as the delighted crowd celebrates Edie’s marriage to the egg delivery guy… just before they dump the happily waving Edie into a wheelbarrow so the egg guy can wheel her away to her new life… which precedes the moment the cops show up, only to get descended on, ripped apart and eaten by Divine’s happy cohorts – I mean, it has to be said, they may defy every bound of good taste, but they do manage to turn everything into a party!).

My rite of passage into the Waters world of willful bad taste, rebellious transgression and determinedly anti-social behavior (while being entirely gleeful to watch – has such aberrant behavior ever been so wonderfully life affirming!?) may have taken more than half a decade, it’s been coming together nicely over the last few years. Having finally now seen the perverse treats offered up with the earlier Multiple Maniacs, Desperately Living and Polyester (with the last one in true scratch ‘n’ sniff ‘Odorama’, no less!) in various venues across North America, it was high time to experience what has always been treated as the golden chalice, the holy grail, the one that managed, despite all the odds and the boundaries of mainstream acceptable taste, to launch Waters to international heights, providing proof positive that a momentary balance in the scales of justice, however unlikely, is sometimes achieved in the universe.

Watching Pink Flamingos reminded me again (as it does with every Waters film I’ve seen), how a return to this unapologetically transgressive underground attitude is needed more than ever, to kick those politically correct 20-something entitled kids out of their safe spaces and into a recognition of their responsibility in fighting against a world of corporate status quo driven conformity. Waters work is as genuine a Q at the end of LGBT as there ever was, or could be. It’s “Oh, yeah, mainstream? You’re afraid of us? Well, you ain’t seen NOTHING yet!” It’s a challenge – an engaging ‘fuck you!” at good taste and faux upstanding citizenry. It may get gross along the way (okay, it DOES get gross along the way — did I mention that anal rosebud dance sequence?), but man is it inspiring.

And a wonderful film to bring to a close the latest annual twelve hour, 7 film Exhumed Films’ Ex-fest (I managed 6 of them, which I still think is pretty good!)… even better, surprise guest John Waters stepped on stage to introduce the film to a deeply appreciate crowd. I wanna note that Waters also provides hilariously campy commentary during the film, clearly on the side of Divine and her clan, somehow dismissing the grotesque acts they get up to, while being openly shocked and repulsed by the Marbles behaviour. Waters was joined on stage, by actress and transsexual Elizabeth Coffy, the aforementioned girl who shocks rain-coat flasher Raymond Marble into running off. She was still pre-op during the making of Pink Flamingos, hence her final beautiful credit as ‘chick with a dick’.