Michel actively takes up the role of lawbreaking pickpocket as a way to not only avoid common servile humiliation but to present his superiority and privilege as someone with the right to break the contract of the social order, as his mother dies and his friends Jacques and Jeanne (played by Marika Green, who, if I thought the young Anne Wiazemsky in Bresson’s Au Hasard Balthazar which I saw the night before was strikingly angelic, I hadn’t seen anything until the ethereal beauty of Green) desire to save him 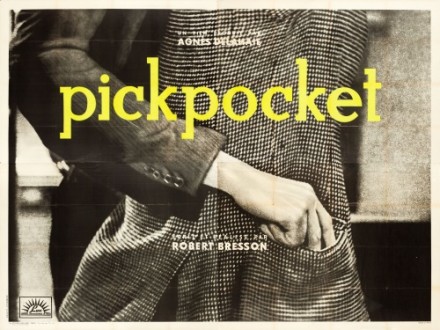 Bresson’s austere style and minimalist approach with the actors (spending much of their time looking down at the floor, only raising their eyes to briefly interact or study something) works brilliantly in foregrounding not only the philosophical implications of Michel’s approach to life, but also, almost ironically, the thrill of seeing the master pickpockets at work (in great detail). It kinda surprises me when I read reviewers only mentioning the classic Russian novel Crime and Punishment (the only one of those heavy tomes of Dostoevsky I’ve actually dared to take on) in passing as if there are only slight comparisons with Pickpocket, when in fact the entire structure of the narrative (and the characters), including the ending of salvation through love (played up even more with the infrequent but always powerful orchestral baroque music) and the pickpocket’s openly flaunting manner in detailing his belief in the privilege of the “superior” delivered directly to the policeman who suspects him of the crimes, is almost straight out of the speeches of Dostoevsky’s morally lost Raskolnikov and his antagonistic relationship with the figure of the law shadowing him.

Of the two recent Bressons, I may every so slightly favor Balthazar as a perfect match of story and vision with Christian parable, but Pickpocket is still up there as one of the great works of cinema. There isn’t even the slightest hint of the youthful posturing I often find in the other French New Wave figures of the time, as talented and influential as they were (there is a reason that Werner Herzog referred to Godard’s films as ‘intellectual counterfeit money’ in comparison with a good kung-fu movie). Bresson is the real deal, at least with these two films.